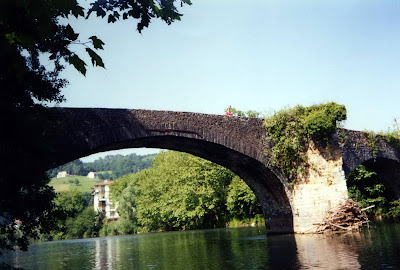 On 31 August 1813 the small Spanish village of Vera became the scene of a small action which would make a good Richard Sharpe novel.

Wellington has laid siege to the port of San Sebastian in July 1813, and Marshal Soult was determined to raise the siege before the garrison surrendered. The river Bidassoa formed the border between France and Spain. The main French attack was along the coastal road through Irun, with a second attack a few miles inland through the village of Vera.

The French offensive failed, and the 10,000 strong division of General Vandermaesen approached the river near Vera. Due to a heavy rainfall the river was unfordable, and it would be necessary to cross by the only bridge in the area.

As they approached the bridge they found it defended by 80 men of the 95th Rifles, under the command of Captain David Cadoux. The French attack was met with a determined defence by the riflemen who were positioned in houses overlooking the bridge. Repeated attacks on the bridge resulted in an ever increasing number of French dead, dying and wounded.

Cadoux held the bridge for two hours before being finally overrun by the vastly superior number of Frenchmen. It cost the French 231 casualties, including Vandermaesen himself who was killed leading his men.

Cadoux was also killed along with sixteen of his men. Another 46 officers and riflemen were wounded.

The bridge is still in a good state of repair, and a plaque was erected in 1921 in honour of Cadoux and his men. The main road is now some distance from the bridge, which is not easy to find but is well worth the effort of doing so.

You can read about our visit to Vera, and the bridge, during a tour of Wellington's battlefields in northern Spain and the Pyrenees at