North Spain
Each square on this map is 15 miles, one days march in the campaign and the size of the wargames table.   Cities and large towns are shown.   Major terrain such as mountains, rivers and large forests are also shown.   The red roads connect capital cities and are main supply routes.

The area outlined in white is the area covered by the Leon campaign phase.

This map is used for planning and to show strategic movement on the campaign diary blog. 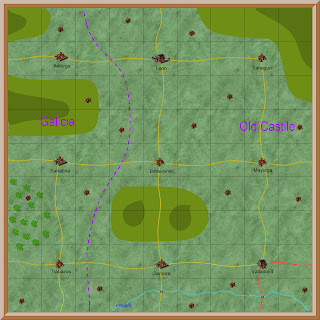 This map is the first step to transfer from the campaign map to the wargames table.

There are nine cities or large towns shown.   The major cities are shown with a cathedral symbol, the rest with a group of buildings.   Walled cities and towns are shown.

The secondary roads are added in yellow.  These connect cities and major towns.   They are secondary supply routes.   Finally villages and large farms have been added.  These are not named, but will be on the final wargames map.

This map is used for campaign movement and to show tactical movement on the campaign diary blog. 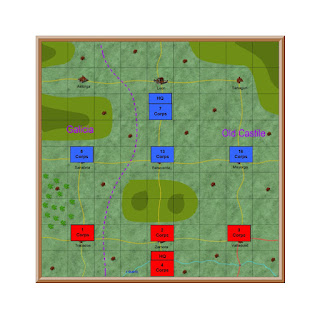 Leon Phase Start Deployment
The initial deployment for the Leon Phase of the 1813 Campaign is as shown.   Only one corps is allowed in each square, and one corps can deploy on one scenic square on the wargames table.

A corps can move three squares in one campaign day providing they use a road.

Three French and three British corps are within one day’s march of each other.   Both armies have one corps in support.

When a corps enters an adjacent square to an enemy corps a battle is declared.    The empty square between them is “no man’s land”.   When the battle is transferred to the wargames table there is always at least one square between the two corps.   This is 24” on the wargames table, which is slightly longer than long range artillery fire and light cavalry charge move.
Posted by thistlebarrow at 20:21 2 comments: