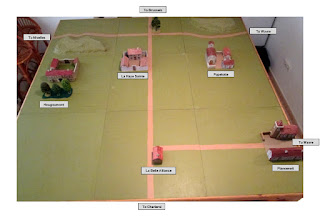 I have decided to attempt a game based on Waterloo to trial whether the whole project will work or not.   It is perhaps a little strange to game the last, and one of the largest, of the Napoleonic battles, as the first of the series.

There are two main reasons why I have done so.

First I know the battle so well that there is very little research required.

Second if I can make it work for this one the rest should be quite easy.

The table is very basic and does not attempt to recreate the historical battlefield.
The roads are correct and the main buildings and villages more or less so.  I have used buildings from our collection, so they do not look like the originals.   I have however put Wellington’s tree on the cross roads! 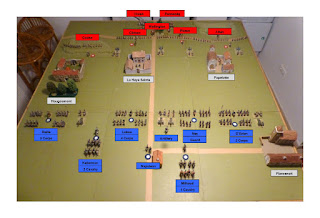 Table at start of wargame

I have not made any attempt to follow the historical order of battle.   Wellington’s army is the standard one I use for the British/Portuguese in my 1813 campaign.   I have reduced each corps from four to three infantry brigades.   And the Portuguese brigade in each corps becomes a Dutch/Belgian brigade.   This gives me 96 infantry, 16 cavalry and 16 gunners with 4 guns.

Napoleon commands the same army as he does in the 1813 campaign, with one exception.   The Polish corps which forms part of his First French Army in the campaign, has been replaced by the 2nd French corps.  This is because I wanted all of the French army to be French brigades.   The four corps are full strength.   There are 128 infantry, 16 cavalry, 16 gunners and 4 guns.

So the French 32 more infantry than the British.

Unlike my campaign games I have collected the four cavalry brigades on each side into two corps and given each a commander.   I have also created a very small “Grand Battery” for Napoleon by taking the artillery from the Guard and 4th corps and putting it under the command of an ADC.

This is all for colour, and to help me recognise the game as similar to Waterloo.   In fact I am quite pleased with the visual look of the table.

The real test will come when we play the wargame.

You will find more information here
https://nearlynapbattles.blogspot.com/
Posted by thistlebarrow at 11:38 7 comments:

End of Visit, End of Campaign 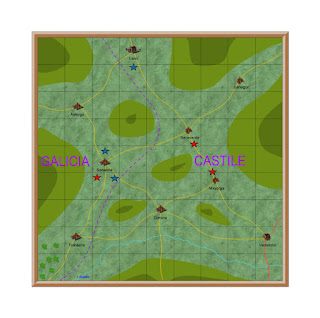 The family have departed at the end of a very enjoyable summer visit.   The house is quiet as a tomb and there are large piles of towels and sheets waiting for the washing machine.   We try to adjust back to our normal routine.

In the middle of the visit the house is like bedlam.   There seem to be children everywhere, the TV is on full volume showing Shrek but no one is watching.   I long for a bit of peace and quiet.   But now that I have my wish it is impossible to relax, the house is too quiet.

So a quiet wargame is out of the question.

My wargame activity is still restricted to the computer.

We live inland about an hour from Benidorm, so there are quite a few family attractions within an hour drive.   Even on hot summer days places like Mundomar, Terra Natura and the water park at Aqua Natura attract the younger members.   For the evening Calpe with its long beach is less than half an hour.

As a result we managed to complete the sixth and final battle of our Leon campaign.  With the end of a campaign phase there is a lot of work recording the details of the campaign and updating the records.   It is a task ideally suited to my present circumstances.

Within a week or so the house should be returned to normal and us to our much loved routine.
Posted by thistlebarrow at 10:50 No comments: