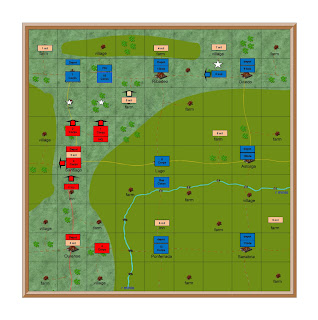 Campaign Map on 23 October 1813
Despite his defeat at Lugo, Wellington orders an attack on Corunna
He is determined to strike at the French before they can regroup
3rd corps, retreating from Lugo, is ordered to rally at Santiago
This town will now be his main base and supplies are moved from Ourense

The French have advanced beyond their depots and must reorganise
Four days supplies are sent from Oviedo, to resupply 7th and 16th corps
However the convoy is captured by guerrilla and the escort routed
The last thing that Suchet wants is a battle at Corunna 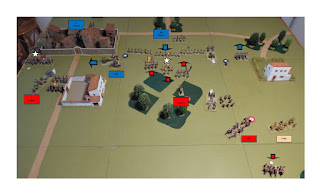 2nd corps is ordered to attack Corunna
The infantry attack, supported by artillery
The leading brigade inflicted 10% casualties on the garrison
Wellington takes command of their hussar brigade to form his reserve

1st corps attacks the Italian corps in the open ground to the right of the town.
To do so the infantry have to advance through the dense woods
Meanwhile the artillery and cavalry move forward on the right
The cavalry receive 10% casualties from artillery fire
They are immediately charged, and routed, by the Italian hussars
Wellington moves his reserve cavalry to support 1st corps
The infantry attack on the Italian infantry is disordered by the woods
As they attempt to regroup the centre enemy brigade moves forward
The Italian line engages the British column in a firefight, which they win

With two brigades in rout Wellington accepts defeat and retreats

Campaign Notes
Both armies were evenly matched in this battle

The French held a strong position
Corunna is a fortified town and had a full garrison of two brigades
That left two brigades and the artillery to counter any attack
With 20% casualties their cavalry was too weak to deploy, and hid behind the town

Consequently Wellington had a difficult task

Only on the British far right was there room for cavalry
So Wellington took command of 2nd corps hussar brigade to form his reserve.

First blood went to the British when they attacked the left town section
It was held by a conscript brigade, and the loss of 10% casualties reduced their combat ability

Very enjoyable wargame, but a terrible result for the campaign.

The British really needed to win this battle, to prevent being forced to retreat south
By doing so Wellington abandoned his last chance to regain the initiative
He would now have to concentrate at Santiago and await the next French attack
Soult could now take his time to reorganise his depots and replace his battle casualties
He would have to attack Santiago to win the campaign, but he could do so when it suited him to do so.

Posted by thistlebarrow at 11:52 4 comments: 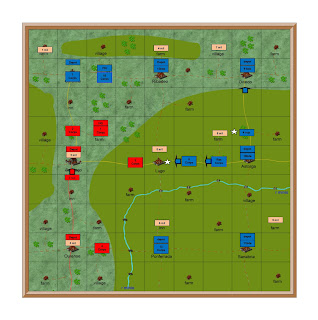 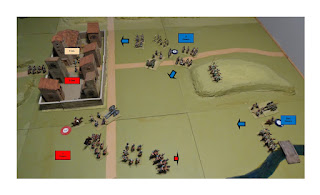 Posted by thistlebarrow at 11:48 2 comments: