The new campaign is based in central Germany between Marshal Davout’s Second French Army and General Wittgenstein’s Russian Army.   It is the fourth phase of this ongoing conflict.   The French won the first and second phase, but lost the third.
They open this phase determined to regain lost ground.

The previous three phases produced twelve battles to wargame.  The map above shows the location of those battles.    This resulted in seven wins for the Russians and only five for the French.   Despite these results, the French won two of the three campaign phases.  This illustrates the advantage of a campaign to produce wargames.   Each battle/game contributes to the final outcome.   Each game also has an effect of the remaining battles in the campaign, which adds variety.  And the actual campaign is often not decided until the very last battle.

With an extended and long running campaign such as this, you get to a stage where the previous phases (or mini campaigns) determine the shape of the next campaign.  I simply read the history of the campaign to date, and the next phase becomes obvious.   There is no need to create a background and objective, it is determined by the previous phases.

The introduction to the Eisenbach Campaign is now on the campaign diary blog.   It contains a short history of the campaign in Central Germany, plus the strategic and tactical maps for this campaign.   There are also photos of the two armies and a basic order of battle.

Each army has only 160 figures.    There are 128 infantry, 16 cavalry and 16 gunners with four guns.  Quite a small number of figures to represent four army corps.  It also means that a relatively small table is sufficient to fight multi corps games.    My table is 6x6 foot, which is about right when the whole 8 corps, 320 figures, are present.

I know that a lot of Napoleonic wargamers prefer much larger numbers on the table.  Most current wargame rules have battalions of 12 or even 36 figures.  Many will feel that it is not “right” to represent a brigade of 4000 men with only 8 figures.   But it is this compromise which has made it possible for me to wargame with multi corps armies on such a small table and, much more important, to enjoy the experience.

Next week I will explain how I progressed from 36 figure battalions to 8 figure brigades. 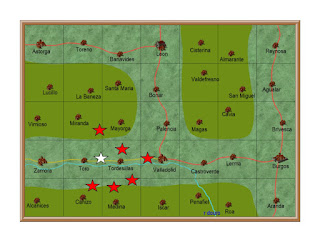 Just completed this campaign, which was set in Northern Spain, between Wellington and Soult.   It was the fifth phase and ended in a much needed victory for the Anglo-Portuguese army.   Wellington had lost three of the previous four phases, and was forced to retreat into Portugal.   This victory allows me to continue with the map of Spain, rather than yet another retreat into Portugal.

The campaign lasted for nine weeks, and 14 campaign days.   There were seven battles, and Wellington won six.   The seventh was a draw.

The final battle lasted two days.   Wellington failed to take the city of Valladolid on the first day, but started the second day with more cavalry and artillery than the French.  This should have led to a quick victory, but his luck (and my dice) deserted him.   He did win, but it really was a very close run thing.

A summary of the Tordesillas campaign, and also the campaign in Northern Spain to date, can be found on the campaign diary blog 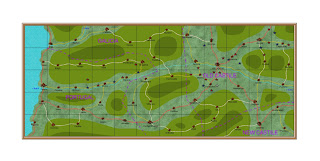 The campaign started in April 2009.   It was designed to provide me with interesting battles to wargame, and has well achieved its aim by providing 237 battles so far.   It covers Germany and Spain, and has five independent campaign areas, each with a French and allied army.

The campaign has run non-stop, though it has changed and evolved during that period.   The maps started as rough hand drawn and are now computer generated.   The rules have been amended much, but remain basically the same.

It started as a solo campaign, but was converted to PBEM in October 2009.  It reverted to solo in February 2016.

The current Campaign Diary Blog has run since December 2015, and has links to the previous thirteen blogs which covered the earlier stages of the campaign.

The greatest upheaval has been reverting to solo from PBEM in February 2016.   I found that I was losing interest in the campaign, and in addition was finding it difficult to fill the ten campaign command posts.  Replacing players was an ongoing problem, with 84 players taking part during the six years it ran.   I always managed to fill the posts, but I found it to be a thankless task and gradually lost interest.

Since I reverted to a solo campaign seven months ago I have found a new enjoyment in the campaign.   I can direct the campaign to provide the types of battles I want to wargame.  Rather than have to fight uneven battles I can simply refuse battle and give ground.  I can use the maps to select good defensive battle positions, resulting in more interesting and enjoyable wargames.   In effect it has given the campaign a whole new lease of life for me.

Posted by thistlebarrow at 11:08 No comments: