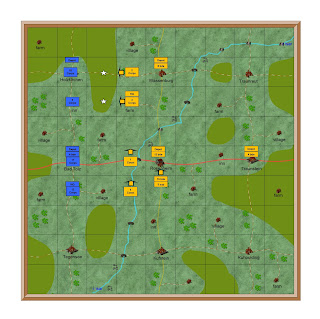 Campaign Map on 15 October 1813
Schwartzenberg orders a joint attack to defeat the Bavarians and force Oudinot to retreat.

2nd and 3rd Austrian corps will attack and take Holzkirchen 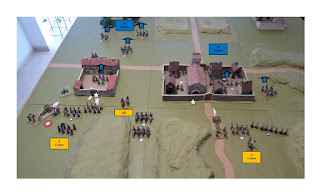 Battle of Holzkirchen
Both armies have considerable battle casualties.
The Bavarians are in a strong defensive position, and they outnumber the Austrians in Infantry

The Austrian cavalry and artillery are considerably stronger than the enemy

Schwartzen fights a cautious battle, but still manages to inflict a convincing defeat on the Bavarians and take Holzkirchen


The campaign has reached an interesting and critical phase.

Both armies have suffered heavy battle casualties, but the Bavarian army more than the Austrian army.   However as the Bavarians retreat they abandon depots and their garrisons return to their parent brigades.   As the Austrians advance they leave brigades behind to run the depots needed to bring supplies forward.

After a series of defeats the Bavarians have retreated to Holzkirchen and Bad Tolz.   They must hold both to allow them to rally, regroup, resupply and reorganise their battered corps.   If they are allowed to do so their field army will be stronger than the Austrians, and they can go back on the attack.

Oudinot is aware that his army is not only outnumbered, but also very brittle.   In addition the enemy hold two very strong defensive positions.   But if he must attack before they can recover from their defeats.  Every day he delays they become stronger.

He has already won the first battle of Holzkirchen, but he has failed to take the town.   Having resupplies 2nd and 3rd corps, he now orders them to attack the fortified town again.

The Austrians are outnumbered in infantry, but have twice as much cavalry and artillery.   The enemy are in, or behind, the town and an inn to the south.   Oudinot orders his artillery to move forward, with the infantry in reserve and out of enemy artillery range.

He then creates a cavalry reserve by combining both brigades under his personal commend.   They advance in the centre, and pin the single Bavarian cavalry brigade.   He then sends one brigade to charge the single Austrian artillery brigade.   This is a limited risk.  If the cavalry fail, he will still have one brigade to counter the enemy brigade.   In fact they capture the Austrian guns and rout the gunners.

The Austrian artillery can now approach within short range of the two enemy strongholds.   They pound the garrisons until they break and rout.   The supporting Bavarian infantry are brittle from battle casualties.   They must test morale if within 4” of a rout, which two brigades are.  Both fail and rout.   More brigades within 4” of them must now test morale, and the rout spreads

The battle ends abruptly, with seven of the eight Bavarian brigades in rout

The Bavarians suffer 1100 casualties, the Austrians none

In effect the game was decided by the Austrian artillery.   They needed 9 to hit the garrison with 2D6.  By move 6 they had two batteries firing each move, and the game could go on to move 12.  In fact the Bavarians routed on move 8.

If the dice had gone against the Austrian artillery, Oudinot would eventually have to launch an infantry attack.   This was full of risk, because the enemy infantry were behind stone walls and were anyway stronger than the Austrians.   If one Austrian infantry brigade routed it was likely that it would be their army who ended the game in full rout, not the Bavarians.

Once more the luck of the dice was with the Austrians.   But it was still a fun and interesting game, because both of us were aware that it could so easily go either way.


Posted by thistlebarrow at 12:26 No comments: