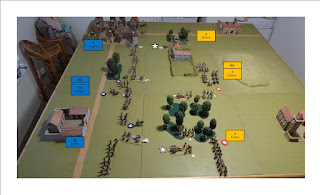 We had an interesting problem during our current wargame.   Two good dice throws, or bad depending on which side you were on, effectively ended the game on move 5 of 12 moves.   Worse still it would result in an early and unsatisfactory end of a campaign phase.   We were faced with the decision to accept the dice, or to ignore them and roll again.   Let me explain.

This was the fourth battle in the campaign phase.  We would normally expect to have about eight.   The Austrians has lost the previous three battles, and really had to win this one.  A defeat would result in a premature end of the campaign phase.

It was a large battle with three corps per side.

The Bavarians were defending.  They had 9 infantry brigades, 3 cavalry brigades and 3 corps artillery.   They only had 1 casualty on one of their infantry brigades.   And they held a large city, easily defended.

Although the Austrians had 10 infantry brigades against 9 Bavarian brigades, they had more casualties.   Each casualty reduced morale and combat by 1 on each dice throw.  So 2 casualties makes for a very weak brigade, quite likely to break and run if forced to test morale.

These artillery casualties meant that the Austrians could not fire this move, and an infantry advance would screen the guns.   Their cavalry could not charge, because two brigades already had one casualty each.   Their only option was for the infantry to attack unsupported by either cavalry or artillery.

We were tempted to ignore the whole move and play it again.  But that would defeat the whole purpose of the dice roll.   But accepting the result would mean an early end to the campaign.

What would you have done?

We decided to refight the whole wargame and hope for a better result second time around.
Posted by thistlebarrow at 20:09 2 comments:

Summary of Campaign in North Germany

At end of each campaign phase I do a summary of the whole 1813 campaign in that area.   This is so that anyone visiting the Campaign Diary blog can go straight to the summary page which is always up to date.

This summary has a map of the campaign area, and shows all battles fought to date.   Each battle fought is indicated by a coloured star.   In this area blue indicates a French win, and grey a Prussian one.   This simple map gives a clear picture of what has happened since the start of the campaign.

This is followed by a short introduction to the campaign, and an even shorter description of each campaign phase fought so far

These numbers refer to the Labels on the right side of the blog.

There are a number of blogs covering different parts of the campaign.  The current one covers the period from the Armistice on 12 April to 26 September 1813.   In this blog alone there are already 549 blogs.

With such a mass of blogs it would be very easy to lose track of the whole thing, and only be able to read the last few blog entries.   But with this index it is possible to find specific important blogs.

For example by clicking on Label 01 you will find the introduction to the whole 1813 campaign.

Label 14 will take you to the last battle report of the campaign in North Germany.  But by clicking at the bottom of the page you can go to the previous battle, and so on until you reach the first battle of the campaign.

I doubt if anyone actually carries out this type of research.   Certainly I have not done so.  But I get a lot of satisfaction knowing that if anyone wanted to do so they could with relative ease.

Posted by thistlebarrow at 10:22 No comments: 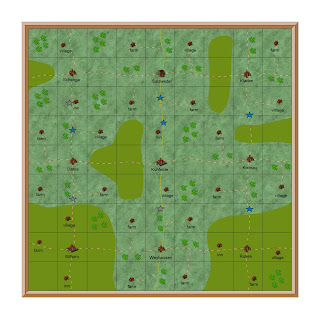 Because of the almost constant fighting the supply problems were great in this campaign.
That, more than the frequent battles, made for an interesting campaign.
Posted by thistlebarrow at 10:16 No comments: