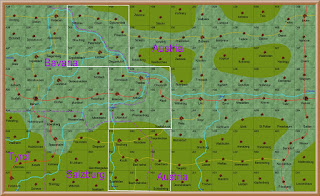 Busy week working on the maps for the next phase of my 1813 campaign, which will be set in the south of Germany.

This is the strategic map which shows the three tactical areas in which the Danube phase will take place.   Each map covers an area of 15 miles, which is one days march in the campaign.

The three areas outlined in white are the tactical areas. 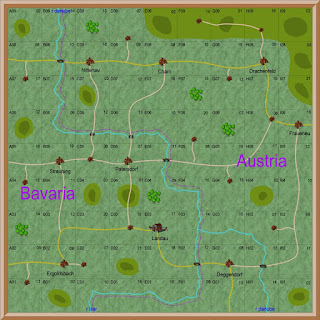 Each square covers an area of 5 miles.   Each square can be represented on the wargames table by one of my 2x2 foot scenic squares.

Each corps has two divisions and only one division is allowed in each square.

Landau is the major city on this map and will be the campaign objective for both sides. 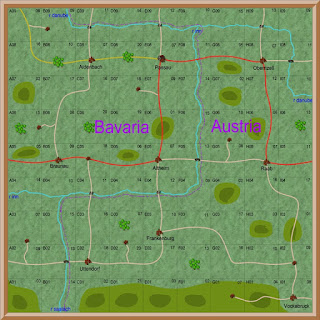 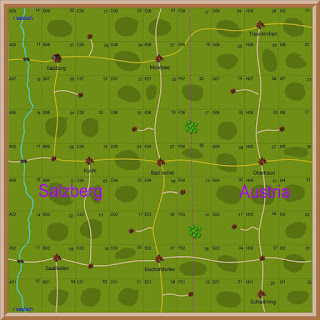 The terrain is very different on each of the three campaign areas.   The southern area is very hilly and will prove a particular challenge.

Each player will be a corps commander, and will be sent a copy of the strategic map and one of his own tactical area.

When a battle is declared I make up the table with nine squares and the centre one is the point of impact.
Posted by thistlebarrow at 20:52 No comments: 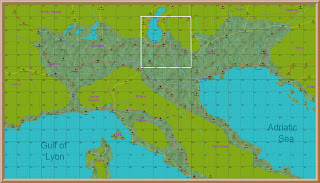 I have now completed the second phase of this solo campaign.

The first was the Piedmont campaign set in April 1796.   It lasted three months and provided just two wargames.

The phase I have just completed deals with Wurmster’s first attempt to raise the siege of Mantua in July 1796.  This one lasted two months, but provided three games.

The next phase will deal with Wurmster’s second attempt to raise the siege.

The campaign has not provided as many wargames, or as quickly, as I had anticipated.   It also takes more time to run the campaign.  I could, of course, change the campaign to be simpler to run.   But I find I actually enjoy researching the campaign than I expected.

This is largely because Jan and I spent a couple of weeks exploring the battlefields around Lake Garda some years ago.  And researching the actual campaign brought back many happy memories.

This campaign is only to fill time when the 1813 PBEM campaign is going slow, so I only have to please myself.   But I may look at ways of providing battles more often.
Posted by thistlebarrow at 13:07 No comments: 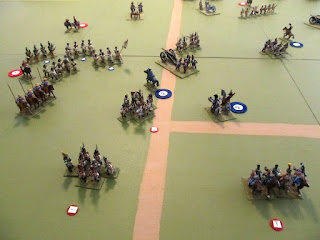 We are now back into the 1813 PBEM campaign, and have just finished the first wargame since our Christmas break.

This phase of the fictional campaign is set in northern Spain, and deals with Wellington’s attempt to take Burgos.  The French have fought, and lost, all four battles so far.   I was hoping for a French victory this time, but it was not to be.

Our wargame rules rely heavily on command and control and dice, and this results in very unpredictable wargames.   The odds are against the Spanish, but only slightly.

Our latest wargame had the French corps in a good defensive position at Pancorbo, defending the main road from Burgos to Bayonne.   The British division arrived at the start of move one, but the Spanish did not arrive until the start of move five.   The British took a battering from the French artillery whilst they waited for the Spanish to arrive.   It looked like I would get my wish for a French victory.

Then it all went “pear shaped”.   The Spanish have a very brittle morale, but for this to be tested they have to receive casualties.   They only had one casualty throughout the whole game, and then they rolled a high morale dice.

The French were attacking the Italian division, who could do no right.   Their cavalry lost a melee with poor quality Spanish lancers.   Their artillery failed to hit the Spanish infantry columns, even at canister range.   Their skirmisher and volley fire failed to stop the Spanish charging home.  The result was an Italian rout.

It was one of those games where there was a high proportion of low dice, except on the one occasion when the Spanish had to test their morale.   In a non campaign game I would probably have rolled again when the French gunners rolled a total of three with two D6 at the critical moment.  But this would not be acceptable in a PBEM campaign where we are fighting the battle on behalf of the two campaign players.

The end result was a marginal allied victory.  The British division lost heavily, as did the Italian  division.   The Spanish and French divisions suffered little.  The French had to retreat, leaving the allies with a minor victory.

If you would like to read the battle report you will find it here:
http://1813campaigndiary.blogspot.com

Posted by thistlebarrow at 13:13 No comments: