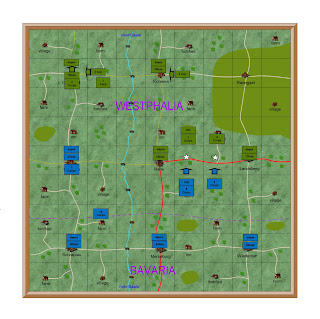 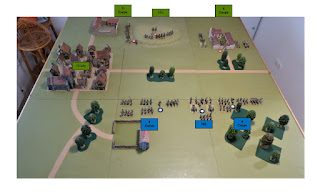 Battle of Halle
Wittgenstein has deployed his army to hold the road between Halle and Landsberg.

Davout creates an artillery reserve by combining the guns of both corps.  He then orders 5th corps to pin the Russian right and centre.    6th corps attack their left, supported by the artillery reserve.

The French win the cavalry melee which opens the battle, and quickly overcome 4th Russian corps.   They then swing to the left to attack 3rd Russian corps and Halle.

Campaign Notes
In our order of battle we have one commander in chief (CinC) and four corps commanders.

The role of the CinC is to allocate objectives to each corps commander and to regulate how aggressive they are.   Only he can change the objective, and only he can increase the tempo from engage to attack.   On engage orders the corps commander can skirmish and volley fire, but he cannot charge and engage in hand to hand fighting.   The wargame rules make it difficult to inflict heavy casualties when on engage orders.   But hand to hand fighting on attack orders are usually decisive.

This works well as it prevents each player reacting due to the “helecoptor view” of the table.    The corps commander has to wait to receive orders from the CinC to change from a skirmish to an all out attack.

The problem is how to move the CinC around the table so that he can issue the all important orders.   Our wargames table is 6x6 foot.   The CinC can move a maximum of 16”.   So it would take 4 game moves to move him from one side of the table to the other.   In a 12 move game this makes command and control very difficult.

We have experimented with allowing him a longer move, but that is equally unrealistic.   We have also tried using ADC with the same 16” move.   But whatever we do we end up with too long a delay to react to changing circumstances.

So we have changed the role of the CinC.    We have allowed him to take brigades from the corps under his command to create a reserve.   This gives him an active role, and adds a new element to the mechanics of the game.   It also gives a big advantage to the player who has him present for the game.  This in turn makes his location on the campaign map more important.

Corps commanders must still carry out their original objective, and only the CinC can change it.   But the corps commander can now change his orders from engage to attack.   However to do so he must use his own command points to do so.   He gets one command point for each brigade under his command.  He also gets one, two or three depending on whether he is a poor, average or gifted commander.   To change from engage to attack takes three command points.   So there is still a penalty for changing the tempo of his attack, and the poorer the general the greater the penalty.

We have used the new system for four games and it seems to work well.

Posted by thistlebarrow at 11:51 2 comments: 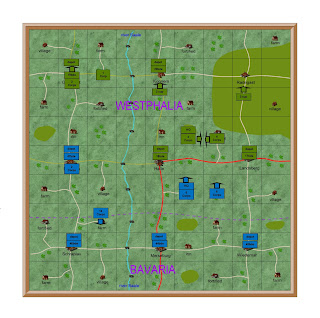 On the west bank Schraplau has insufficient supplies to support 2nd and 14th corps
2nd corps take control of the abandoned Russian depot, and can resupply
However 14th corps must retreat to be within supply range of Schraplau and Merseburg.

Eisleben was his only depot on the west bank.
He orders 2nd corps to retreat to Gerbstedt and set up a depot there
But this is not enough to resupply both 1st  and 2nd corps
He moves supplies from Halle to Konnern and Landsberg to Radegast

The French advance towards Halle and Landsberg threatens the depots there
He takes command of 3rd and 4th corps and moves them between the two depots
He must hold both depots until he can remove the supplies there.

It normally takes much longer for the supply system to become so disordered.   However in this campaign the river Saale adds a large extra problem.

The French need to take Halle and the bridge to Eisleben.   They can then move their depots forward, and communicate with the two wings of their army via that bridge.

Until they can do so, they must ensure that all corps remain within three days march of a depot with sufficient supplies.   This is not a problem on the east bank.  But on the west they only have one established depot, that is at Schraplau.   This is sufficient to supply one corps, but not two.

They have established a new depot at Eisleben, but it will take a few days to bring sufficient supplies forward from Merseburg (the main French depot).   In the meantime 14th corps has to retreat so that it is within supply range of Schraplau and Merseburg.

The Russians have an even greater problem.   Their main supply depot is at Landsberg.    They started the campaign with only one depot west of the river, that was Eisleben, which they have now lost.   They have established a new depot at Gerbstedt, but that is three days march from Landsberg.   Worst still, they are now in danger of losing both Halle and Landsberg.
Wittgenstein has sufficient vehicles to move four days supplies up to three squares each day.   He is trying to move as much as possible to Kommern, from where he can resupply both sides of the river.

It seems likely that the French will attack between Halle and Landsberg.   This will force Wittgenstein to choose between fighting to save the depots at both towns, or retreat to concentrate his whole army Gerbstedt-Kommern-Radegast.
Posted by thistlebarrow at 13:14 4 comments: 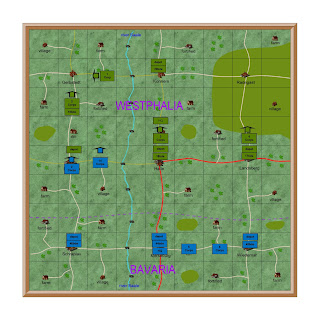 Posted by thistlebarrow at 10:56 2 comments: 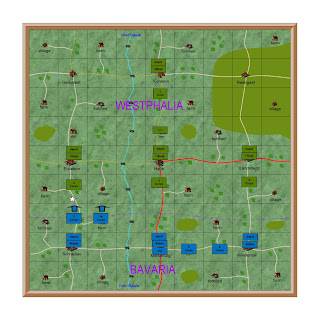 Davout opened the campaign by ordering 2nd and 14th corps to advance on the west side of the river Saale.   His aim is to outflank the concentration of Russian corps in and around Halle.
2nd French corps is leading the advance, and clash with 2nd Russian corps just south of Eisleben.   14th Westphalian corps is moving in support of them, but will not arrive on the battlefield until midday 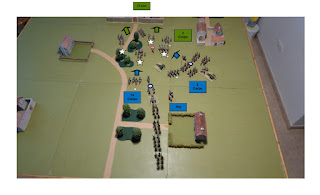 Battle of Eisleben – End of Wargame

2nd Russian corps have orders to hold Eisleben.   They are aware of the approach of 2nd French corps, but not that they are supported by 14th Westphalian corps.    They will not be aware until they see them enter the table.

The Russian corps is broken and withdraw with five of their six brigades in rout.

Campaign Notes
The French plan is to advance two corps to the west of the river Saale, and destroy the single Russian corps before they can be reinforced.

The French are unaware of the location of the four French corps, and will only be able to react when they make contact.   By then it should be too late to save 2nd Russian corps.

For this plan to work they must inflict heavy casualties on 2nd Russian corps before they can either join the main army, or receive support from them.

This battle is their best chance to do so, however they only inflict 700 casualties, and lose 200 of their own.

They have won the first battle, but it is not a convincing victory

Not a great start for the French
Posted by thistlebarrow at 11:54 2 comments: