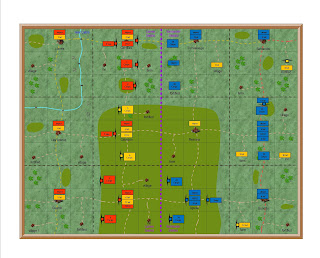 He orders them to retire to Cabezon in Llanes district

However earlier guerrilla success has left all depots short of supplies.

For six corps this is a total of 24 days supplies.

In addition the combined depots must carry another 6 days supplies, making a total of 30 days

If the total of both corps and depots is less than 30 days, the balance is delivered to the main depot

For the French army this is Santander.

At present each depot holds only one day’s supplies, with Santander holding 14 days

Or supplies must be moved from Santander to an appropriate depot

They can attack any convoy moving to either Torrelavega or Medina

Clearly the campaign has run its course

Posted by thistlebarrow at 12:06 2 comments: 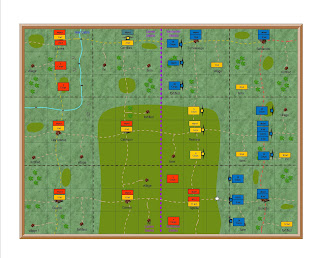 Soult must concentrate his army Santander-Medina-Soncillo

10th army retreat to Torrelavega to avoid being surrounded

11th army retreat to Medina having lost battle of Reinosa 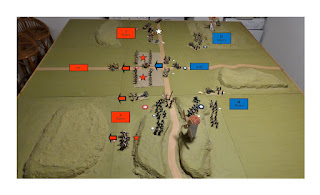 The town is held by 2 British and 1 Spanish brigade

It is attacked by four elite French and Italian brigades

The garrison is routed, and the British unable to retake the town

Marshal Soult has accepted that he cans no longer hope to take the city of Llanes, the French campaign objective.

All three of his armies have retreated into Santander district, and two of the three Anglo/Spanish armies have followed them.   His personal objective now is to drive Wellington back into Llanes district and secure the border.   This would return to the position at the start of the campaign.

To stand any chance of achieving this aim he must win the second battle of Aguilar.    This would force 2nd British army to retreat into Llanes district, and he would then only have to force 4th Spanish army to do the same.

However if he loses the battle Wellington will be able to move his whole army into Santander district, and be in a good position to take Santander itself.

He learned a painful lesson having lost the battle of Reinosa, namely that possession of the town is more important than defeating the whole enemy army.

The battle opened badly, when both French corps lost cavalry melee.   This made any attempt to threaten the British flanks impossible.   Worst still it left the British artillery covering the approach to the town.

When the situation is desperate a wise man will retreat.   Soult ordered an attack.   By sheer determination, and good luck with the dice, he pulled it off.   In just one hour of fighting he had taken the town and routed all three defending brigades.

At last some good news for the French!

Posted by thistlebarrow at 10:08 2 comments: 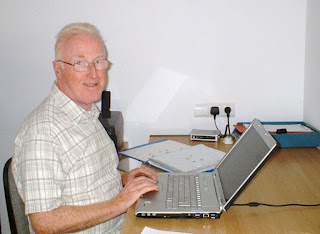 In April 2009 I wrote my first blog post, which was the start of this Napoleonic Wargame blog.   One of the very first to comment was Bob Cordery of Wargame Miscellany and writer of many wargame rule books.   He was very generous in his comments and with practical advice on how to write blogs.  I have followed his blog ever since (Wargaming Miscellany) and he has continued to comment and offer advice and support.    We have never met, but I would consider him a real friend.

When I read his blog this morning I was very surprised, and not a little pleased, to find that my blog was the subject of his latest post.   He commented on the small number of comments this blog receives and urged his many followers to have a look and perhaps comment.

According to his blog stats Bob has 394 followers and a total pageviews of 4,185,086.   That is really impressive, but even more so is the large number of comments he receives on most of his posts.   He has a very friendly writing style and obviously inspires interest in, and comments on, his wide range of blog posts.   I know from the other blogs which I follow this is relatively unusual.   A few bloggers have commented on the lack of response to their posts, and a couple have given up blogging as a result.

This is my main blog and covers all aspects of my Wargaming activities.

The second one is my 1813 campaign diary blog.  As the name suggests it records the daily events in my long running Napoleonic campaign.   It also has a battle report of each of the 432 campaign battles fought so far.

The third one is Jan and Paul in Spain.  I started this one to keep friends and family up to date on what we are doing here in Spain.  It is mostly a record of our hill walking activities with a U3A group which Jan and I run.

My purpose in writing blogs has always been personal satisfaction.   Long before I started my first blog I kept a personal daily diary.  It is a five year one, with a few lines for each day.  I have kept one for almost all of my adult life.   So blogging is only an extension of that activity.

Of the three weekly blogs, the easiest one to compare with Bob’s Wargame Miscellany would be this one.   According to my blog stats I have 131 followers; I have done 931 posts and have had 1335 comments.    All time visitors are 364499 and last month there were 1963.   Not in the same league as Bob’s 394 followers and 4,185,086 visitors.   But in my opinion quite respectable, and certainly more than I expected when I typed that first post 13 years ago.

Bob’s current post got me thinking about the relatively few comments I receive.   1335 comments sounds quite impressive, but it is only 1.4 comments for each of the 931 posts.   I don’t know how many Bob gets for each post, but I would suspect 5 to 10, or even more.

On the one hand I am very grateful that after all of this time 131 folk follow the blog.   I am also very grateful that 1963 of them read the blog last month.   There were 5 posts in May, so if the stats are correct 392 folk read each one.   However there were only four comments in May, and all of them from Bob.

Don’t think for one moment that I am complaining about the lack of response.   I enjoy writing the blog each week, and until I read Bob’s recent post I was not even aware that there was so little response.   If anything I was quietly pleased that I managed to have 131 followers.   It was only today that I realised there were almost 2000 visitors last month.   And none of this will prompt me to abandon the weekly blog.  It is such an important part of my Wargaming activities that I would never consider stopping it.

But it would be nice to have more comments.    I really enjoy each comment I receive, and I try to reply in full to any points raised.

So thank you all for following my weekly posts, and don’t take this one as a complaint that you have not commented more.   But if you do have any comments or suggestions about the blog, please feel free to post. 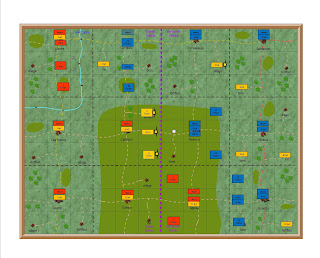 A victory will force the French to retreat from the border 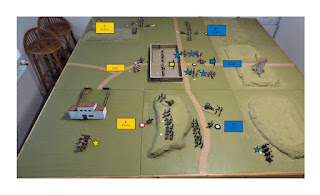 With the loss of Reinosa Marshal Foy orders a general retreat 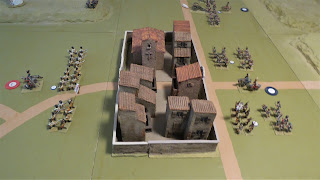 Reinosa at start of battle

It sounds unlikely, and indeed it is.

Fourth Spanish army is under the direct command of Wellington

The two corps are the best Spanish troops in the Peninsula

They do not have any elite infantry brigades, but six of the eight are average

However it was the daring tactics used by the Spanish CinC (Jan) which won the battle.

The town is held by four of the best French infantry brigades, but two have 10% casualties

This is what the French commander would have done

The Spanish commander leaves his artillery with the corps on the flanks, to contain the enemy

He attacks with three infantry brigades, without any artillery preparation

Both of his brigades have 10% casualties, but they are elite and this only reduces them to average

The first round is a draw, with all five brigades receiving further 10% casualties

The French commander sends both reserve brigades into the town

However the Spanish win the second round, again with all five brigades receiving 10% more casualties

This causes one French brigade to rout, and the second to test morale and also rout

Both rout into the two supporting brigades, who are not yet in position, causing both of them to rout also 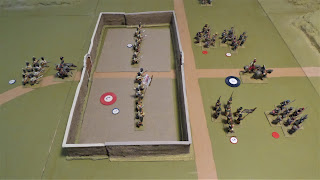 Reinosa at end of battle

The Spanish have taken the town, but all three brigades have 20% casualties

This would make them very vulnerable to a French counter attack

However all four French brigades are in rout, and there is no one available to counter attack.

Both French corps are pinned by the two Spanish corps

A very unusual result and proof that a well planned and supported attack is not always the best option!

Posted by thistlebarrow at 12:25 2 comments: