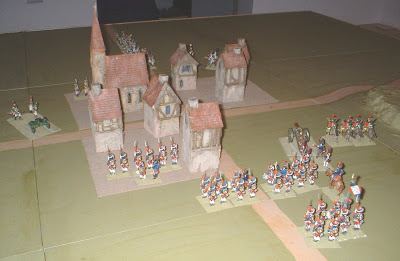 
We never did get to wargame Vimerio! You may remember that we set the game up to play whilst we were waiting for a battle to fight from the PBEM Halle campaing. Well just the day after we set up the Vimerio game on the wargames table, the campaign produced its first wargame.

Because of the hidden movement in the campaing, Naumburg was not anticipated - least of all by me. But the campaign games take priority as the campaign is paused until the battle is resolved. So I had to clear the Vimerio table and replace it with the Naumburg one.

Then after just four moves the Russian commander ordered a withdrawal. Four wargame moves are the same as one campaign move, and each player is allowed to issue new orders each campaign move. Because the two corps had not actually met on the table, the Russian player was able to withdraw his corps without loss.

The corps in the campaign are now very close to each other, and there could be another battle at any time. So we are reluctant to set up Vimerio in case the same thing happens again.

If you would like to read the (short) battle report you can find it at: