The Battle of Neustadt 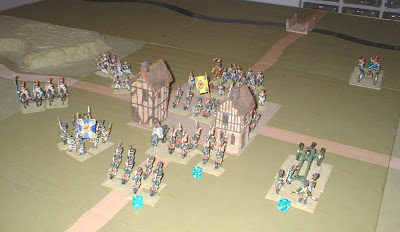 Marshal Kutuzov has finally reached the river Saale in the Halle campaign. Neustadt is a small town on the east bank of the River Saale between Saafeld and Greiz. It is unoccupied at present, but both sides are racing to take possession.

This first wargame of the campaign was a hard fought one, with the town changing hands many times and the game in dispute right to the last move.

Despite my best efforts, Jan (and the Russians) won and the French lost their best chance of outflanking the Russian position from the south.

You can read the battle report by clicking on 1813 Halle Campaign on the right.
Posted by thistlebarrow at 15:43 No comments: 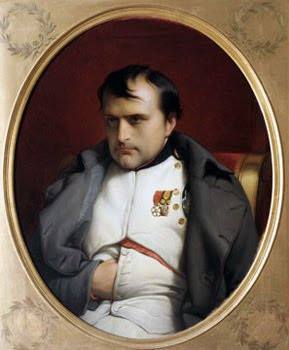 The Campaigns of Napoleon Forum has been very quiet for a few weeks. The membership is pretty good, but no one seems to want to post. It was very busy for the first couple of weeks, then it just seemed to dry up.

I did a poll to see what experience members had of campaigning, hoping that I might find an aspect which would interest them. However less than half even bothered to vote! In fact the one response I got was from someone who said that they never took part in polls which were intended to create new subjects!

I started the forum because doing a blog can be a lonely business. For me, the blog is similar to keeping a diary - which I have also done for many years. With the big difference that you are inviting strangers to read it. In the nature of a blog, there is little feedback. And when there is there is no opportunity to expand it into an exchange of views. That is the reason that I started the forum.

Most of the forums that I look at are about a rule system, or general subjects like TMP. There seemed to be a gap in that campaigns were seldom mentioned. On the rare occasion when I did raise it on TMP, it might get one or two replies and then disappear. And when I suggested starting a forum just for Napoleonic campaigning there was a lot of support. And indeed the membership if 160 plus, which should be plenty for an active exchange of views.

The problem is that they are mostly "lurkers", meaning members who read the posts but do not contribute. I did try to encourage them, but met with no response.

I hope that it will not just die from lack of interest, but I feel it easily could. I have put five or six posts on recently about starting a campaign, and used my own Magdeburg as the example. There has not been a single response on the forum. Yet each day I put one on, with a link to the Magdeburg Campaign on the blog, I get about 20 hits on the blog. So I assume that most of them have come from the forum.

I have checked the other forum I use, and find that most of them are also going through a quiet patch. Perhaps its the time of year. But I know that if I visit a forum each week and find nothing new, I give up and move on.

I guess that time will tell whether there is enough interest to keep it going.

If you would like to see what it is all about you can find it at: