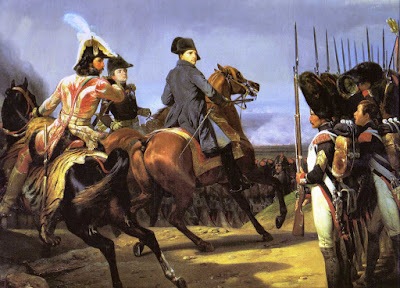 Life as Napoleon is proving much more difficult that I had imagined. The campaign is now three weeks old, but only three campaign days old, and already the "fog of war" is threatening to overwhelm the French war effort!

The first day/week was uneventful. I sent out orders and assumed that they would be obeyed. The campaign routine was that I send Napoleon's orders to the umpire, who then sends them to the wing/corps commander players. They write orders for their corps and send them back to the umpire, with a copy to me. The umpire sends back to the players a summary of what they have learned, and they send me a report based on that summary. A day later the umpire (in his role as Berthier) sends me a map showing approximate corps locations at the end of the day and a summary of any intelligence received.

On the second week/day I issued orders for the next campaign day. When I received the wing commanders orders to their corps commander it was obvious that they were not where they should have been according to the map I had received from the umpire. A flurry of email between players and umpire resulted in a change in the reporting system. In future I would send orders direct to wing commanders.

Another week/day and the confusion had become worse. The umpire informed me that two of the cavalry corps were unfit for service for 48 hours. When I asked the cavalry corps commander why, he did not know! Another flurry of emails.

I have no idea how life like all of this might be. Certainly it recreates the "fog of war", but it produces such a lot of frustration. Three days into the 1806 campaign would Murat really have told Napoleon that he had no idea what was wrong with his two unfit cavalry divisions because their commanders had not informed him?

Anyway an interesting, if very frustrating and time consuming, exercise in Napoleonic command and control. And it has made me appreciate my own simple campaign system which is designed to give me nothing more than good wargames.

I will keep you informed of how the 1806 campaign proceeds.
Posted by thistlebarrow at 08:24