All Change for Autumn 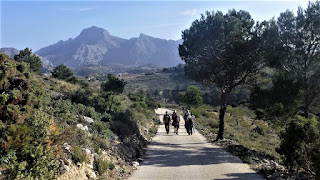 I have mentioned before that we have a different routine for the hot summer months here in Spain.   It often feels like we go into hibernation from June to September.   We are not alone, most ex pats living in southern Spain do the same.  Or at least the ones who stay here do, many go back to the UK for a summer break.

The advantage of our hot summer is that we spend a lot more time wargaming.   Like our Spanish neighbours we try to avoid the hottest part of each day by staying indoors.  This gives us the opportunity to wargame most days.   We are fortunate to have a permanent wargames table, so we can have a couple of moves when we feel like it.

Apart from wargaming our favourite leisure activity is hill walking.  We are fortunate to live in a very beautiful area which is well known for good valley, mountain and coastal walking.   Our best friends run very successful guided walking holidays, and their guests often comment that this is some of the best walking they have done.

Jan and I run two U3A walking groups, who meet each Monday and Thursday.   This gives us plenty of exercise and has allowed us to meet a large number of likeminded locals who share our enjoyment of walking.   There are many such groups here on the Costa Blanca, and all are well supported.   Because of the summer heat all of them stop walking at the end of May until the start of October.

This year we decided to see if we could walk during June and September.   The temperatures are still high, but not as bad as July and August.    We offered a shorter three hour walk once a week starting an hour earlier at 0900.  The aim was to complete a low level valley walk and be back in the bar by 1200.   They proved very popular, and not as difficult as we feared.

But now we approach the start of our regular walking season.   Back to two walks a week, each supported by a weekly blog.   So our available wargame time is greatly reduced.

During the summer I needed to post twice a week on this blog, and the 1813 campaign diary blog, to keep up with the pace of the campaign and wargaming.   Now I expect I will be able to do so with one post each week.

Many of our regular walkers did not take part in our summer walks.   So we are really looking forward to seeing them all again and catching up on their summer stories.   The first walk after the summer break is a little like going back to school and seeing all your friends after a long break.

We will miss our intensive wargaming activity, but will welcome getting out and about again.   And having less time to game usually makes us appreciate it all the more when we do.

Posted by thistlebarrow at 12:17 2 comments: 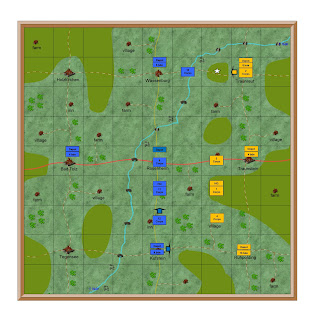 Campaign Map on 7 October 1813
Oudinot is anxious to continue his attack without delay.  But his overextended supply system will not support any further advance.  He must first move his forward depots to the right bank of the river Isar.

Schwartzenberg is desperate for a break in the fighting to regroup, resupply and reinforce his battered corps.   He does not have any supply problems, because he is falling back along his established depots.   To disrupt the Bavarian regrouping he orders 2nd corps to clear the right bank of the river in front of Wassenburg. 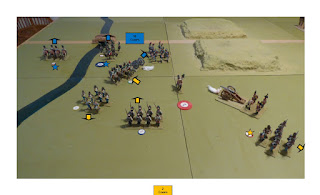 Battle of Wassenburg – end of move 12
The battle was a repeat of the first battle on 4th October.   Both corps started the battle with casualties, but the Austrians had one more brigade than the Bavarians.   Despite this they once more lost, and this time despite a number of opportunities to win.   It was a confused battle which could have gone either way.   At nightfall the Bavarians still held the bridge and rightly claimed another victory

Campaign Notes
Most single corps battles are quick affairs, and more so if they start with serious casualties.   This one would prove the exception to that rule.

So 2nd Austrian corps started with a definite advantage in numbers.   They advanced over the same ground as the earlier battle, and the Bavarians were content to wait for them to arrive.

The game opened with artillery fire.   Normally the defenders have the advantage at this stage, but not today.   The Austrians sent their artillery forward and opened on the enemy cavalry.   The Bavarian gunners had only the artillery within range, a much more difficult target to hit.  Despite this neither side inflicted any casualties.

Eventually the Austrians had to advance.   The right hand brigade suffered artillery casualties, but passed morale and continued to advance.   Next move they were hit again and halted with 20% casualties.

The cavalry now moved forward, and were immediately charged by the Bavarian light horse.   The first round of melee was a draw, but the Austrians won the second.  As the Bavarian cavalry routed over the river the Austrian infantry advanced.

It was now two infantry brigades against two.   But the leading Bavarian brigade came under artillery fire and after two hits routed with 20% casualties.   They would rally towards the end of the game, but were too weak and too far behind to make any difference.

The remaining infantry brigade found themselves facing an elite jager brigade.   With the Austrian cavalry pinned behind the infantry, the jagers were able to form line.   A firefight developed, in which both sides lost 20% casualties but resulted in a draw.

The cavalry finally found a gap and charged the jager brigade, who broke and routed.   The Bavarian gunners found shelter in the remaining infantry brigade who formed square and held the bridge until nightfall.

By nightfall both corps were battered and incapable of further offensive action.  But the Bavarians held the bridge and the Austrians retreated.

Not only did this unpromising game last the full 12 moves, but it was also a “cliff hanger” with the advantage changing sides at least three times.   At move 10 it seemed the Austrians must win, by the end of Move 12 they had lost and were in retreat.

Another very enjoyable wargame, even though I lost once again to Jan.

Posted by thistlebarrow at 11:18 2 comments: