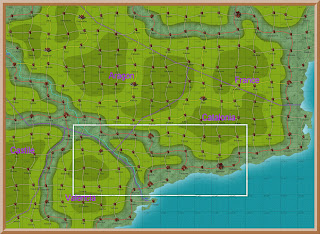 My campaign maps have undergone pretty major changes since the first hand drawn one I used when the campaign started in November 2009.

I had searched for a suitable commercial map to cover the area of Germany and Spain, but could find nothing suitable. All showed the modern road system, and this was not suitable for the Napoleonic period. Worse none showed sufficient terrain to be suitable for wargaming.
Right from the start I wanted a map which I could convert to my wargames table. It soon became obvious that I would have to make my own. My wargames table is created by using 2x2 foot scenic squares, and my map would have to reflect this.
So I decided on two maps. One would be for strategic movement, and would be similar to a conventional map. The second would be tactical and would consist of a series of squares each representing one of my scenic squares.

The hand drawn maps gave good service until I heard about Malcolm’s excellent wargames maps made with ProFantasy computerized map making. He has made his maps available for general use, and I would love to have been able to use them. But unfortunately I could not see a way to convert them to my table top.
I contacted him and he gave me much good advice and encouragement to get ProFantasy and try to make my own maps.
You can follow the progress of my map making by clicking on Label 05 on the right
Over the past two years my map making has developed and improved. But I now want to make a new set of maps which will be designed for use with the PBEM campaign and be more Blogger friendly.
I also want to try to make them more historical.
I have been working on this project since Christmas, and it is still far from finished. And as it is taking up so much of my time I have decided to post regular updates on the blog.
Posted by thistlebarrow at 10:29 No comments: 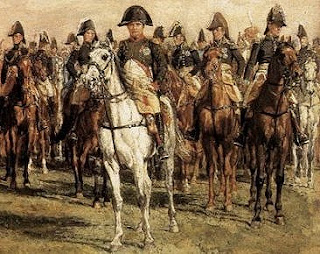 We have been kept busy wargaming the three campaign battles.

But with the campaign on hold until all three are completed I have found myself with a lot of time on my hands in-between the wargaming. This is never a good thing, because there is too much time to consider what might be improved for the next campaign.
There are two aspects in particular which I have been giving a lot of thought to.
First whether to change the order of battle for the campaign. Since converting to PBEM I have found that most of the battles/wargames are one corps per side. With our small corps this in turn means not a lot of model soldiers on the table. The rules were designed for four corps per side, and they have had to be amended to cater for the smaller battles.
I have spent some time working on using the four corps as four divisions when fighting single corps battles. This would increase the number of figures on the table. But it would look strange when there were two corps per side, or two to one.
There is also the consideration that we quite like smaller number of figures on the table. It allows for open flanks, and less figures to move around. In fact we much prefer the faster wargames as a result.
The second thing I have been working on is a new set of maps.
Over Christmas I created a new map of Europe. Again based on the AA road atlas of Europe, but this time a more accurate copy. I then want to have a series of campaign objectives on the map, each one small enough to produce a shorter campaign phase.
As the PBEM campaign rules are developed, the players have more choice and can use their initiative more. This has resulted in long periods of movement but no battles. I am tempted to reduce the tactical map, which would reduce their room to manoeuvre.
I have enjoyed the exercise, but have not come to any firm conclusions.
Meanwhile we have almost finished the third battle and hope to return to the campaign movement next week.
Posted by thistlebarrow at 18:37 No comments: 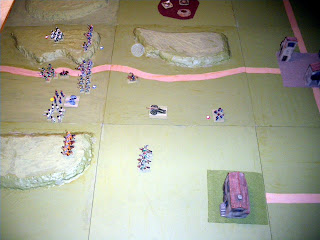 
Despite my worries about how the game would work, it turned out to be another enjoyable wargame.
The rules worked well, both for Spanish in general and also the new command and control amendments.
It was a shorter game than usual, only 8 moves instead of the usual 12. This was because it started at midday in the campaign rather than first thing in the morning. Consequently we had to play an extra move to allow the French to complete their attack on the Spanish.
Both sides were equal in types and numbers, so I would have been worried had it not resulted in a French victory. But it was not a walk over, and the French suffered light casualties. Had the game gone for the full 12 moves it would have destroyed the Spanish. And again this is what I would have expected.
The Spanish player was somewhat rash to accept a battle on these terms. And the result is what most would expect. But I am really pleased that the Spanish were able to put up a fight before the expected conclusion.
Just one more battle to fight before we get back to the campaign proper.
It is another 8 move game, but completely different from Miravat. Again both sides are equal in infantry, cavalry and artillery. This time it is an encounter battle, so a lot will depend on who moves first.
These three games are very different, and will give the new command and control rules a good test.
Posted by thistlebarrow at 12:37 No comments: 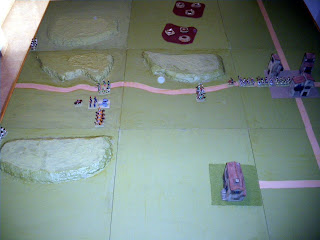 The battle of Miravat - start of game

This is the second of our three current campaign battles.
The background is a Spanish corps has surrounded a French brigade at Miravat. When they hear that a French corps is approaching they leave one of their brigades to contain the garrison, and deploy the rest of the corps in a wide valley which commands the approach to Miravat.
The wargame is interesting for two reasons.
First the Spanish have opted to fight a French corps of similar strength. In our rules the Spanish have a slight disadvantage in terms of quality of troops and commanders. But in addition they have weaker firepower and skirmish ability. At the briefing stage of the campaign I advised Spanish commanders not to accept battle unless they had a distinct advantage. Despite this the Spanish commander passed on the opportunity to raise the siege and retire, and opted to fight.
The second interesting aspect is that the battle starts at midday. Each campaign move is four hours, and three moves make a full campaign day. At the end of each move the players are advised of any enemy sighted, and they have the option to retreat if they wish.
So each campaign day is 12 hours, and each wargame designed to last 12 moves. Because this battle started at 1200 hours, the wargame only has 8 moves to nightfall. This is sufficient time for the attacker to march across the table and reach the defender. But it is not really sufficient time to fight the resulting battle.
The result is that the French commander has had to “go for it”. No time for clever manoeuvre. Probably only one chance to hit and beat the Spanish. I believe that this happened quite often in Spain, so I am not unhappy to try it out in the campaign.
But it will be interesting to see whether my rules result in a good wargame and historical battle. As always, much will depend on the luck of the dice.
If you would like to follow the battle report you will find it at
http://1813campaigndiaryparttwo.blogspot.com/
Posted by thistlebarrow at 18:51 2 comments:

The Battle of Torrente 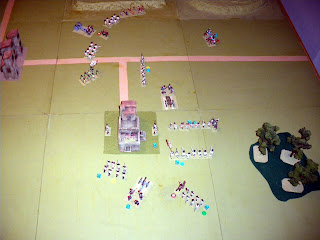 
The first battle/wargame of our Tortosa PBEM campaign has gone really well.
I have been fiddling with the wargame rules quite a lot since converting the campaign to PBEM. They were designed for five commanders per side, representing one army and four corps commanders. However the campaign keeps producing battles with one, or sometimes two, corps per side. Command points play a large part in the rules, resulting in weaker and stronger corps due to gifted commanders having more and poor commanders less command points. Obviously this does not work if there is only one commander per side.
I am considering whether to make each corps larger, and concentrate on single corps battles. This would be easy to do, but it does not allow for the multi corps battles which are so much a part of Napoleonic wargaming.
So I have been working at allocating command points to each of the five brigades and the corps artillery. They do not have commanders represented on the table, so the command points will confirm how much each brigade can do each move.
One average is rolled for each brigade, and the result is the maximum number of things it can do during that move. One point is deducted for being poor class and one for each casualty. When close the enemy each brigade can only do a maximum of two actions anyway – for example move and skirmish. So when full strength each brigade will usually have sufficient point to do anything the corps commanders might want to do. But as casualties mount up, and if a low dice is thrown, then it may not be able to do anything at all. In these circumstances the corps commander can take personal command of the brigade and use his own command points.
Torrente is the first game we have used this new system, and so far so good. It does involve more dice, which neither of us really like. But it does have a very realistic attrition effect on brigades which are taking casualties.
And it has the added advantage of making the Spanish infantry, who are largely poor class, much less effective than the better class French.
Torrente started as a sort of Baylen type battle. A French (or actually Italian) corps was attempting to relieve one of its brigades which were surrounded by a Spanish corps. As the Italians neared the town they were confronted by the Spanish corps deployed to stop them. The Italians had left one infantry and one cavalry brigade to secure their lines of communication, and this force reported a second Spanish corps advancing to cut off their retreat.
The resulting battle/wargame worked much better than I had expected. I have always found it difficult to make games with Spanish troops interesting – for the Spanish commander I mean. They are either too strong, and do not show any of the poor command and morale for which they are well known. Or they are too weak and break and run at the first exchange of fire.
One game does not prove anything. As always the dice played an important part. But the game did go very well. The detached force of infantry and cavalry managed to delay one Spanish corps, the remainder fought the other Spanish corps. The Italians lost, but casualties were pretty equal. However when the action returns to the campaign the Italian commander will be faced by two Spanish corps, one of whom has not suffered any casualties. It will be interesting to see how he manages to avoid the full strength corps long enough to recover his battle casualties.
If you would like to read the battle report you will find it at
http://1813campaigndiaryparttwo.blogspot.com/
Posted by thistlebarrow at 11:06 No comments: