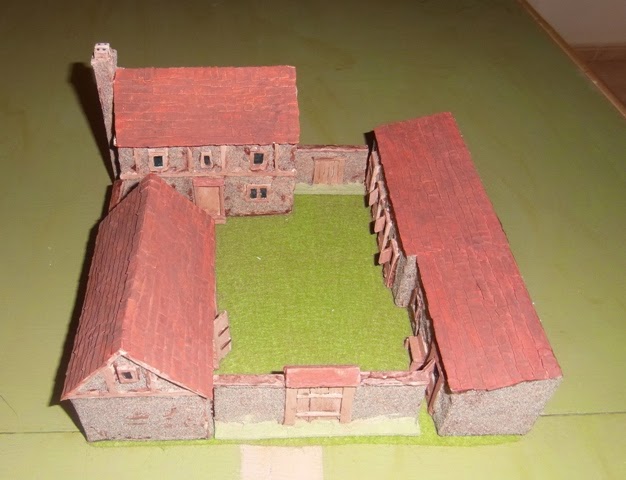 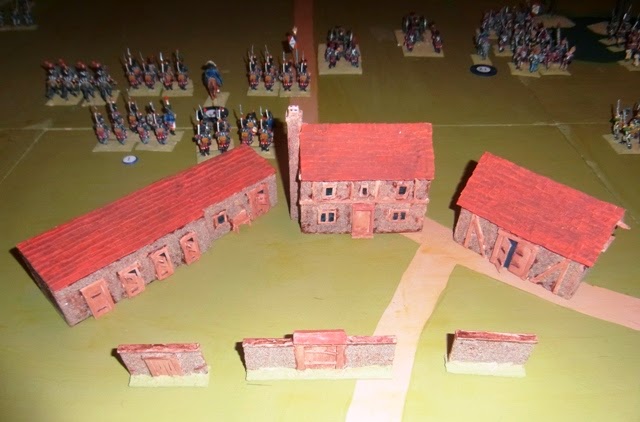 The buildings and walls are designed to be used together.
However as they are free standing the farm house could be used as part of a town

That is the last of the French or German type buildings for the present
Our next project is some Spanish town houses
Posted by thistlebarrow at 20:56 1 comment:

Wagaming with the Spanish Army 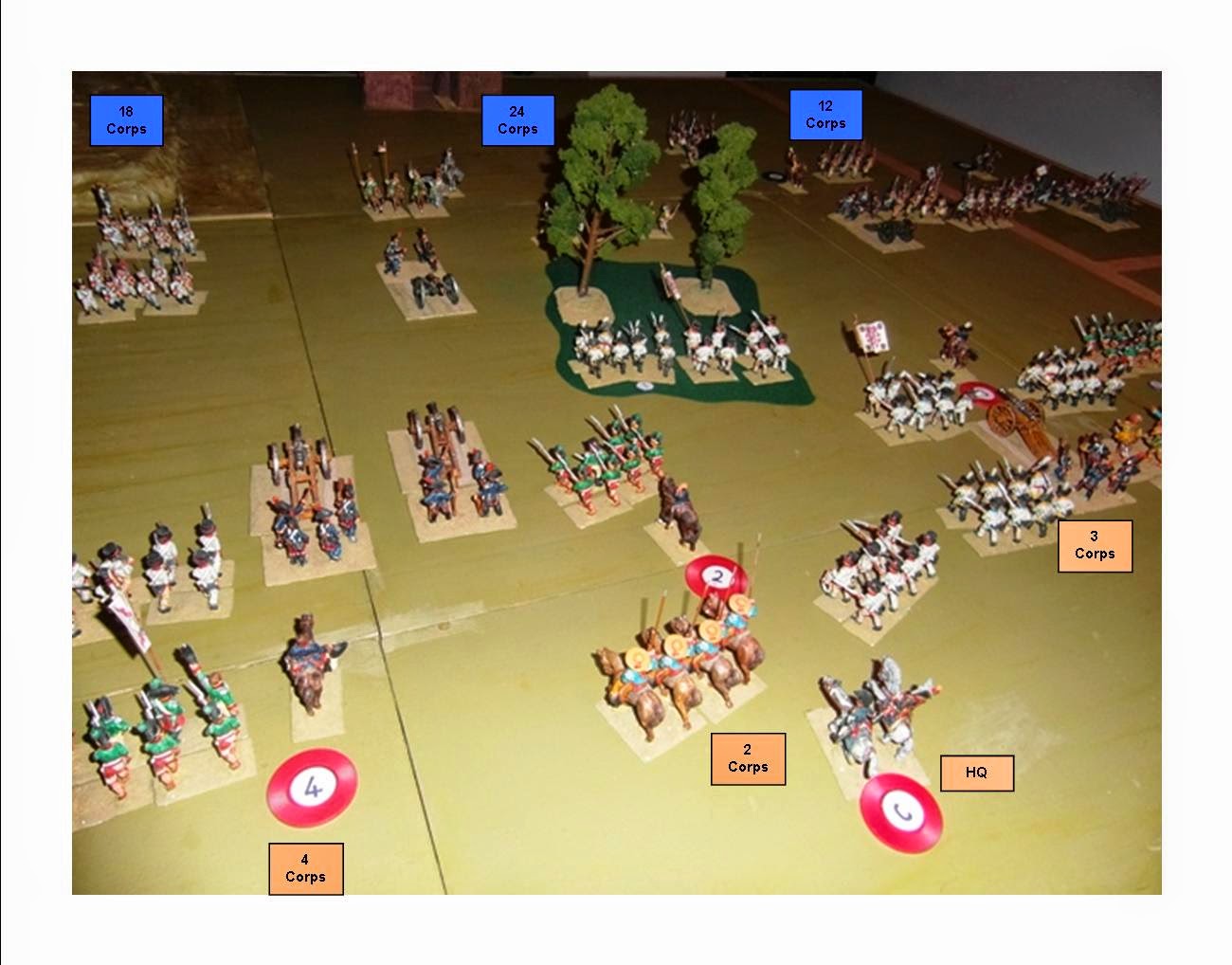 Last week’s blog about using my French Imperial Guard was inspired by the wargame we had fought that week.   It was one of my PBEM 1814 campaign battles and involved the French Old Guard corps and 1st Prussian corps.

This week’s battle, also from the campaign, featured the Spanish and 6th French Armies.

Very much from one extreme to the other!

If the French Imperial Guard is the most popular formation for Napoleonic wargamers, then I suspect that the Spanish would be one of the least popular.   They have lovely uniforms, and provide a very colourful display on the wargames table.   But everyone knows that they lost every major battle they took part in, with the exception of Baylen.

I can easily remember buying my first French Imperial Guard figure.   Not so easy with my first Spanish figure.   I suspect it was about 20 years ago.  I am pretty certain that I have replaced them all once, from Minifigs to Front Rank.

I do know that they have spent most of their life sitting on the shelves in the wargames room waiting for a battle.

That all changed when I started my current campaign five years ago.    The campaign was designed to use ALL of my Napoleonic armies, hopefully in sequence.   So they have started to make a regular appearance on the wargames table.   But I have not really solved the problem of writing rules to suit them.

In my campaign every nation has strengths and weakness, except for the Spanish.   I have to confess that it is difficult to justify giving them any particular strength over the French.   I grade each army on its generals, its morale, its skirmish ability and its volley fire ability.   It would be hard to convince anyone that the regular Spanish army of the Napoleonic Wars were better than the French Peninsular Army of the same period.

For the first four years of my campaign I fought a different area, and a different allied army, as a mini campaign.   Eastern Spain, and the Spanish, were used twice and produced only nine battles.   If my memory serves me well the Spanish lost most of those.

Last year I changed the campaign system to include all six campaign areas at the same time.   This resulted in six battles.   The Spanish won three of them.

This change was because I gave them one British corps in their order of battle.   This is acceptable because a British formation did fight in eastern Spain in 1813-14.   They also had three guerrilla bands, who provided intelligence and posed a threat to the French lines of communications.

Strange to relate, both Jan and I like commanding the Spanish on the wargames table.

She likes them because she feels there are no great expectations.  If she loses it is just what most would expect.   If she wins it is quite an achievement.

I like them because they always provide a challenge.   Great care must be taken to avoid artillery casualties in the early stages of the battle.   Just one casualty can cause the brigade to rout, and that can easily spread to nearby brigades.

I am very happy with the way things have developed for my poor Spanish Army.

I am also relieved that the long suffering Spanish commander in the campaign at last has some reason to celebrate.    Three out of six is not great.   But I suspect it considerably better than most wargamers achieve using commercial wargame rules.
Posted by thistlebarrow at 11:49 2 comments: 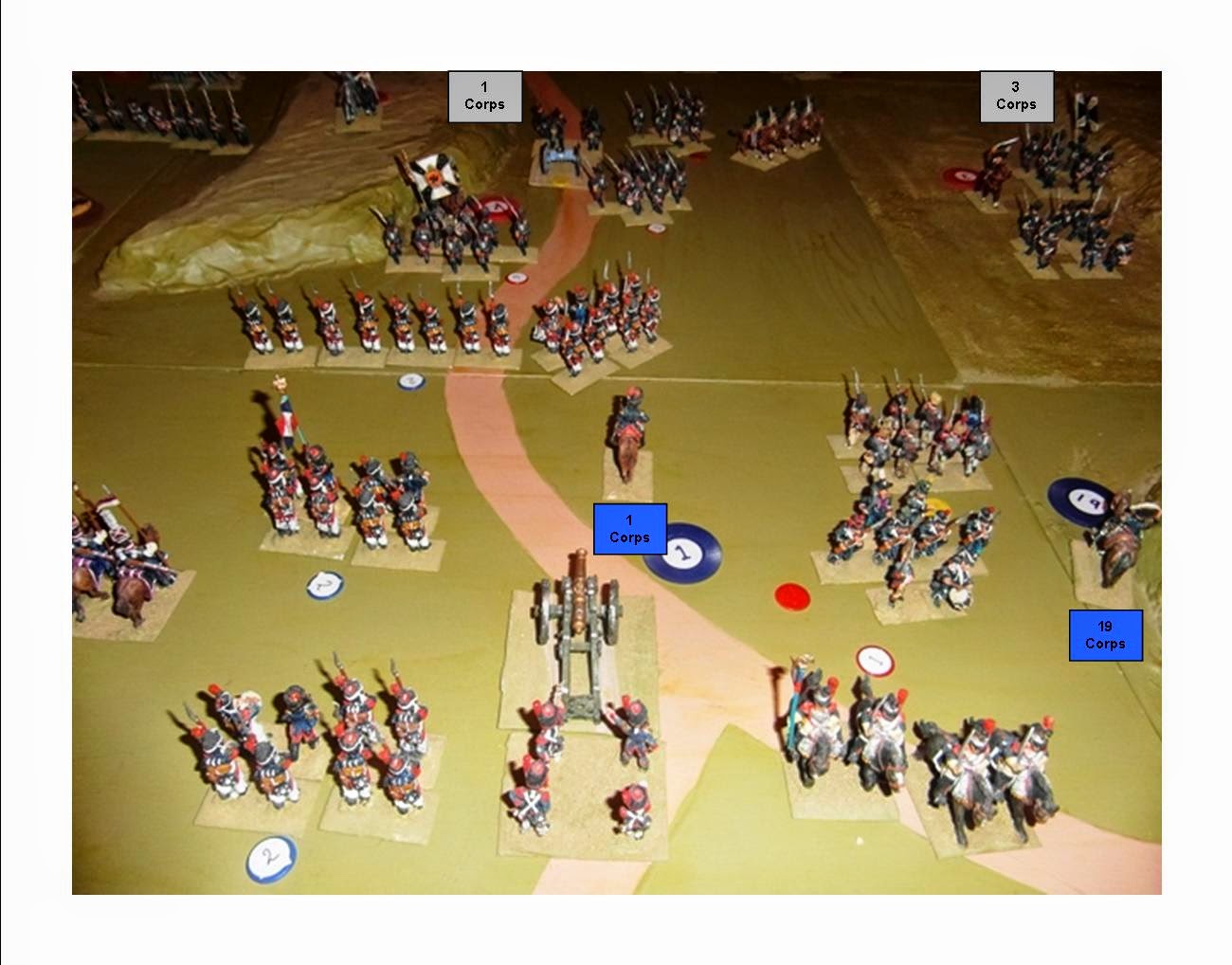 Posted by thistlebarrow at 20:45 2 comments: 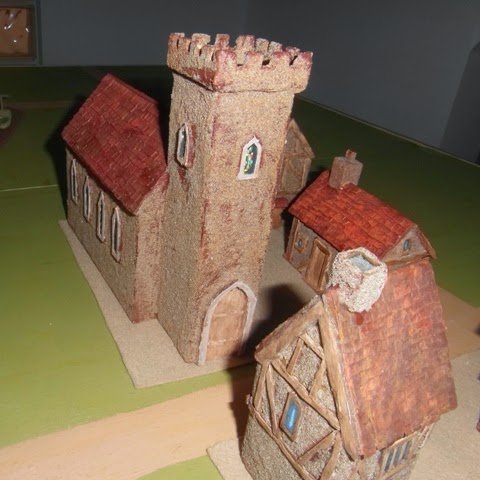 This is the third church we have made, and the first we have been quite pleased with.   It looks similar to the previous one, but the dimensions are different. 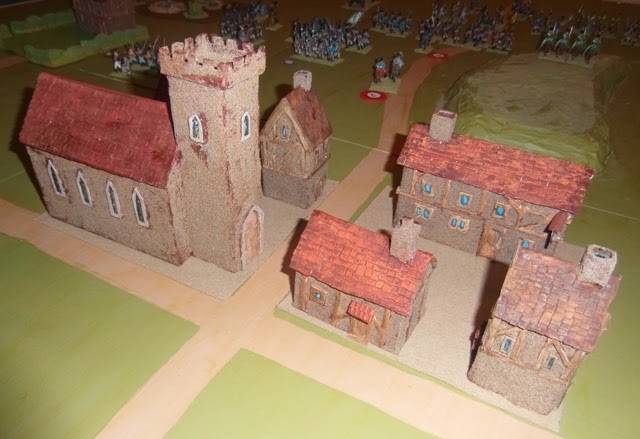 This is what one of our towns now look like.   With commercial buildings we could only get one, or at most, two buildings on one of our scenery squares.   Now we can manage a nice collection of different sizes and types, but all compatable.

Next project is a second farm complex for France or Germany.

Then we will make a start on Spanish buildings.
Posted by thistlebarrow at 18:35 No comments: