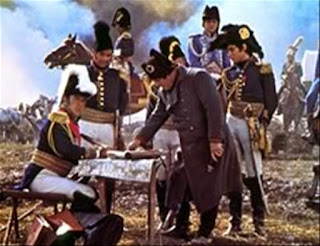 This is something that everyone says is important, and should play a major role in a campaign.   But it is also something which I have found most campaign commanders get easily bored with.

When I ran my first PBEM campaign I included a simple system, which I ran.   In effect it meant that each corps had to halt  for a full day after four days moving.   Even such a simple system resulted in complaints from more than one player, who felt that as an army commander they should not have to concern themselves with supply, as that was the quartermasters problem.

Despite this I gradually developed the supply system.  I felt that it was right that the player who planned his supply system should benefit over the one who just ignored it.

The player contolled the collection and issue of supply.   He received one days supply for one corps for each supply depot he established.   To do so he had to detach a full strength infantry brigade.  So to replenish the supplies he used, a CinC would have to establish four depots (one per corps) and detach 25% of his infantry strength.  Of course he could recall those brigades to the corps to fight, but he would then lose his depot.

He would also have to include which corps could draw how many days supply from which depot in his daily orders.  It really surprised me how often a player forgot, or just didn’t bother, to resupply when it was possible.   This is pretty typical of the approach of many of the campaign players.

The problem with this system, as pointed out by an irate player, is that it rewarded the player who ignored supply.   More than one player just ordered everyone to attack everything.   If he also neglected to establish supply depots he would have a numerical advantage in the fighting.   If he won the first battle, this advantage would increase until he ran out of supplies and ground to a halt.  However by then his opponent would probably have lost the campaign.

The basic problem is that each player had too much supply at the start of the campaign, and the penalties of running out of supply were not damaging enough.

Each commander started the campaign with four days with each corps and a further four days per corps in the depot.   If he ran out of supply he lost 400 men per day until he resupplied.

A campaign phase usually lasts about 10 to 15 days.   If you start with 8 days supplies, and attack aggressively, you have a good chance of destroying the other player who has detached one quarter of his infantry to establish supply depots.

So I have changed the campaign rules.

Each player starts the campaign with six days supplies

When a corps runs out of supplies it can not attack, and does not receive battle replacements

It continues to lose 400 casualties per day until resupplied

The system will still be simple, and easy to administer.   But the effect on the commander who ignores resupply will be pretty drastic.

I am pretty sure that some players will ignore supply and attack, attack, attack.   But they will now run out of supplies after six days instead of eight days.

I have found that results are often much different than expectations.   So it will be interesting to see how these new supply rules play out.

Posted by thistlebarrow at 20:26 No comments:

The objective of my campaign is to allow me to use all of my model soldiers and scenery on the wargames table on a regular basis.

To do so I have had to develop wargame rules for such "difficult" nations as the Spanish.   I have done so by giving all nationalities plus and minus points.   All corps are the same size, and all cavalry and artillery similar in performance.   However infantry brigades have different morale, skirmish or volley ability.

Most important is that luck, in the form of a dice throw, plays an important part in the game.   So it is possible for a Spanish line infantry brigade to defeat a French one.   Possible, but they will require better luck with the dice than the French.

My wargames rules are designed for brigades to be the lowest formation.  This caused problems when I decided to introduce Spanish guerrilla warfare in the PBEM campaign.   I felt it was necessary, because it played such a large part in the historical campaign.

We have used them for a year or so, but they do not “feel” right.

Apart from the Spanish regular army there are nine militia brigades, one in each city and town.   They are not allowed to move outside the town, and require a regular brigade to establish and run a supply depot.   When the French occupy a city or town the militia brigade becomes a guerrilla band.   They move to the nearest village and harrass the French.

So far so good.  But the actual use of them has been very confused and either too effective, or not effective enough.

I have always considered that their role should be three fold

I have rules for all three, but they are too generous to the guerrilla.  They can attack at will, and run very little risk to themselves.

So I have decided to amend the campaign rules.

First their ability to roam will be restricted.   They will have to be based in a village or farm.   Their maximum supplies will be three days.   So they can move one day.   Observe, ambush or attack for one day.   They must then return to their base the third day and resupply and recruit the next day.

So they will only be able to perform one operation every four days.

A dice throw will decide the outcome of any ambush or attack.   They will require 5 or 6 to capture a messenger or inflict damage on a garrison.   2 or 3 they fail and must retreat.   1 or 2 they suffer casualties and rout.

So a one in three possibility of success.   But also similar odds to lose casualties and rout.

If they capture a messenger they will receive a copy of the French orders (to all corps) for that day.

If they attack a garrison the French will not be able to gather supplies whatever the outcome.

I am hoping that the new, simplified rules will encourage the British and Spanish commanders to make better use of their guerrilla.

Posted by thistlebarrow at 10:55 No comments: 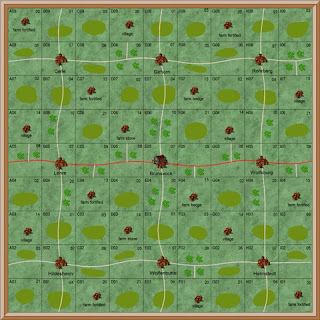 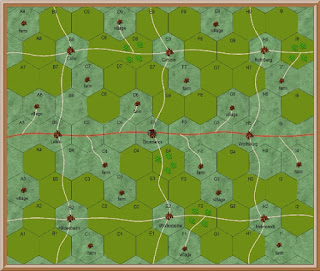 Posted by thistlebarrow at 18:51 No comments: 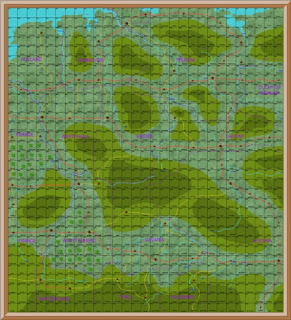 My latest project is to replace the campaign maps.

I designed the original maps to make them practical for transferring from the campaign to the wargames table.

There are different types of maps.    The largest cover all of Europe.   Plus one for France, Germany and Spain.  On these maps each square covers an area of 15 square miles.  This is one days march; it is also one wargames table.

The maps are so large that it is difficult to read them, without using the zoom option on the computer.   On the blog it is quite difficult to make out cities and towns, even with the zoom.

In addition they are not very pretty.   I am not very artistic, as my maps clearly demonstrate.   And because they were designed to be so functional they are even less attractive than they might be. 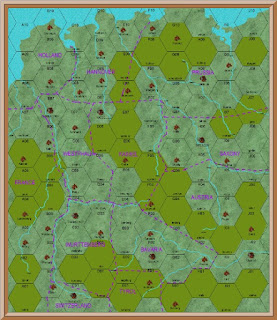 So I have redesigned them to show much less detail.   For my own information I will still use the old maps.  But this type of map will be sent to each commander, and used on the campaign diary blog.

On this map each square covers an area of 45 square miles.   So each one will be a whole campaign phase that is nine wargame tables.

All of the maps used by the campaign commanders will be in this style.  I will make duplicates of each map to show the exact table terrain, but they will not be sent to the players.

I have made two of these maps, one with major roads and this one without.   I am not sure which to use for the campaign.   The major roads show best route between cities, and would follow the traditional campaign areas.

There is still a lot of work to do.   I have made one tactical map using this style, and I quite like it.  But I am not sure whether to introduce them during the current campaign, or to wait for the end of a phase and introduce them for the next phase.   That makes more sense, but it would mean that I will be dealing with both types of maps until all five campaign areas have completed a phase.

Posted by thistlebarrow at 20:32 2 comments: