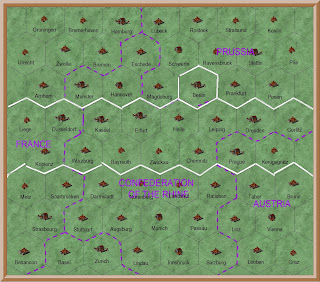 All Germany
The three campaign regions of Germany are indicated by the white lines.   Each hex is a campaign area.   There are 22 in north Germany, 15 in central Germany and 23 in south Germany.   Each hex has the name of the major town and also whether it is walled or not.   This map was copied from the road atlas, so I did not control the number of campaign objectives there would be in each region.   Had I done so I would have made them the same.   Since the start of my campaign the three allied main base has been Berlin, Dresden and Vienna, and they remain so.

Central Germany
These regional maps are not to scale, nor are the cities or towns central.   They are designed to look more natural, and for use on the campaign diary blog.   They will be used to indicate the location of previous campaigns and battles.

Southern Germany
The north and south maps are slightly larger than the central region.  This is because there are eight lines of hex on the map of Germany.   Because of the terrain it is unlikely that either the most northern or the most southern campaign objectives will be used in the campaign.
Posted by thistlebarrow at 12:06 No comments: