Summary of the Campaign in Southern Germany

At the end of each campaign phase I post a summary of the whole campaign in that area.   The aim of this summary is to provide a brief history of the campaign in each area.  There are six campaign areas, and it can take up to a year between phases.  The summary is a quick update which is useful when I start work on the next phase in that area.  It also gives visitors a brief history of what has happened in each of the campaign areas.

The 1813 campaign started in April 2009 as a solo campaign.   Since then it has been reorganised four times.   This was done because of a major change, such as becoming a PBEM campaign in October 2009.   And again when it reverted to a solo campaign in February 2015.

Since 2009 there have been 32 campaign phases, spread over the six campaign areas.  Surprisingly the allies won 16 and the French also 16.   However in Southern Germany the Austrians won all of the seven phases fought there.

There have been 30 battles fought in Southern Germany.   The Bavarians won 11 and the Austrians 19.

Schwartzenberg won almost two to one battles, but this does not explain why he then won all seven campaigns.

I don’t have an answer for this.  Once it became apparent that the Austrians were doing much better than any other allied army I have paid more attention to each campaign phase.   In Rosenheim I was quite pleased in the early stages that Oudinot was doing so well.  I thought that the Austrian run was coming to an end.   But they managed to reverse the trend and once more won. 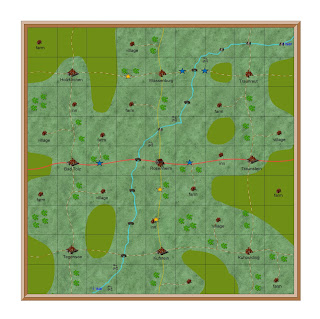 Posted by thistlebarrow at 12:14 4 comments: