Transfer from campaign to table 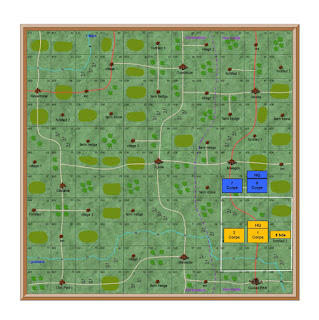 Tactical map showing battle of Cuidad Real
I have only taken part in two online campaigns as a player, and in both the campaign ended when the first battle was declared and the umpire found it impossible to transfer the battle to the wargame table.  In one case the campaign map did not show sufficient detail, in the second he could not gather sufficient figures or a large enough table to wargame the battle.  I have fought 252 battles as wargames and never experienced any problem.

When a battle is declared I outline the battle area on the map showing the position of each corps involved at the end of the previous day.   In this example 7th and 8th French corps have orders to attack.   1st and 2nd Spanish corps, plus 6 militia brigade, have orders to hold the road approaching Cuidad Real.   Normally the point of impact would be the centre of the battle area.  But in this case the French have to force the Spanish to retreat over the river Guadiana to win the battle.   Such a retreat would be very difficult whilst under attack.  So the map has been moved down one square to include the river. 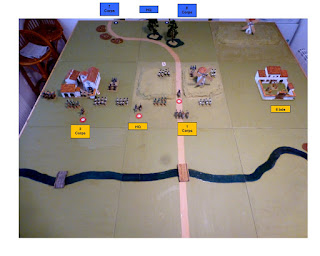 Wargames table at start of battle of Cuidad Real

The wargames table has been set up using the nine squares shown in the area outlined in white on the tactical map.   1st and 2nd Spanish corps, plus 6 militia brigade, are shown in the same squares as on the map.   7th and 8th French corps are just outside the top of the table.  They will arrive on the table at the start of move one.

When the wargame is finished the battle casualties are transferred to the campaign orders of battle.   If one side has been forced to retreat that will be shown in their campaign orders for the next day.   If the battle is a draw both commanders will write their orders for the next day.   If neither withdraw a second day of battle will fought as a second wargame.

Although this type of map is not very pretty, it is extremely useful in the campaign.   Initial deployment and time and place of arrival of any reinforcements can be calculated with each.   Once the wargame is complete transfer back to the map is equally easy.

Movement on the map and the table is the same.   A corps can move three map squares a day.  It takes 4 hours per square or 12 hours a day.   A wargame lasts a maximum of 12 moves.   So 1 wargame move equals 1 campaign hour.

One 28mm corps fits comfortably on one scenic square.   On the campaign map only one corps is allowed in each square.   An army of four corps deployed on the campaign map would be three corps wide with one in reserve.   On the wargames table three corps would fit comfortably across the three squares.  The fourth corps would be in the square behind.

It is only when the campaign is transferred to the wargames table that you get a full appreciation of how the whole Comprehensive Wargames System works.

Posted by thistlebarrow at 10:01 No comments: 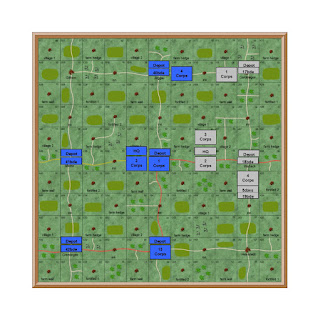 Note that the winning French need five depots and the losing Prussians only two.   The red road is the main supply route for both armies.

You cannot really have a campaign without a campaign supply system.  However most of us are more interested in playing with our model soldiers on the table than spending hours working on complicated supply and movement rules.

I wanted supply to play a major role in the campaign, particularly when it was a PBEM campaign.   But I also wanted the administration of each daily move to be simple and fast.   Having considered the problem I decided that I wanted the supply system to effect the campaign in four ways.

First each corps would only be able to carry limited supplies, and I settled on four days.

Third each depot would collect one day’s supplies from the surrounding area, providing that they were not under attack.

Fourth if they ran out of supplies they would suffer attrition casualties and would not be able to initiate a battle.

The result of these four simple rules is that the winning army would have to detach brigades to garrison his depot supply chain as he advanced.  This would reduce his battle effectiveness just as heavier casualties would affect his opponent.

With a maximum of four days supplies he would have to plan carefully to advance to contact and fight a battle before he ran out of supply.   Normally at the end of a battle he would be out of supply, and might well be unable to resupply because he was more than one days march from his nearest depot.

However if he captured a town which was an enemy depot with supplies, he would immediately increase his own supplies.  This gave an added bonus to wining such a battle.

As the campaign progressed I amended the original supply rules to allow movement of supplies between depots.   CinC (not corps commander) were allowed to move up to four days supplies each day.

Each army would always have 20 days’ supply.   If there were not sufficient between what was carried by each corps and held in each depot, the balance would be delivered to the main supply depot each day.  The main supply depot is always a town on their edge of the campaign map.   So as they advance it gets further behind them.

That concludes the campaign rules.  Next time I will explain transfer from the campaign to the table and back again.

Posted by thistlebarrow at 11:31 No comments: