Fighting in Built Up Areas 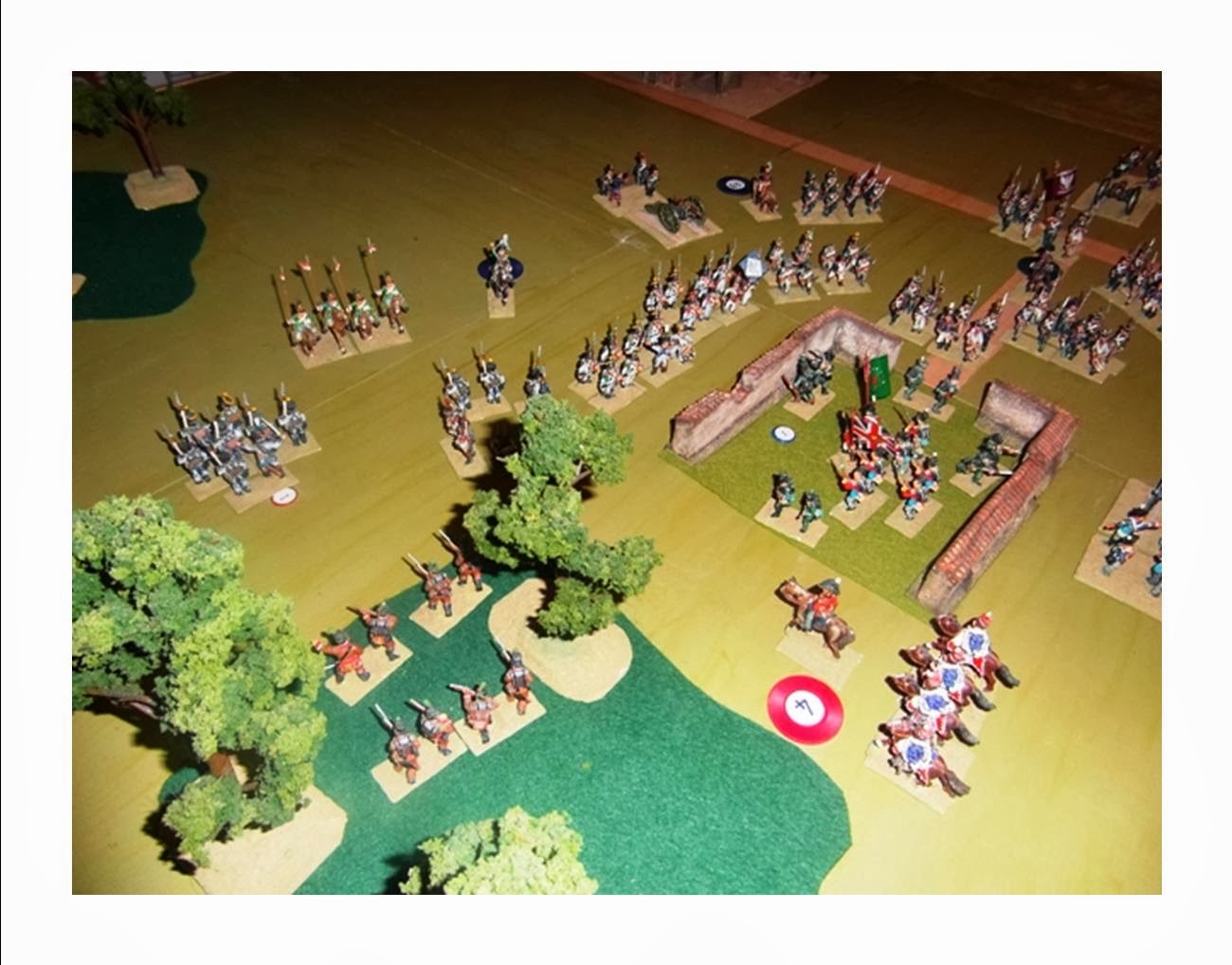 Our house rules work quite well for this type of combat, particularly if it is one brigade to one brigade.   But we have always had a problem with more than one brigade attacking at the same time.

We had different rules for fighting at the edge, or inside.   Inside is always one brigade on one brigade.  So no problems.   But at the edge there can be multiple brigades attacking a single defending brigade.

Skirmish is no problem.   The defenders can fire once, and dice for which brigade suffers casualties by rolling a dice.   The attackers can fire once per brigade within 4”.    Each brigade rolls 1D6, and needs a 6 or more to hit.

Hand to hand is the problem.   We want to give the defenders a good chance of holding for a long time, such as at Hougoumont at Waterloo or the Granary at Essling.   But we also want to give the attackers a chance to win.

We have tried various options, but found them all wanting.   This week I think we found the answer.

In hand to hand combat it is the morale, or class, that counts.

The interesting part comes next.   Having calculated the plus and minus the higher rolls 2D6.

So the player attacking a build up area has to decide whether to go for the low risk choice of skirmishing, or the high risk hand to hand fighting.

We particularly like the risk of the stronger side risking a defeat due to poor dice.   But now that each brigade is a single combat, even if unlucky the attacker will only lose one brigade at a time.
Posted by thistlebarrow at 12:54 No comments:

Town buildings for France or Germany

The PBEM campaign has taken up most of my time since Christmas, but we have made a little progress with our building project.

Our scenery, like our wargame rules, are simple and functional.   They are not based on the model railway principle, but rather on the wargame principle.

I bought some felt to outline the terrain, whether woods, broken ground or built up areas.  One square represents a farm (green felt) or village (grey felt).   Two squares a town.   Four squares a city.

I am now working on the buildings for towns, villages and farms.  There will be one set for France and another for Spain.   The buildings and walls will be designed to fill the felt square, either for open towns or walled ones.   Each farm will be a set with farmhouse, outbuildings and walls.

So far we have been working on the town buildings for France or Germany.    We have completed eight, which is just right for two town sections.   Next we will make some buildings suitable for villages. 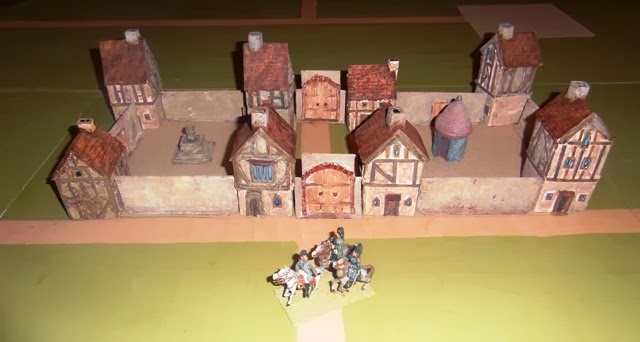 Walled town for France or Germany

We have also made some wall sections for walled towns.   We don’t use them much at present, but may introduce them now that I have the walls.   The same buildings are used, and the wall and gate sections have been designed to fit around the felt square, with one building in each corner.

Posted by thistlebarrow at 15:36 No comments: 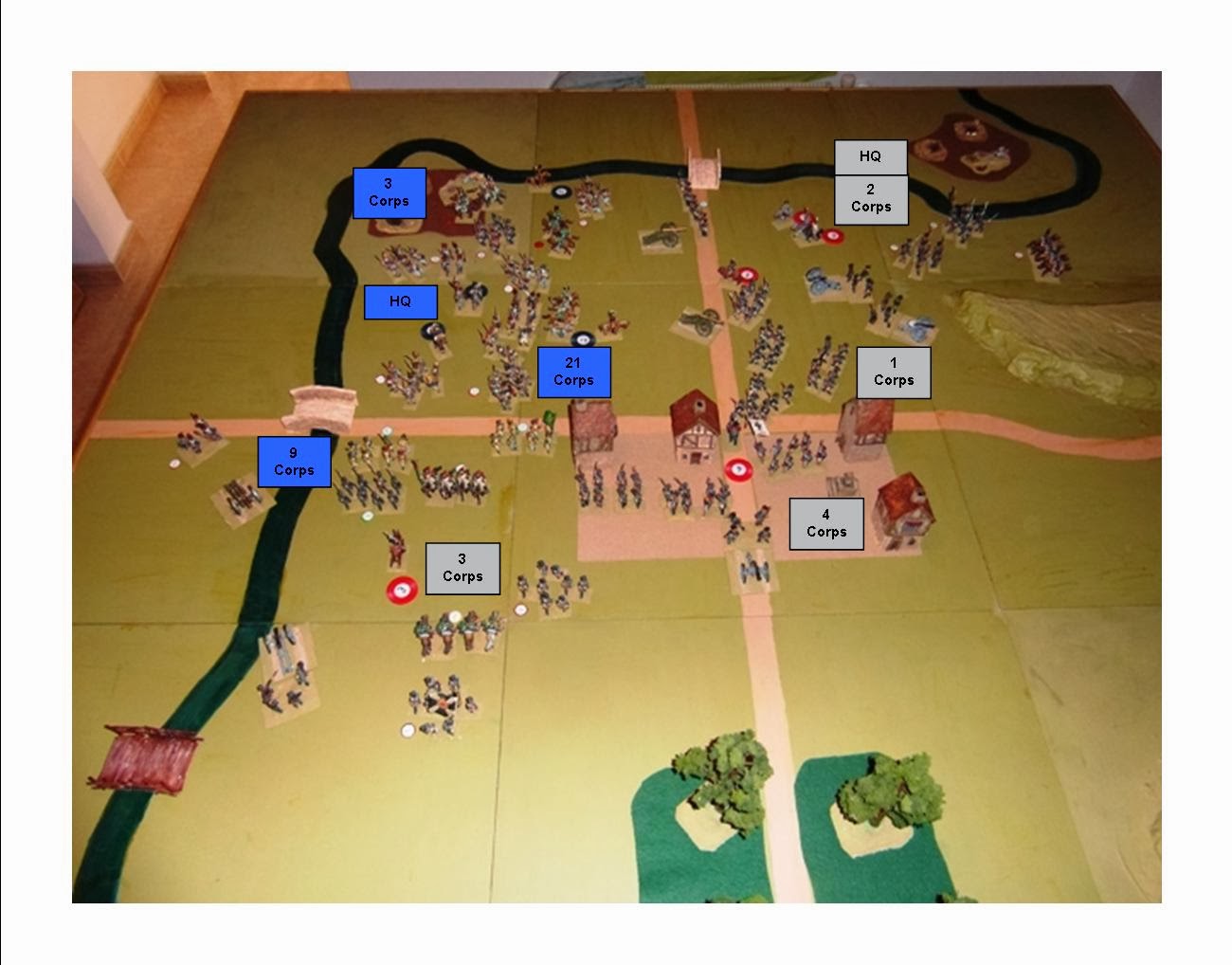 Posted by thistlebarrow at 12:53 2 comments: 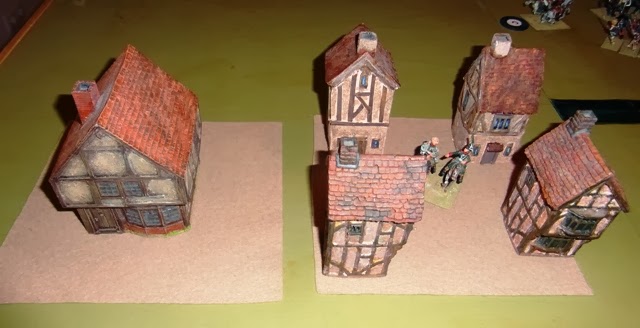 Our latest project is to scratch build a collection of town houses and farm buildings designed to fit our campaign based wargames.

For many years we have had a large collection of 28mm commercial buildings, many of them Hovels.   Their “footprint” is much too large, but that did not worry us when we were fighting one off battles.   The towns could be as large or small as suited a particular wargame.

Now that all of our wargames are produced by the campaign it is different.   We have to be able to provide cities, large towns, small towns and a selection of villages and farms.   To do so we use felt squares 8”8”.   One is a village, two a small town, three a large town and four a city.   They are designed to be practical and wargame friendly.   When fighting takes place in the town one or more buildings are removed to make space for the figures.   The felt square remains to show the outline of the town.

The problem is that most of our commercial buildings take up too much space.   One building looks ok, but two or more look very crowded.

The Hovels buildings, which I think are 28mm but might be 15mm, are much smaller.   I can fit three or even four on a base without looking too crowded.

Neither of us are very good at scratch building, but about ten years ago we gave it a try.   We made a walled town to match the Hovels buildings.   Each buildings and section of wall could be used on its own.

Lately we have used some of those town houses together with the Hovels ones.   Ours are slightly larger, but still look ok as part of a town.   In the photo above the large building on the left indicates the problem of size.   The two at the front on the right are Hovels, the two behind are two of our ten year old card buildings.

The plan is to make a selection of town buildings to use with the Hovels.   If this works well, we will then produce a couple of farms, both farm house and outbuildings.   We will concentrate on northern European first, and then have a look at Spanish.

I will post occasional updates on the blog.
Posted by thistlebarrow at 12:13 3 comments: