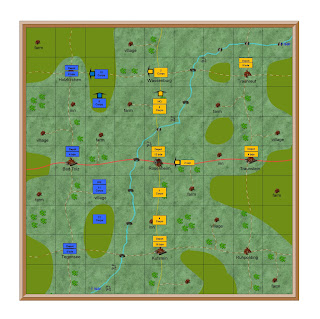 The retreat of 10th Bavarian corps from Wassenburg has given Schwartzenberg an opportunity to cross the river Isar in the north.

He orders 3rd corps to join 2nd corps at Wasseburg, and rides north to take command.

Oudinot has ordered 10th corps to continue their retreat towards Holzkirchen.   He now orders 9th corps north to join them.

Schwartzenberg has decided to attack

Crossing a defended river is always difficult, even with so many bridges.
It is particularly so now, with all four corps weakened by battle casualties.

The first priority was to reorganise and resupply damaged corps, and that has now been completed.

The withdrawal of the isolated 10th Bavarian corps has given the Austrians an opportunity to cross the northern part of the river.

I will have to compare the remaining battle casualties of all four corps, and the brigades absent on garrison duty, to decide whether the Austrians are strong enough to attack..

It is not just total casualties that matter.   If one side has more artillery and cavalry casualties than the other, they will usually adopt a defensive position.   It is very difficult to attack without an advantage in cavalry or artillery.

I am pleased with the way the campaign is turning out, because we now have two corps in the north and two in the south.  This was not planned, but will almost certainly result in two smaller battles rather than one big one.   And quite possibly a third medium sized battle with the survivors of those two battles.

The Austrian position is completely reversed following their victory at Rosenheim.

Posted by thistlebarrow at 12:32 No comments: 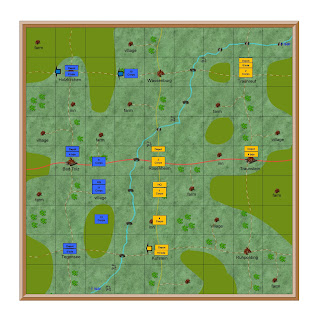 Campaign Map on 11 October 1813
Both armies regroup and resupply.

In the north 10th Bavarian corps are on a limb at Wassenburg, and open to a joint attack from the east and south.   Oudinot orders them to retreat towards Holzkirchen, and to move the depot there from Wassenburg.

The Austrians are concentrating on reorganising their supply system in and around Rosenheim, and fail to take advantage of the retreat from Wassenburg.

Campaign Notes
Losing a major battle like Rosenheim can leave an army in a desperate state, quite unable to carry out further operations.   Casualties are usually spread throughout all of the brigades, and one or more may be in rout.   To sort this out the corps concerned must break contact with the enemy and find a safe spot to regroup or reorganise.

To do so they must be out of contact with the enemy, not move during the current day and be in supply.   If they meet all of these requirements they can regroup.

This means that all routed or shaken brigades can rally

Infantry casualties can be concentrated in one brigade, less 400 in each brigade affected.   This is usually the brigade with the most casualties.  However if more than one has the same number the corps commander can choose which one to use.  This avoids putting all casualties in the lowest quality brigade.  Quite often the most casualties are on the best brigade, because they have borne the brunt of the fighting.   Having all the other casualties, including from conscript brigades, moved to them can result in the loss of the best brigade for the rest of the campaign.

Battle casualties are replaced.   Each corps receives either 400 infantry or 100 cavalry or artillery each day.  That is 10% of the brigade full strength.   Artillery are replaced first, then cavalry and then infantry.   As always each brigade must retain 10% of their casualties for the remainder of the campaign.

At the end of the battle the losing side must retreat at least two squares.  This is to establish the one map square gap there must be between corps not fighting.   The winner usually moves forward to occupy the town or terrain objective which was the objective of the battle.   This means that both sides move, and neither can resupply or regroup.

The next move both usually remain on the defence.   They then resupply (if within range of their depots).    They also rally routed brigades and concentrate their infantry casualties in one brigade.   Finally they receive battle casualty replacements

The next day is the important one.   If a corps has suffered a lot of casualties, particularly artillery or cavalry, they may need to remain where they are and wait for further battle casualty replacements.   But if their opponent have suffered less casualties they may opt to attack whilst they still have the advantage.

This is a very simple device which requires very little administration.   Each army has a page with all brigades listed and showing their current supply and casualty status.   As supplies are received, and casualties replaced, the totals are adjusted.

But the effect on the campaign, and on future wargames, can be very significant.

Posted by thistlebarrow at 18:25 No comments: 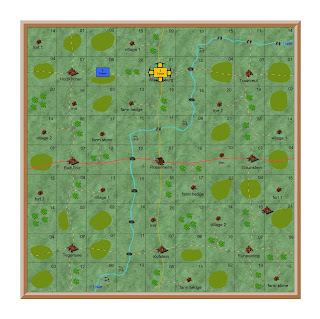 I was asked about possible movement options to result in a combat, which I found quite difficult to explain.  So I thought it might make for an interesting blog post.

Movement must be north, south, east or west.

A corps can only move into a square adjacent to the enemy to fight a combat.

The above map shows the movement options open to 2nd Austrian corps.   If they enter square 20 they must fight 9th Bavarian corps, unless the Bavarians retreat to avoid combat. 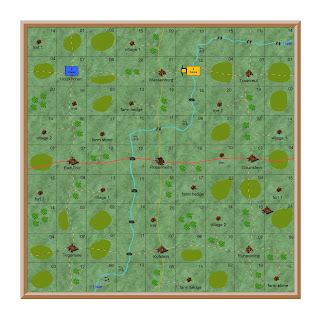 In this map 2nd Austrian corps has been ordered to advance and engage any enemy they encounter.   They can only “see” an enemy up to two squares away, in this case square 20.   9th Bavarian corps is too far away to “see”.

2nd corps are allowed to move a maximum of three squares on a road.  So they could move squares 07-20-06.   However they can only enter 06 to fight with the enemy.

A corps can move a maximum of 12 hours each day, and it takes four hours to move through one square.   So they would arrive at the junction of squares 06-07 at the end of the 12 hour day.   They would not have time to engage in combat.  Consequently  they would have to halt in square 20.

The next day they could attack Holzkirchen, providing 9th Bavarian corps did not retreat.  If they enemy did retreat they could occupy Holzkirchen.   If the enemy halted in square 04 they would still have four hours to attack them.

The concept is easier to operate than to explain, but I hope I have made it a little clearer how moving to contact works with our campaign rules?