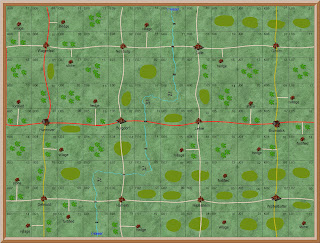 Posted by thistlebarrow at 20:23 No comments: 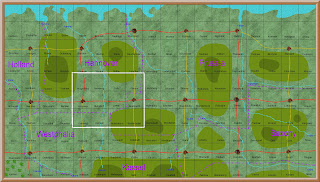 The first solo campaign will be based in northern Germany.   The white area is the strategic area for the first campaign.   Each square is a wargames table.

I have chosen this area because I have not used the Prussian and First French armies for some time.  They were the first to bow out of the PBEM campaign.    First French Army is commanded by Napoleon and includes the Imperial Guard.   This will be the first time that I have commanded them in a campaign.

I am using the same campaign maps and orders of battle, but the campaign area will be different.   For the PBEM campaign the phase objective was always a city, and was always in the centre of a 3x3 grid square map.   Both armies always started at opposite ends of the map.  This was to allow maximum freedom to each commander to choose his campaign strategy.

However in the solo campaign the strategic map will be 4x3, with a city at each side of the map.  These cities will be the main French and Allied supply centre.   One side will always be in defence and one will attack.  This is to make it easier to play a solo campaign.   I will command both armies, but the attacker will have the initiative.

I will now work on the first tactical map.   It will be a 12x9 square grid map, and each square will be one of the 2x2 foot squares I use to make up my wargames table.   The table is 6x6 foot, and consists of 9 scenic squares.
Posted by thistlebarrow at 19:57 2 comments: 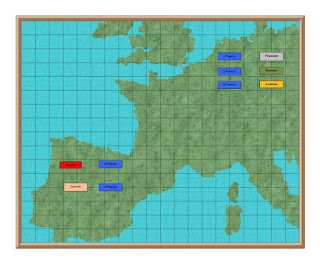 Posted by thistlebarrow at 12:40 No comments: