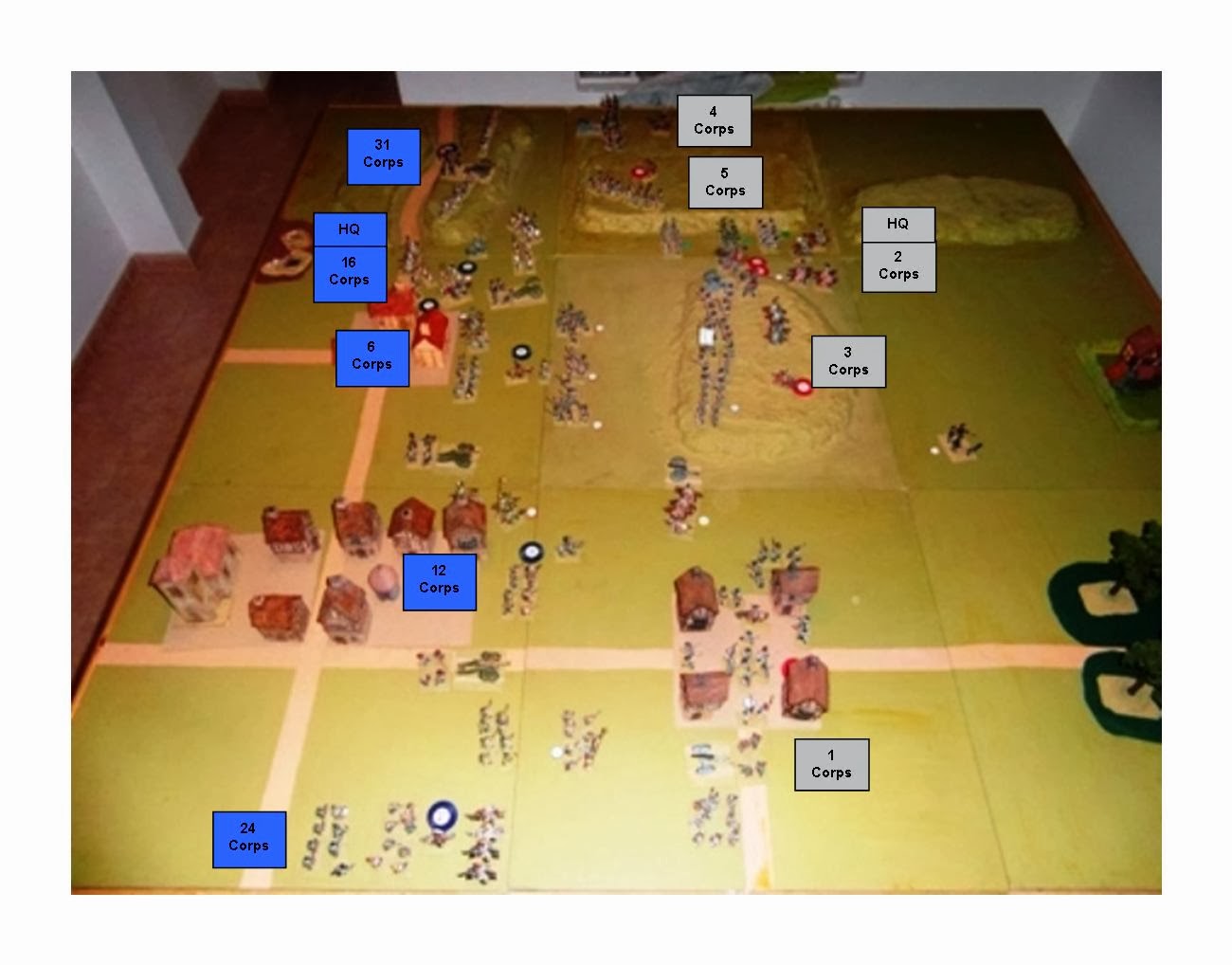 The current campaign includes a lot of fighting in hilly terrain, and in particular this weeks wargame which was the battle of Clerval in eastern France.   One half of the table included a ground of hills, and it was difficult to move in this area without using them.

This highlighted a problem which has been bothering me for some time, and that is how to handle movement and fighting on hills.   Our rules reduce movement by 50%, and artillery can only fire on troops lining the edge of the hill.   This encourages the tactic of grouping large bodies of troops just back from the crest, making them very difficult to attack.

Wellington was famous for positioning his infantry on the reverse slope to shelter them from French artillery.  He would then move them forward at the critical moment and volley fire on the French as they neared the crest.   I have not read any account of any other nation using this tactic, but I can see no reason why they should not.

I did not want to restrict this tactic to Wellington and the British alone.  But I did want to discourage all nations from using it too much.

I allowed artillery to fire on defenders within 4” of the crest.   This is also skirmish range, and it would at least stop them from firing on an approaching column at close range.   But it was not sufficient to discourage the practice.

I raised the subject on TMP.   As always much of the response was of a general nature, without any practical suggestion to discourage it.  But then one suggestion to test morale for defenders who first sight the enemy  at close range, or within 4” in my rules.

In keeping with the rest of the rules, I decided on a simple dice throw to decide the outcome.

Clerval was the first battle to use it.   The whole of 3rd Bavarian corps was deployed on the reverse slope.   6th and 16th French corps attacked the hill.    The four Bavarian infantry brigades tested their morale when the French were first sighted.   Three passed, the fourth was shaken.   Despite this the Bavarians won the firefight.

It seemed to work well,  but we shall play test it for four or five games before changing the wargame rules.
Posted by thistlebarrow at 22:27 1 comment: 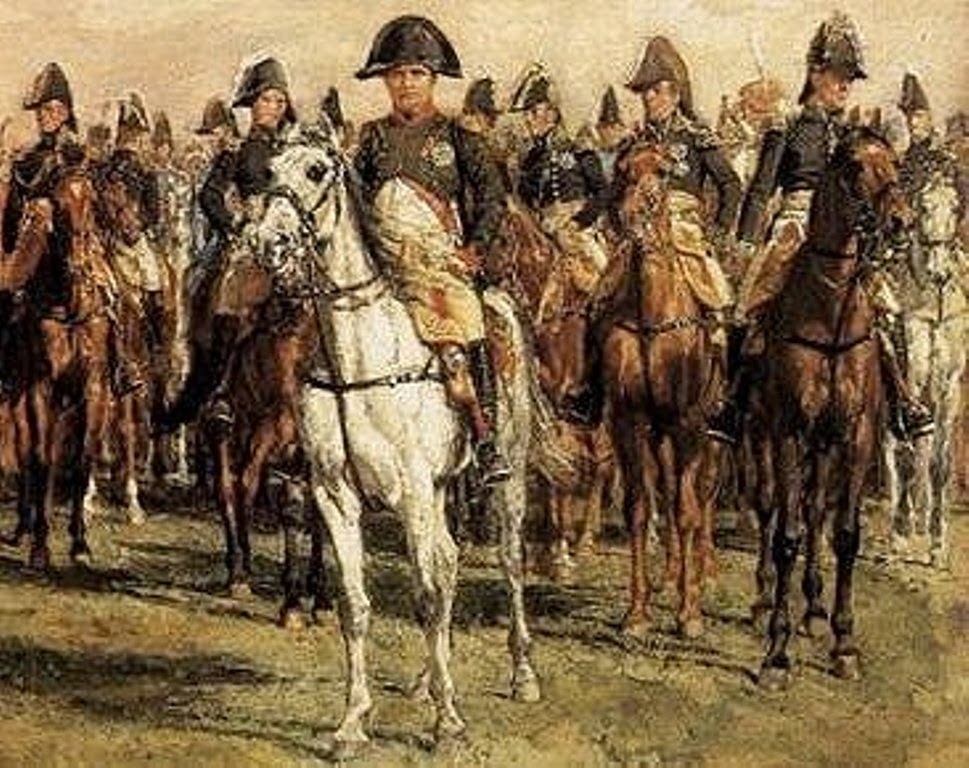 The great thing about the campaign is that one thing always leads to another.

Having decided to introduce the new supply system, in order to reduce the ease of fighting large battles, I now have to sort out the administration to do it.

I had anticipated that I would introduce the new supply system as the end of each campaign phase.   This would spread the workload over a long period, as each of the six campaigns last about three months.

But then I realised how complicated it would be to have different supply rules for different campaign areas, but to have to update all of the campaign areas at the same time.   So I decided to introduce it in all areas on 16th March 1814.

Most players were happy to do so, but almost all wanted to end the current phase and start a new one at the same time that the new supply rules are introduced.   This is perfectly understandable.  The consequences of the new supply system will be to change the whole strategic concept of the campaign.  This would be very difficult to do mid campaign.

But then one player wanted to keep the old system, as he was wanted to take advantage of a recent minor victory.  Again perfectly understandable.

So as well as wargaming the last of the backlog of battles, I have been busy making new maps and updating orders of battle.

When I started the campaign I kept the Imperial Guard in reserve, in case the French were over run and the allies marching on Paris too quickly.  In fact this has not happened, and the Guard have sat on the shelves gathering dust.   So as the same time that the supply rules are changed, I am allocating one Guard corps to each of the four armies in France (none for Spain).

All is just about done.  I have made new maps for five of the six campaign areas.   Three of the six have received their new starter packs, and I am waiting for the players to confirm their initial deployment.

All of this has been achieved despite the fact that my desktop computer developed a hard drive problem.  This resulted in a visit by my “computer man” who confirmed he would have to take it away to sort it out.  This in turn meant that all of the campaign files had to be transferred to my laptop.

All is now looking good.   I should be able to send out the remaining starter packs during the coming week.  By this time next week we should be completely transferred to the new supply system.

But, as I have learned from bitter experience, things rarely go as planned.
Posted by thistlebarrow at 22:58 No comments: 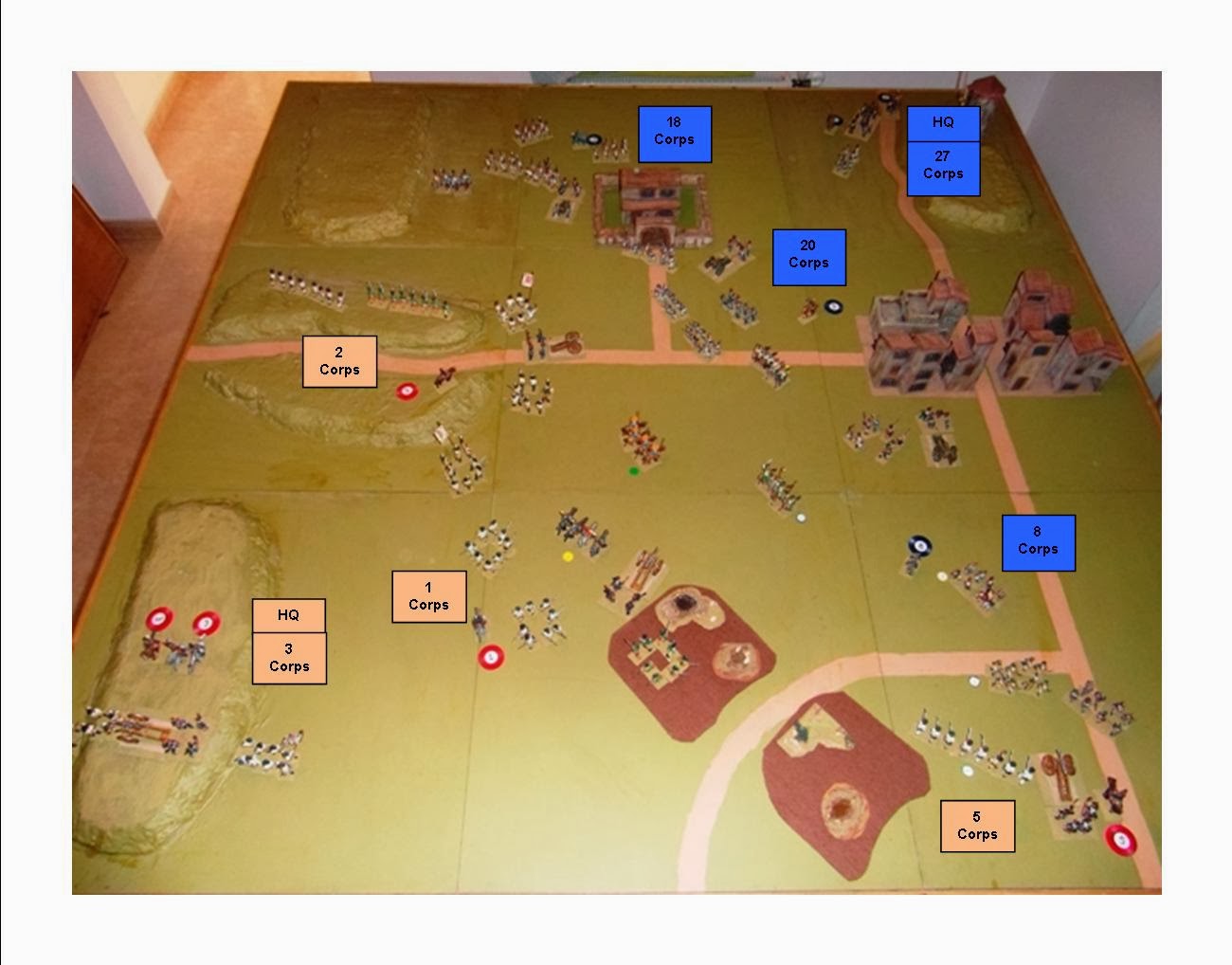 The battle of Figueras

We are now firmly back in wargame mode.

During the week we finished a large Spanish v French wargame.   It was one of three campaign games waiting to be fought.

It was an encounter battle with four of the five corps from each side taking part.   Both commanders had issued orders to attack Figueras (centre right in photo), and both armies arrived piece meal.

The Spanish held their own until during the first six moves, whilst the French arrived and deployed.  But once the French attacked it was all over.  You can read the full battle report on the PBEM campaign diary blog  http://1814campaigndiary.blogspot.com.es/

The result was as expected.   The Spanish fought reasonably well.  It turned out to be an enjoyable wargame.   But it did make me ponder what the Spanish could do now.   Although they had not lost major casualties, they could not hope to fight the fully concentrated French army.

It made me realise that there is a serious flaw in the campaign rules.

Supply is pretty simple in my campaign.   Each side has a main supply depot.   They can establish as many forward supply depots as they require.   Each must have a garrison of one infantry brigade.   Each can supply all five corps.   Each corps must be within 15 miles (three map squares).

The major problem for French commanders in the Peninsula was to keep their armies concentrated.   I recall reading “small armies are defeated, large armies starve”.   This did not apply in my campaign.

I can achieve this quite easily with a simple change in the supply rules.   Each forward depot will only be able to supply one or two corps.   There are five corps in an army, so they will have to disperse to three towns (a distance of 65 miles/13 squares).

They can carry five days supplies, and they can concentrate as long as they have supplies.  This will allow them to concentrate for about three days.   They will then have to move within 15 miles of their respective supply depot to resupply.  During this period they will be open to attack by a concentrated Spanish army.

This solution has the advantage of being easy to understand and for me to manage as umpire.   It will also make the task of each army commander a little more challenging than it is now.

Whether it will work or not – only time will tell 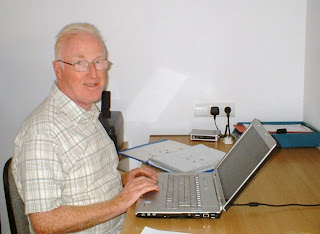 A belated Happy New Year to everyone.

We have just returned from spending Christmas and New Year with our grandchildren (aged 3 and 7) in UK.   I took my laptop with me, expecting to be able to get in some work on the PBEM campaign.   But no chance!   I had some spare time, but I couldn’t concentrate enough to do any work.   And, to be honest, I couldn’t really be bothered.

The campaign now takes up two or three hours work each day, and gets more complicated by the week.   The 1814 campaign started in June 2013, and we have completed just fourteen days.   That does not sound a lot, but there are twelve sets of orders to be processed each campaign day.   We aim to complete one campaign day each week, that is 60 orders (one for each corps commander) from the Army commanders update six campaign areas and produce 60 reports for the Army commanders.

Then there were 26 battles to be fought as wargames.   Each one has a detailed battle report, which includes a detailed background, move by move photographs and description and a summary.   We try to complete one wargame a week have just about managed it.

It’s a lot of work, but it is also a labour of love.   I have not painted a single wargame figure since we moved to Spain in 2006, and the campaign (starting in 1813) has taken up the time I used to spend painting.

When we left for UK in late December the campaign had reached a complicated phase.   One battle resulted in the unexpected total defeat of Lord Wellington.  This requires a new phase of the campaign, which involves a lot of administration.   Maps to prepare, background to write, new orders of battle to produce.

There are six campaign areas.   I still had two battles to fight.   A new phase to prepare.   Three sets of orders to process.   I expected to complete most of the administration whilst in the UK.  In preparation I transferred all of the campaign administration to my laptop.

Christmas with young children is very infectious, and hugely enjoyable.   We are used to a very quiet house in Spain, where I have very few distractions.  Or at least very few unexpected distractions.   It was very different in the UK.

The bottom line is that I got no work done at all.   Worse still,  I got out of the habit and lost my interest in the campaign..   We returned three days ago, and for the first two days I could not seem to get back into the campaign.   Only today have I finally got to grips with it.  It has involved a lot of reading to get my grasp on the campaign back.

I have now set up the next wargame, and completed the administration to the end of 14th March 1814.   All of our model building projects are still untouched.   But it is a good start.   Next week I will process the orders for 15th March and write the corps commander reports.   That will put the ball in the hands of the twelve  campaign commanders.  I wonder how they will meet the challenge of returning to 1814 France?
Posted by thistlebarrow at 12:25 No comments: