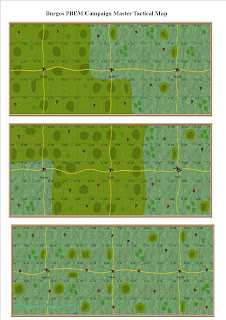 After two months the campaign is still going strong.

We have just completed the seventh campaign day, and the third campaign battle.   Despite three battles in three campaign days, we have managed to keep the momentum of the campaign going, and still to the target of one campaign day each week.

All of this is largely due to the new concept of each player having his own campaign area and objectives.  In fact there are three areas, as shown above, and the six players in the campaign are each fighting one opponent.

Each of the first three battles have taken place in a different campaign area, so all players have experienced one battle each.   It was fortunate that the battles were spaced to take place on consecutive days.  This was nothing to do with me, it was entirely due to player choice.   It allowed Jan and me to fight each of the battles over the period of a week, just sufficient time for us to complete a wargame.   Had there been two on the same campaign day it would have taken us two weeks to fight, and resulted in a delay in the campaign.

As CinC of both the British and the French armies I have had very little work to do.   When one of the corps commanders sends in a report I distribute the information to the other two players.   This gives a small degree of cooperation within the two armies.  But in general there is little support between corps commanders.

It’s unfortunate that the French managed to lose all three battles, as this must result in a general retreat to the east.  I had hoped that the battles might present a problem to adjacent corps commanders.   At the least it should have caused concerns about open flanks.   But with a general retreat this will not arise.

The other new introduction for this phase of the campaign is the use of guerrilla bands.    One in each campaign area.   They have caused problems by cutting supplies and capturing messages.

In summary so far so good.   It is also good to report that all six original players are still in place.   This has been a problem is previous PBEM campaigns, when players have been known to disappear without notice.   I hope this is due to the longer turn around from two to four days to write orders, and perhaps even that it is more enjoyable for the players concerned.

Posted by thistlebarrow at 15:37 No comments:

The Effect of Luck in our Wargame Rules 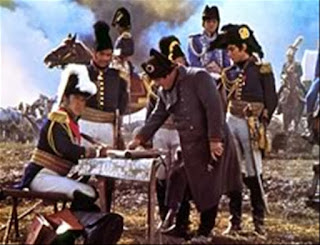 I post a battle report on the PBEM campaign diary blog of each wargame fought.   They are not as detailed as they used to be, because I found that some players found them too complicated.  I now include a photograph of each move and a brief description of what happened during that move.

These reports tend to highlight the important events, often a result of a particularly good or bad dice thrown.   This tends to indicate that the rules rely heavily on luck rather than skill.  And they often result in a comment on the campaign forum to that effect.

This prompted me to review the element of luck in my rules.   This is quite difficult to be objective about, because the result of a good or bad dice is often the part of the wargame that one remembers most.

Those of you who have followed my blog for some time may remember that I wrote about the effect of artillery in one particular game, where a run of extreme dice had given a very unrealistic and quite unacceptable result.   At that time the campaign was solo, so I only had myself and Jan to keep happy.  Now I have to consider the six campaign players.

I designed the rules to provide a fast, and fun, wargame.   We have used them frequently for about six years, and that is considerably longer than any of our previous rules have lasted.

The most important element is command and control, then a reasonable balance between infantry, cavalry and artillery.   Finally a strong element of luck.   They were designed like this because Jan and I always wargame together, so we know pretty well what the other will do in given circumstances.   So an element of luck is important to avoid the games becoming boring and predictable.

In general full strength brigades will always make their morale and do what you want them to do.   Each casualty is important because it reduces their ability to fight and to make their morale.   The absence of a general within command range will also reduce their morale.

However a dice roll of 6 will usually inflict a casualty, or save a morale test.   A dice of 1 will almost always result in the loss of morale.   We both like this element of luck, because it makes a wargame completely unpredictable.   It is not unusual for the advantage to pass from one to the other within the space of just one round out of twelve.

The big disadvantage of this type of rule is when one side has a run of 6s, or 1s.   We normally accept the occasional 6 or 1, but will sometimes roll again if there are a run of either.   On those rare occasions we usually roll two more dice and ignore the highest and lowest.  This is only done when the result would have a massive effect on the campaign and would have been due to extreme good or bad luck.

On balance I feel that the wargames are not decided on luck alone.   Tactical skill plays a much larger part, as does knowledge of the wargame rules.

But because the result of a wargame will affect the outcome of the campaign, which a lot of people have put a lot of work into; I feel that it is acceptable to moderate an exceptional run of good or bad dice.

This does not apply every time a couple of one’s or sixes are thrown, only when it is at a critical part of a campaign wargame.   Then we roll another two dice, and take the middle score of the three.   Not quite as drastic as the “old school” saving throw, but sufficient to offset the effect of too much good, or bad, luck.

If you want to know more about our wargame rules you can find them here:

Posted by thistlebarrow at 15:56 No comments:

First battle of the Burgos Campaign 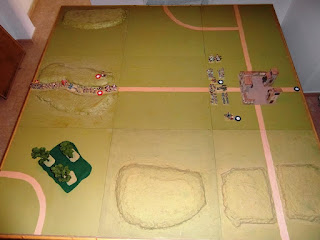 It took ten campaign moves to produce the first battle/wargame, but it was worth the wait.

The French general Leval held the town of Aguillar with one of his two divisions.    On the fourth campaign move General Hill arrived at the town with his 1st British division.   The two divisions carried out a recce, which resulted in an indecisive skirmish.   Both waited for reinforcements.

Leval’s Italian division arrived on move nine, which was nightfall on 22nd August 1813.   H e immediately ordered his corps to prepare to attack the British at first light next day.

Meanwhile Hill had received a rebuke from Wellington that he was taking too long to attack, and allowing the French to concentrate.   He was not aware that Leval’s second division had arrived, but he was aware that his Spanish division was due early next day.  He ordered his British division to attack at first light.

So the battle of Aguillar was to be an encounter battle.

The game opened with the British moving through the high ground towards Aguillar.   Hill immediately realised that he was facing two French divisions, and ordered his division to halt and deploy in an attempt to hold the pass until his Spanish division arrived.

At move five the Spanish started to arrive.    They were a regular division, and almost as good as the Italians they faced.   They caused the Italian division to abandon their flank attack and turn to face them instead.

By now the French infantry columns were closing on the British.   The Portuguese brigade had already broken due to artillery casualties and the nearest British infantry has suffered light casualties.   The odds were now firmly in favour of the French, and an allied defeat seemed on the cards.

At the start of move six the British line moved forward and engaged the leading French column in a firefight.   The French were an elite brigade, and given the British casualties the odds were about even.   Now it was down to luck.

The British just won the firefight; the French rolled a low dice for their morale.  The French lost their morale and routed.   Under our rules any friendly brigades within 4” (supporting distance) have to test morale for a rout.   The nearest one rolled two D6 for a total of 3.  They also failed and joined the rout.

Next was an Italian brigade in square.   They were poor quality infantry (C class).   They rolled a total of 4.   Again a fail, again a rout.

Next was a brigade of French dragoons with 10% casualties.   They managed a total of 5.   Not a rout, but also a fail resulting in them being shaken. 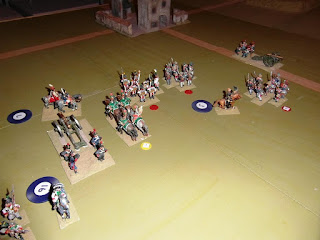 Collapse of the French centre

Within one move Leval’s centre had broken and run.  One third of his infantry were in rout and half of his cavalry shaken.   The apparent easy victory had turned into a defeat.   Not a major one, but one that would force him to retreat and abandon Aguillar.

It was a long wait for the first battle, but it was well worth it.  One of our better wargames in a long time.

Posted by thistlebarrow at 12:48 No comments: