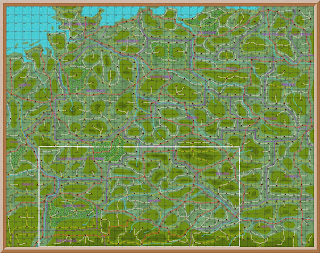 The campaign map of Germany is 37 squares wide by 29 squares deep.  Each square is a battlefield or wargames table.   This map is too large to use on the campaign diary blog, it is also too large for detailed work.   So I make a smaller map for each of the five campaign areas.

The white box on the map is the area used for the campaign in Southern Germany.   It is 24 squares wide by 12 deep. 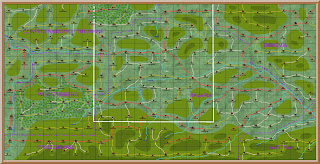 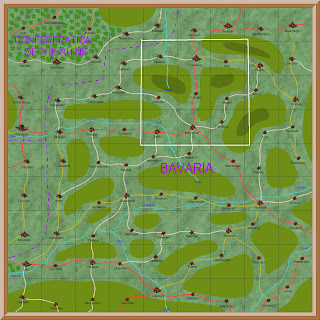 The white box on the map is the area for the tactical map for the Erlangen phase.  You will note that the town of Erlangen is in the middle of the nine squares.

On this map you can see that there are different types of cities or towns.   The capital cities, such as Wurzburg, have a cathedral.  They may be either open or walled.   Other cities, such as Bamberg or Nuremberg, are indicated by a cluster of buildings.   Again they can be open or walled.   All other towns are indicated by a group of two buildings.   Any city or town adjacent to a national border are walled.   All other cities or towns are open, unless they are known to be walled, such as Augsburg.

Maps have to be quite small to be able to read on the Campaign Diary Blog.   If I did not record the campaign on the blog I could make do with the large map of Germany.   Although it is impossible to read the detail on the blog, it is easy to enlarge it to work on the computer.

Next time I will explain the tactical maps, which are used to provide the actual wargame table.
Posted by thistlebarrow at 19:26 No comments: