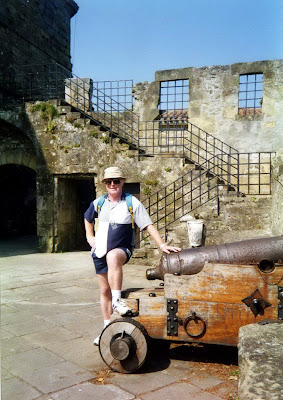 In 1995 Jan and I spent a week visiting the Napoleonic battlefields of northern Spain and the Pyrenees. Our last day was spent at San Sebastian.

From our holiday base at Fuenterabbia we had a 140 mile drive to catch the ferry from Santander, and San Sebastian was on the way. So we had all day to explore the town before driving to our overnight accommodation just outside Santander.

San Sebastian is a very modern holiday resort, and much enlarged since the siege of 1813. There is little remaining of the siege works, and the castle is now a ruin. It sits on a large hill called Mount Orgullo, which dominates the old town.

Unfortunately the castle museum was closed, but we were free to explore the hill and the ruins of the castle. With the help of Jac Weller's "Wellington in the Peninsula" were were able to follow the stages of the siege.

When we had sufficient of walking around the ruins, we made our way to the old town and found a pleasant cafe in a small square to have a late lunch shaded from the hot sun.

You can read about our visit at: