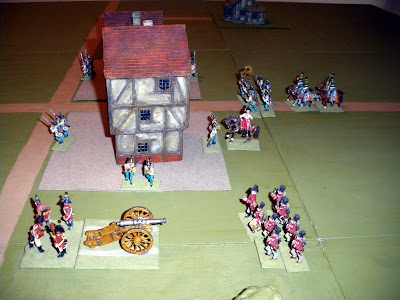 Four days and 16 moves into the campaign the first battle is about to take place.

The Austrians have invaded Bavaria and isolated the garrison of Passau on the northern bank of the river Danube. To do so their two leading corps have left their reserves three days behind.

The Bavarian commander is determined to take advantage of this mistake and crush them before their reinforcements can arrive. He orders his army to march on Passau. The first engagement is at the town of Mattsee, between Salzburg and Passau.

The transfer of the battle from the map to the wargames table has been published on the blog today. One move of the game will be published each day. You can follow it all at