Fighting in Built Up Area 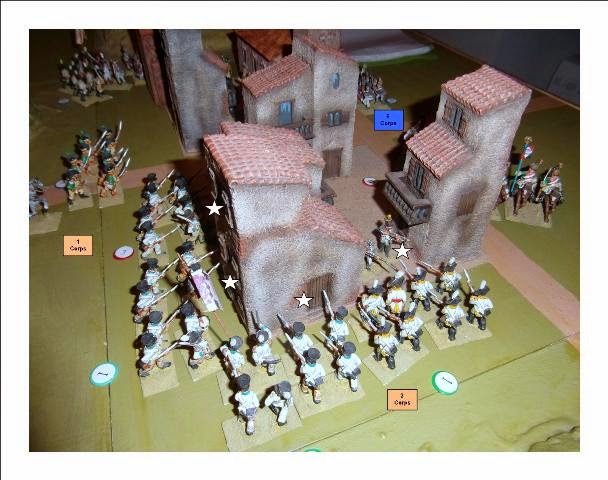 We have been experimenting with fine tuning our rules for attacking built up areas.

The garrison has a big advantage over the attacker, which can be reduced by casualties to the garrison.   However it is very difficult to inflict casualties, either by artillery or skirmish fire.

The outcome is decided by rolling 2D6.   The garrison get plus 2.   Both get plus for A class troops, minus for C Class or casualties.

We now added plus one for outnumbering the garrison by at least two to one.   This reduced their advantage to plus one before the dice throw.

Each attacking brigade fight one round of combat.   Casualties are not taken into account until all combats have been resolved.

We are quite pleased with this outcome.

The Spanish will now have to decide to put one brigade into the town section as a garrison.   All of their brigades have casualties, so they will select one of the two with only 10% casualties.

If the French have a reserve brigade in support of the town they can contest the occupation.    They will have had to test their morale because of the routed garrison.  Providing that they pass they can enter the town at the same time as the Spanish brigade.   Both will then fight a melee, with no garrison advantage to either side.   It is likely that the French will win.

If both sides have reserves they can contest the town for as long as the reserves last.   Neither side will get a garrison advantage until they have reached the far edge of the town section, and held it for one move.
Posted by thistlebarrow at 22:29 No comments:

In mid February I started the new PBEM campaign.   It is very similar to the previous 1814 campaign, but covers five geographical areas instead of six.

Since then I have been transferring players from the earlier campaign as and when a phase is completed.   I would rather have just closed the 1814 campaign, but quite understandably most players wanted to complete their current role.   About half transferred to the new campaign, the remainder resigned at the end of their phase.

I have managed to fill all of the campaign commands, except for one.  I need a player to take on the role of General Giron, commander of the Spanish Army.

If anyone would like to know more, they should follow this line to the Campaign Diary Blog, and then select Labels 01, 02 and 15.
http://1813pbemcampaigndiary.blogspot.com

To take part in the campaign you would need to join the Yahoo campaign forum, which is a notice board and discussion area for the campaign.   You will find it here]
http://uk.groups.yahoo.com/group/napoleonicpbemcampaign

Posted by thistlebarrow at 20:00 No comments: 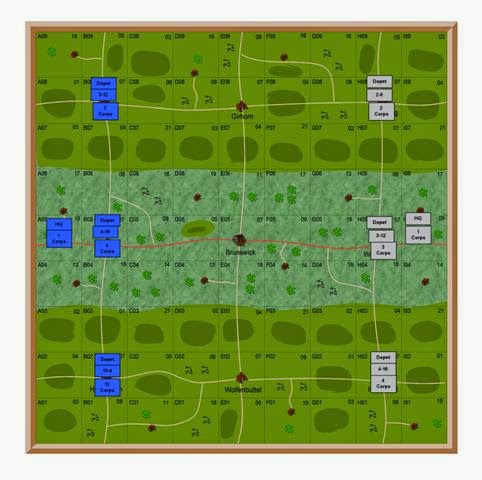 Deployment and depots at start of campaign

The administration of our PBEM campaign is entirely manual, so the supply system has been kept simple.   Despite this some of the players seem to find it difficult to master.   It is not unusual for corps to run out of supplies, and suffer the consequences in loss of casualties due to attrition.

Each player is an Army commander with four corps.   They start the campaign with each corps holding four days supplies, and a reserve of sixteen days in the depots.

To resupply a corps must be within one day’s march of a depot.    They must halt for 24 hours and not fight with the enemy.

Depots can be established in any town controlled by the Army commander.   To do so takes one full strength infantry brigade one full day.   A brigade must remain in the town as the garrison.   Each depot provides one days supplies each campaign day.

Army commanders can move up to four days supplies between depots each day.

Each army uses four days supplies (one per corps) each day.   So to maintain the supply levels that they start the campaign with they would require four depots.

The aim is to present each Army commander with a simple solution to his supply problem.   However he must balance the following:

To maintain his supply level he must devote one quarter of his infantry to garrison duty.

He must control the issue of supplies by confirming which corps is supplied from which depot with how many days supplies.

He must ensure that his depot system keep within one days march of each corps.

The aim is to reward the player who plans his supply system, and punish the one who does not.   When a corps runs out of supplies they lose 10% of one brigade to attrition each day until they are resupplied.

A corps cannot resupply during a battle, nor on the day following a battle (because the loser has to retreat and the winner has to regroup).   So it is advisable to ensure that all corps have the maximum four days supplies whenever possible.

Obviously the corps have to manoeuvre and react to the enemy movements.   So there is a constant balance between wanting to move a corps, and maintaining maximum supplies.

Given such a simple supply system, it is surprising how often corps are allowed to run out of supplies, and to suffer the consequences.
Posted by thistlebarrow at 13:10 No comments: 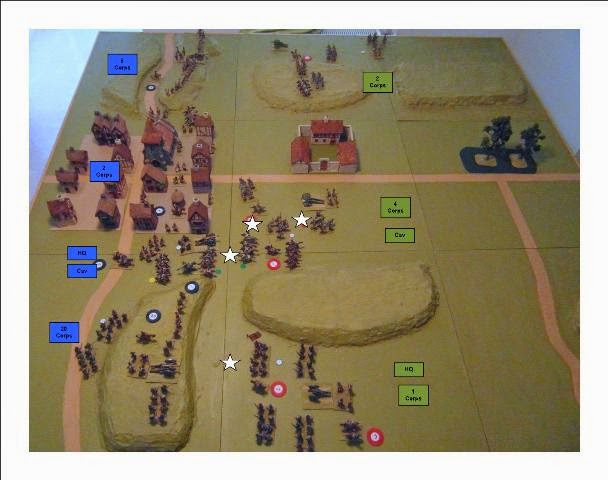 We experimented with using combined cavalry brigades in this week’s wargame.

It was a medium sized wargame, with three corps per side.   But the terrain was very crowded, with hills and a large town reducing the space available to deploy.   The only space available for the cavalry was in the centre. 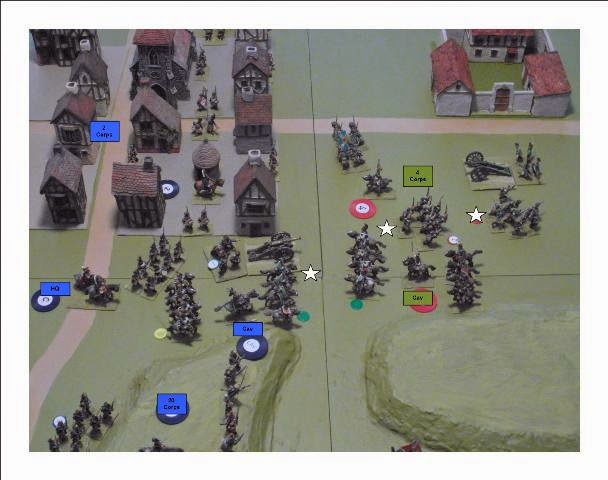 As the Russian infantry neared the town, the leading French cavalry brigade charged them.   The infantry failed their morale to form square, broke and routed.   They took the reserve infantry brigade with them (top to white stars in photo)

Our morale rules allow disordered brigades to become formed at the end of the move.   Thus the forward French and Russian brigades would be able to charge again at the start of the next move.   The shaken French brigade would have to pass a morale test to rally to disordered.  If he had a poor dice he would remain shaken or might even rout.

So far so good.  If the Russians lose the next round of melee, their reserve brigade will be able to cover the retreat of their forward brigade.   If the French lose they will have no reserve to cover their retreat.

It would be much better if there were space to deploy both cavalry brigades in echelon, so that the leading brigade would be able to retire, or even rout, without making the reserve brigade disordered.

I am pleased with the use of larger cavalry formations in this first wargame.

In future games, with more space to deploy, it should be even more decisive.

Posted by thistlebarrow at 11:14 No comments: