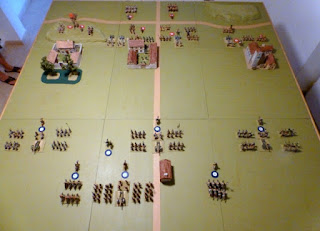 For the first time in many years our PBEM campaign has failed to provide us with a battle to wargame.

This is partly due to starting a couple of new phases, which are always quiet for the first few days.   In addition a couple of commanders are following a cautious campaign strategy.   Nothing wrong with that, but it does not provide a lot of battles.

We had some friend’s visit last week, who are curious about our wargaming.   So we wanted to have a large game on the table to demonstrate.  We wanted something they would have some knowledge of, so we choose Waterloo.

However I laid the table to resemble Waterloo.   On the left is a walled farm to represent Hougoumont, a similar model in the centre for La Haye Sainte and a village on the right for Papelotte/Smohain

More important was the red coated British infantry (supported by Portuguese in place of Dutch) commanded by the familiar figure of Wellington.  And opposite the French horde with their familiar Old Guard and the famous grey coat of Napoleon.

I would not want to defend the terrain as being Waterloo at a wargames show, but it was close enough.   They recognised Wellington and Napoleon and has at least heard of Waterloo.

The setup also gave us an opportunity to fight a one off fun wargame, which we both enjoyed.   We had to clear the table before the natural end of the wargame, because the campaign had produced a “real” battle for us to wargame.

But it was good fun whilst it lasted.
Posted by thistlebarrow at 15:33 No comments: 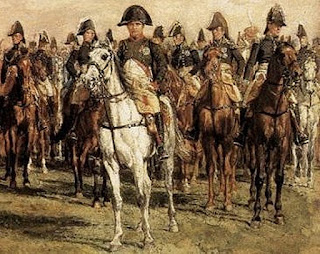 The campaign has five geographical areas, each with its own French and allied army.   Each is independent of the other, but they all run on the same time frame.

The intention is to run a series of mini campaigns, or phases, each of similar size and scope as the Waterloo campaign.   I had hoped that each phase would produce about four or five battles to wargame.  I anticipated that there would be one or two small battles (one corps per side) leading to a major battle (all four corps per side).   I had never intended to limit the number of days each phase would last, prefering to let each run its natural course.

It has worked well for the past five years, always producing sufficient battles to ensure that we always had at least one to wargame.   However over the past few months I have noticed that there are less and less battles.   It would appear that the current army commanders are more inclined towards a defensive campaign, rather than an aggressive one.

The result is that for the first time in all those years we have actually run out of campaign battles to wargame.

This has prompted me to reconsider the structure of the campaign.    From my records I can see that most phases last between 12 and 15 campaign days.  Each day takes about one week to process, so each campaign phase lasts about three to four months.

However they have been notable exceptions, when one commander does not want to accept defeat.   The longest phase so far has been 28 days, a massive seven months.

These longer phases become increasingly difficult to administer.   Supply becomes a serious problem, and battle casualties dominate the battles.   This is because some commanders just want to attack, attack, attack.   It results in battles where the attacker is so weak from earlier battle casualties that they have no chance of winning.

So I have introduced a limit of ten days for each campaign phase.   This is long enough to fight those four battles that I mentioned.   It is also long enough to provide serious supply problems to those commanders who have not made any plans to resupply.

At the end of the ten days either commander can ask to extend for a further two days.    This is to prevent a player gearing his whole campaign to a final attack on day ten, despite having ignored supply and battle casualties.

It will also provide prospective players with a time limit of three months for each phase.   At the end of that time they an either leave the campaign, or carry on with the next phase.

Equally important it will allow me to introduce adjustments to the campaign at regular intervals.   I find that the campaign rules, administration and maps change frequently as a response to problems encountered.   It is very much like using the same wargame rules over a long period of time.  Problems are encountered which require adjustment or amendments to the rules.

It will be interesting to see how the time limit affects the player tactics.   The “ticking clock” should produce a faster moving campaign, even though most previous campaigns would have been completed by the end of the new twelve day limit.
Posted by thistlebarrow at 12:33 No comments: 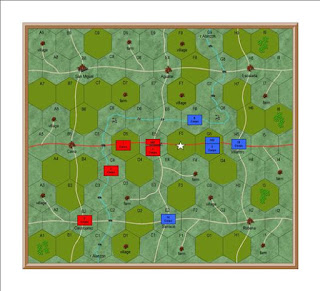 Hex Grid Tactical Map
I recently I changed all of the campaign maps from square to hex grid.   I decided to do so following a couple of comments from players that they did not like being restricted to north, south, east or west movement from each map square.   A hex grid map would allow much more freedom of movement.

Having done so I was also quite pleased with the hex grid maps.  I think that they look better than the square grid maps.

To overcome this problem I sent each player two tactical maps, one with squares and one with hex.

However I have now spotted a major flaw. 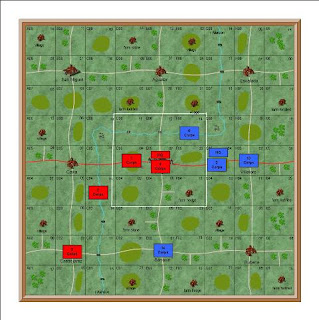 Square Grid Tactical Map
This square grid covers the same area as the above hex map.  If you look at the French corps top right you will see what I mean.   On the hex map this corps has an empty hex between them and the city of Burgos.   On the square map they are in the adjacent square. 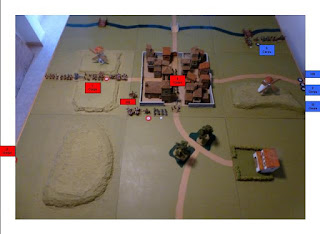 Wargames table at start of battle

Here the problem is even more obvious.   The French corps top right should in fact be at the edge of the square, placing it a few inches from the wall of Burgos.   They should be a full 24” from the city wall.   I have placed them 12” from the city wall as a compromise.

This is a major problem, because the whole campaign was designed to provide interesting battles for Jan and I to wargame.   The map was designed from the table, rather than the opposite which is more usual.

It is important that the wargame opens with 24” between the two armies.  This is slightly longer than long range artillery fire.  It allows the attacker to deploy out of artillery range, and the defender to inflict some casualties as the attacker moves to attack.

This is a good example of change for the best of motives proving not to be for the better.

I will be changing back to square grid maps at the end of each current campaign phase.

Posted by thistlebarrow at 11:48 3 comments: