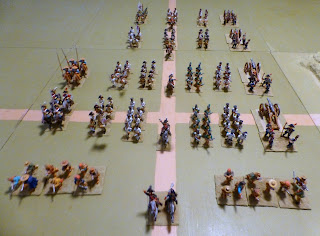 At the end of each campaign phase I consider how the phase has played as a wargame experience to see if there are any lessons to be learnt.  This will consider both campaign and wargame rules.   As the purpose of the campaign is to provide good wargames both serve the same purpose.

The end result is usually a little fine tuning in one or two rules.   However by far the campaign area which requires the most adjustment is southern Spain.

I am not trying to achieve historical results for either the French or Spanish armies.  Almost all formal battles were won by the French and usually resulted in the destruction of the Spanish field army.  This would not work well in an extended wargame campaign. 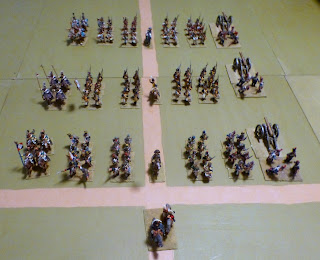 Most of the flavour of fighting in the Peninsula is to be found in the map campaign, rather than on the wargames table.

Over the years I have developed simple rules for guerrilla combat, which are resolved off the wargames table.   Each town has a Spanish militia brigade as garrison.  When the town is captured by the French the garrison take to the hills and become a guerrilla brigade.   They must remain within range of their original town, and can attack any French brigade, whether garrison or escort for supplies.   One D6 is thrown to decide the outcome, and the odds are always with the French.  However if the guerrilla get lucky it can have serious consequence for the French lines of supply.

The Spanish Army has four corps.   Two are the same as the French corps, though not such good quality.  Two more have three infantry brigades and corps artillery.   Only in southern Spain are the French and allied armies of different strength at the start of the campaign.

At the start of the campaign the Spanish field army must hold their objectives until attacked and forced to retreat.   This follows the historical habit of the Spanish being over confident at the start of a campaign.

The French will usually win the opening battles, and the Spanish retreat and concentrate.    As the French advance they must establish secure lines of communications.   The more they advance the more garrisons are required, and the more Spanish militia brigades who become guerrilla.

The French can only carry four days supplies, and have to halt for one day to resupply. This often allows the Spanish to break contact, retreat and take up a strong defensive position.   If the French can hold their lines of supply they will be able to pursue the Spanish.  But by detaching infantry brigades to establish supply depots they become weaker.

The table top battles are less historical.   Although the Spanish infantry are mostly C class, many of the French are the same.  This reflects that Napoleon moved many of the best troops in Spain to rebuild his armies in Germany after the disaster of 1812.   At least half of the French infantry in Spain are also C class.

However the French do have greater numbers of cavalry, and this is very decisive on the table top.   Poor quality infantry find it difficult to respond to fast moving cavalry, and in particular Spanish artillery are very vulnerable.

The overall result is a campaign which has a real feel of the historical fighting in the Peninsula.

The introduction to the Albacete campaign phase is on the 1813 campaign diary.   It includes maps, orders of battle and background to the campaign.    You can find it here

A Question of Scale 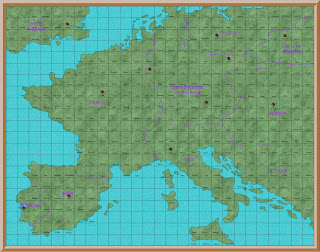 I know that a lot of wargamers feel that scale is very important.   Whether it is to determine movement, ground covered by a battalion, movement distance or firing range.   I have long since given up on scale, as you always have to compromise in order to have a playable game on a reasonable sized table.

When I designed my current campaign I was only interested in one scale.   The relationship between the campaign map and the tabletop.   Because I was restricted to a table 6x6 foot the size of each battlefield was decided.

This meant that I would have to make a fictional map to ensure that each grid square on the map would cover the same area as my wargames table.   This square, and my table, would represent one days march for a corps.

The fictional map of Europe is the result.   It is roughly based on the actual map of Europe.   Each squares is 21 miles and is one days march.   For campaign purposes each has a major town or city.   This will also be the area of a wargames table. 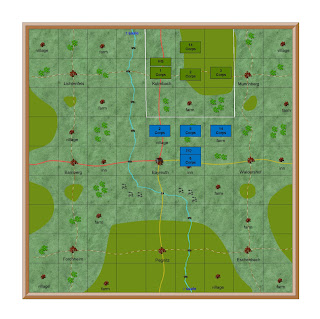 When I decided that I would use 2x2 foot scenic squares to create my wargames table, it became necessary to show these smaller and more detailed squares on the campaign map.   There was not sufficient room on the map of Europe, so I would have to create a smaller strategic map.

The one above is the strategic map for the Bayreuth phase of the campaign.   You will see that it covers 3x3 squares of the map of Europe, with the city of Bayreuth in the centre.   However there are now 9 smaller squares to represent the 9 scenic squares on the wargames table.   The city or town shown on the larger map is in the centre of each of the 9x9 squares.

Each of the smaller squares is 7x7 miles.   So the distance between each town (three squares) is 21 miles.  This is the same as the map of Europe.

However each of these smaller squares allows me to show the exact terrain features which will be shown on the wargames table.

The eight corps which will take part in the battle are shown at the start of the battle. 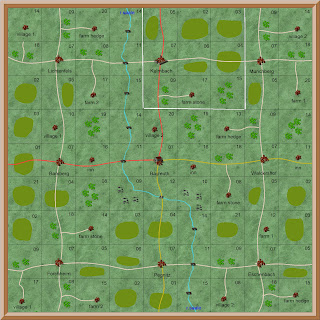 The strategic map is designed to look similar to the Europe map, but with more detail.   However the wargame map is designed to transfer from the map to the table.  It covers the same area as the strategic map, but each square is numbered and shows the exact terrain which will appear on the wargames table.   The 9 squares outlined in white is the area which will be shown on the wargames table   The number in the top right of each square is the same as the scenic square to be used. 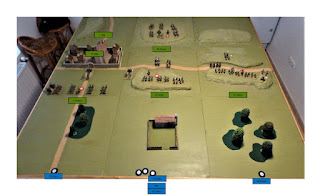 The 9 squares shown on the strategic and wargames maps now make up the wargames table.   The four Russian corps are deployed on the three centre squares, with the reserve corps behind the centre.   The three squares nearest to the camera is the “no mans land” between the two armies.

There are 12 moves in a wargame, and each move is one hour.    On the strategic map each corps can move three squares per day, which is 7 miles per square.   On the wargames table it takes a corps four moves to pass through one square.

Posted by thistlebarrow at 13:10 5 comments: