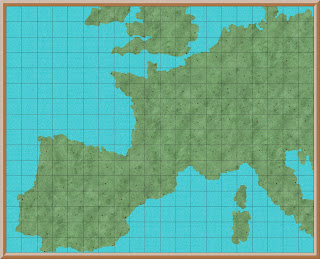 My 1813 campaign is situated in Germany and Spain.  I created this outline map of Europe which included major cities.   It covers Berlin and Vienna on the right, and extends to Portugal and Gibraltar on the left.   I used this on the campaign blog to show where the five campaign areas are (three in Germany and two in Spain).  Each city is named, but the scale is too large to read them on the blog. 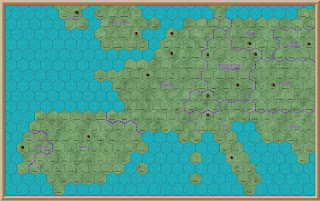 The new map covers an even larger area, as it extends to Warsaw in the east.   But because it is not to scale it does not have to be so large.   Each hex is a campaign phase area.   All capital cities are shown and major national borders.   Each hex has the name of the city it contains, which will also be the name of the campaign phase.   On the computer the detail is quite clear, and even on the campaign blog it is possible to see the major cities.   It is quite easy to see that there are ten hex from Paris to Berlin. 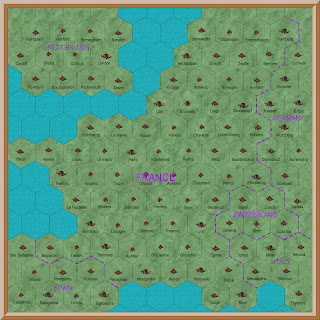 The next step was to create a national map of Germany and Spain, which I have shown on the previous blogs.    When I had done so I had duplicated the maps which I used for the past ten years for my 1813 campaign.

However I wanted to expand the campaign options to include France.   This would give me the option to include France if I wished to do so.  It also made it easy for me to determine where the eastern edge of the map of Germany went.   To make this easier I extended the map of France to include the border hex on the German side. 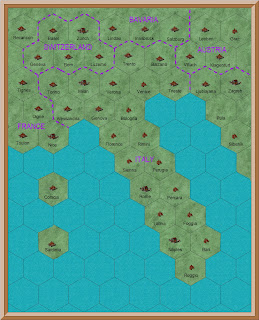 I don’t have any plans to extend the 1813 campaign, or even a possible 1814 campaign, to include Italy.   But I thought it best to create a national map of Italy in case I should ever want to change the entire campaign in the future.  It’s to do them all at the same time when the principles are fresh in my mind.

So now I have a comprehensive and interlocking series of maps to include all of Europe, with a clear set of campaign phases.   I have also created more detailed campaign maps of the five geographical areas included in the current campaign.   And if I wanted to extend it to include France and/or Italy it would be easy to do so for them.

Posted by thistlebarrow at 12:24 2 comments: