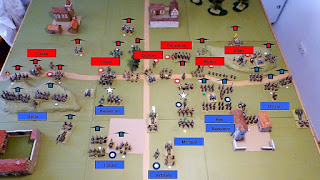 After some delay we have at last completed the Nearly Waterloo wargame, and it has been posted on the Nearly Napoleonic Battles blog

It made an interesting change to fight a one off wargame, rather than one of our usual 1813 campaign battles.

I gave the French an advantage of 16 infantry brigades against the British 12 brigades.   This may have proved too big an advantage.

We followed the outline of the historical battle.   It opened with a French corps attacking Hougoumont, La Haye Sainte and Papelotte.   All three were forward of the British battle line, and difficult to support.   The overwhelming French numbers allowed them to swamp the garrisons.

Hougoumont fell quite quickly, but surprisingly La Haye Sainte held out.   This despite the French having more artillery in support than at Hougoumont.   The garrison held because they rolled very good dice for morale as their casualties increased.

The French won, and that result was never really in doubt

We enjoyed the game and will certainly continue with this occasional series of one off games based on historical battles.

You can read the battle report here

I have also done a video slide show of this game so that there will be easy access to subsequent games in the series, rather than have to find them on the blog.  You will find the slide show here

Posted by thistlebarrow at 15:54 3 comments: 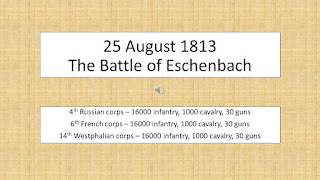 I have recently been experimenting with doing a Powerpoint battle report as an addition to the previous battle report.

The first video or slide show is now on the most recent battle report.

The blog is mainly for my own interest and as a record of the campaign.  But it is also generally available for anyone interested.   I am hoping that the addition of this type of battle report may make it interesting to any casual visitor.

It is hard for me to gauge whether this type of slide show improves the blog sufficiently to make it worth the extra effort of producing it.

I would welcome any constructive comments from any readers who would be prepared to view the blog and link to the slideshow.

You will find the blog here:

Posted by thistlebarrow at 11:03 No comments: 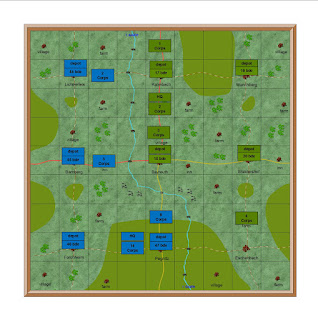 Campaign Map
There was a break of almost three weeks between the end of the Leon Campaign and the start of the Bayreuth Campaign.   This is the longest gap in the 1813 campaign since it started in July 2009.

This was partly because of working on the “almost battles” project, but even more so on the PowerPoint slide show project.   Neither are completed, but I felt the need to get back to some wargaming.

It is surprisingly easy to get out of the routine of the campaign, even after such a long time.   We have both missed the regular wargames, and feel the need to get back into having one on the wargames table all of the time. 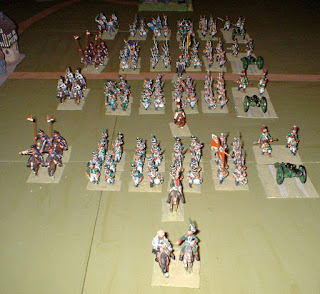 Russian Army
This is the twenty-eight campaign phase in the 1813 campaign, and the sixth one set in Central Germany.   It is unusual in that the French have won five of the previous campaigns.   This has nothing to do with the composition of the French and Russian armies involved, nor that one side has a particular edge in command ability.   Nor has it anything to do with whether Jan or I commanded one side or the other.   It is purely down to luck.

All five campaign areas have their own strength and weakness, as do the ten armies which fight over them.   Each campaign phase has different objectives, but always equal French and allied armies.  Apart from Spain, all have similar orders of battle.  Certainly all have similar numbers of infantry, cavalry and artillery.   The four corps in each army may have the same number of brigades.   But each is different in ability.   There is always one elite corps and one conscript one, plus two average corps.  The confusion of the campaign movement means that it is very unusual for the two elite, or the two conscript, corps to fight each other.

Then each army has different morale and combat abilities.   For example the British have slightly better firepower, but the French slightly better morale.  The differences are slight, and may be a plus or minus one in a combat or morale chart.   So the all deciding dice throw evens these difference out over a campaign which has six or so battles 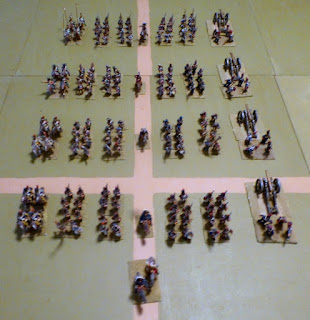 Second French Army
The latest campaign is unusual because a river runs divides the two armies from north to south.   In my campaigns almost all river sections have a bridge, and in addition are fordable either side of the bridge.  This is because I want to be able to wargame every single square on the campaign map, all 81 of them.   Artillery can only cross by a bridge, infantry and cavalry can ford.  However they do so at half movement rate, and are disordered when they do so.   This puts them at great risk if they are attacked whilst crossing a river.

Having equal sized armies also makes it very difficult for the attacking side.   They have the advantage of being able to concentrate in the early stages of a campaign, but they have to take full advantage.  They also have to be lucky in the early moves.   If the dice runs against them and they lose heavily in cavalry or artillery, they will find it very difficult to continue to attack.

Despite this all twenty-eight previous campaign phases have gone well.  I cannot remember even one where the campaign had to be abandoned because it had become too one sided too early in the campaign.   Mind running a solo campaign does mean that I can allow a defeated corps extra time to recover.   This was not possible when it was a multi-player PBEM campaign.

So pleased to be back in wargame mode and looking forward to some challenging but fun games.

You will find a link to the 1813 campaign blog below.  It contains details of the Bayreuth campaign including maps used, orders of battle campaign objective and history of the campaign in central Germany.