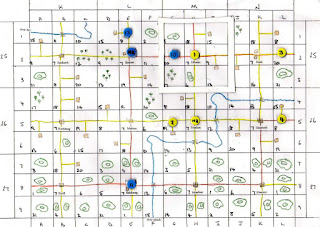 First Campaign Map
You can use any type of map for the campaign.   However it should have sufficient information to allow you to transfer any battles to the wargames table.   This is often the most difficult part of a campaign, particularly if there are more than one player involved.

I have found it best to make my own maps.  I can then include all of the detail which I will need to set up the wargames table.   Above is the map I used in my first campaign back in 2008.   As you can see it is hand drawn, and not very pretty.  But it does include the exact terrain that will appear on the wargames table.   There is a grid at the top and side for movement reference.   The number inside each square is the number of the matching 2x2” scenic square which will be used on the table.

In 2009 I discovered a map making computer programme called ProFantasy CC3.  It cost £30 and is the best investment I have made.  I am not very skilful but it even made my maps much better.   If you check out their website you will see the professional looking maps which the more skilled can make. 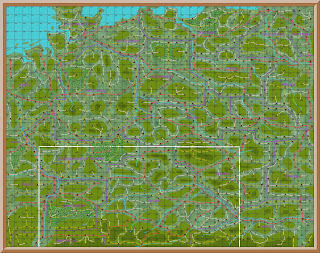 Map of Germany
I use a number of different scale maps in my campaign, most are used for planning and only one is used for campaign play.   The one above shows all of Germany, there is a similar one for Spain.   This map is made from an AA Road Atlas and Google Earth.   I drew a grid on the road atlas with each square covering about 15 square miles.   I then selected one city or town for each square.   The road system is fictional.  I connected capital cities with a red road and regional towns with a yellow road.   These are important for grand strategy planning for the campaign.  Each square on this map represents one days march and one wargame table.  The area outlined in white is the campaign area for southern Germany. 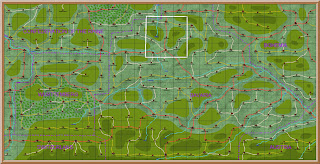 Map of Southern Germany
Even on a desktop monitor it is difficult to work on the maps of Germany and Spain.  So I made a smaller map for the campaign areas of north, central and southern Germany and north and southern Spain.   The one above is the area of southern Germany fought over by Third French Army and the Austrian Army.    The detail is the same as on the larger map of Germany, but easier to see and work on.   Each square on this map is also 15 miles, one days march or one wargame table.   The area outlined in white is the campaign area for the Erlangen campaign. 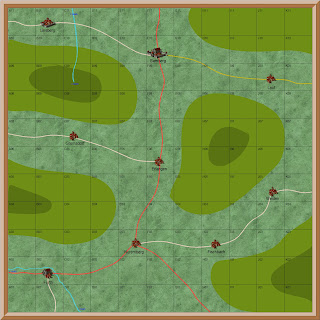 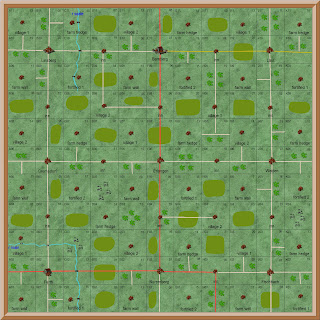 Tactical map of Erlangen campaign area
This is the tactical map used for all movement and transferring battles to the wargames table.   Each square has two numbers.   Top left is the campaign movement reference number.   Top right is the number of the scenic square.   The map shows not only cities and towns, but also villages and farms.  Woods and broken ground are also shown, plus hills and rivers.   When used in multiplayer games this map can be used to select good defensive battlefields in advance, or to try to force your opponent to defend a poor defensive position.

The only way to get this sort of detail on your campaign map is to make it yourself.   By doing so you can ensure that you not only use your model soldiers in sequence, but also your terrain.  You will see that villages and some farms have numbers.  This refers to permanent village and farm models.   Other farms are shows as wall or hedge.  This ensures that I use my model walls and hedges in turn.   There is nothing on the map which cannot be reproduced exactly on the wargames table.

It can be a lot of work to make this type of map, but it is well worth the effort.  And remember that they can hand drawn if you wish.

Next time I will cover the campaign rules
Posted by thistlebarrow at 10:44 2 comments: