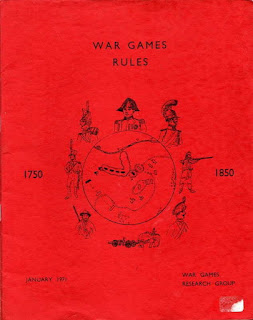 I am not sure when, or how, we discovered WRG rules.   Almost certainly from the pages of Don Featherstone’s “Wargamers Newsletter”.    They were produced in January 1971 and we must have obtained a copy soon after that.

To be honest I am not sure what wargame rules we used between 1969 and 1971.  I clearly remember reading “Charge”, and I also remember setting up the basic game to understand the rules.  I don’t think we ever moved on to the full rules.

I suspect that most of those two years were filled painting my newly acquired Hinton Hunt and Airfix figures.   Our first wargames were played on the sitting room table, or sometimes on the floor. 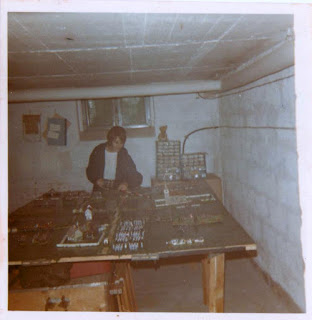 First Wargames Table
We moved to Germany in 1970, and this is a photo of Jan using our first wargames table.   We already had a fair collection of figures and scenery.   We lived in Osnabruck in North Germany, and like most German houses, we had our own cellar room.   It was pretty basic, as was our wargames table.   The table was custom made and could be dismantled to move when we were posted again.

From memory I would have said that we were using WRG rules then, but that cannot be so if they were not released until 1971.   Perhaps we were still using “Charge” rules.

But I do remember play testing WRG 1750-1850.   We have always found new rules difficult to master.   I could never grasp them by just reading through the rule book.  We always had to play a couple of games to understand how they worked.   The beauty of WRG was their laminated fast play sheets.  I think it was one page, printed on both sides.

The attraction of these rules for me was that they covered the Napoleonic Period, which is what I was really interested in.

I have never regarded wargaming to be anything more than a War Game, with the emphasis on Game.  I remember reading in one of Don Featherstone’s book that he felt the same.   Don had fought during WW2, and was very aware that wargaming bore only a passing resemblance to real war.   I served in the British Army for 22 years, and would entirely agree.

Despite this I always found wargame rules very frustrating once I had played sufficient games to fully understand them.  It was not long before something happened in a game which would clearly not happen in real life.   Our answer was always to roll a dice during the game, and try to amend the rules afterwards.  We soon found that doing so resolved the immediate problem, but often created many more unforeseen problems.

Fortunately during the 1970s Jan and I usually gamed alone.   So we only had to agree between ourselves to resolve any rule problems.
Posted by thistlebarrow at 18:16 2 comments: