The Battle of the Nive 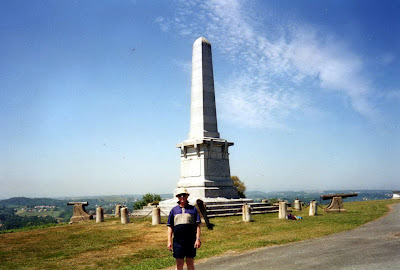 The battle of the Nive was Wellington’s attempt to drive Marshal Soult away from Bayonne and clear the way for his invasion of France. It is a complicated battle, fought over five days in December 1813 and covers a large area just south of Bayonne.

It is a difficult battlefield to explore as it covers such a large area and there has been much development since 1813. Fortunately parts of the battle were fought a few miles south of the city, and can still be identified. As well as driving around the area in general we visited two interesting points.

The first was the Croix de Mouguerre, a monument to Marshal Soult and his defence of Bayonne on a hill overlooking the city. This was the site of the last major attack when Soult tried to destroy Rowland Hill’s isolated command on the right bank of the river Nive.

The second is the beautiful Basque church at Arcangues. On the left bank of the river, this was the centre of the confused early fighting when the Soult launched his first attack on the widely dispersed allied army. The 43rd light infantry held the church and the French brought up a battery of artillery and opened fire at 400 yards. The two engaged in a duel which the infantry won when the gunners were forced to retire without their guns!

You can read about our visit at: