Napoleon on the March 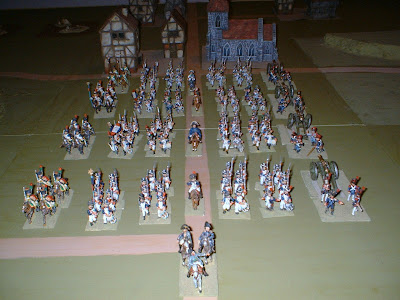 Napoleon reviews his army at Fulda


The 1813 Halle PBEM campaign has finally started. Napoleon and Kutuzov are marching towards the river Saale and the first campaign moves have taken place. The rules have changed considerably from the previous Magdeburg campaign, and there has been some delay as I exchanged emails with the ten players to get the first moves done. The whole routine is different this time, and there have been a few teething problems.

The system is now in place. Napoleon and Kutuzov send daily orders to their eight corps commanders, who then issue daily movement orders. I plot both on the campaign map, notify the corps commanders if they have a contact with the enemy, and they then confirm what they want to do. There are three moves each campaign day to allow for all of this to happen. I then send a daily situation report to Napoleon and Kutuzov, and they issue the next days daily orders.

We have completed the first day and are starting on the second. So far so good. Mind there has been no contact with the enemy yet! I remember reading that one general (I can't remember who) said something along the lines that all plans go out of the window as soon as the two armies meet in battle. We shall see.

There will be a daily report on the blog. As all movement is hidden from the enemy it will not be a daily updated map as with Madgeburg. The blog will be a general account of the campaign, along the lines of a newspaper or bulletin. I have to be careful not to give the players too much information about what the other side is doing. If you would like to follow it you can do so by clicking on PBEM 1813 Halle Campaign on the right.