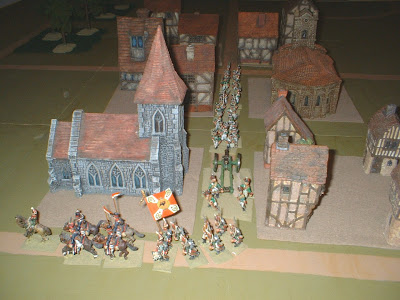 Although the King of Saxony has declared his country neutral this has not prevented the Russian army from entering Leipzig and taking possession of its military stores. Cossacks are approaching the east bank of the river Saale as the 1813 Halle campaign "hots up".

The PBEM campaign is approaching the first critcial phase, when the cavalry screens of each army contact each other, and both try to find out what the enemy is doing but prevent them from doing the same. With four corps, and four players, per side the next few moves of the campaign will be interesting as I try to keep track of who can see who and what each of them do.

You can follow the progress of the campaign by clicking on 1813 PBEM Halle Campaign Blog buttion on the right.
Posted by thistlebarrow at 09:05