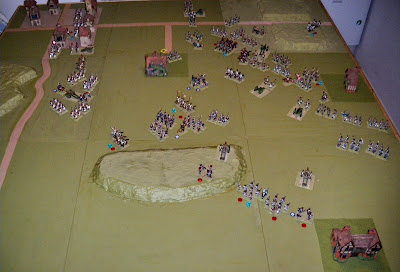 I know that many wargamers, perhaps even most wargamers, would prefer that luck plays only a small part in their games – if any part at all. I used to think the same, but more and more I have come to appreciate how the element of luck can add an extra dimension to a game.

The element of luck is particularly important if two people play together regularly. Jan and I wargame at least three times a week, though usually only two or three moves. So a full game can last a week or more. We both know the rules very well, and rarely make serious tactical mistakes. In those circumstances any sort of game, and particularly a wargame, can become very predictable and even boring.

All things being equal I would probably stand a better chance of winning. So I tend to command the army with the worse commanders, or the most casualties, or the one attacking rather than defending. This would move the odds slightly in Jan’s favour.

We found many years ago that when you wargame so often it is very difficult to create an interesting and challenging battle. We had always aimed at a set of rules which rewarded correct tactics rather than detailed knowledge of the rules. However we soon came to realise that this was an unrealistic goal. When you both know the rules very well you will always eventually learn the weakness of the rules and play to them. You may try not to, but it is human nature to want to win.

That is when I decided to increase the element of luck in the rules. They still reward good tactics, and I don’t think it would be possible to win if you did not use historical tactics. Dice for firing, melee and morale are 1D6. A very bad roll, say 1, at the wrong time can turn the tide against you. A very good roll, say 6, at the right time can present an opportunity to win the game. And a series of good or bad dice rolls can turn around a winning streak.

Let me give you an example. We are in the middle of a critical game which will decide the winner of our ill fated Halle PEBM campaign. The French started the game with a distinct advantage, so I commanded the Russians. In the first 6 moves the French had more luck than the Russians, particularly in regard to the Poor Card. You may remember I explained that when a Poor Card is drawn the next poor commander to have his move can not issue any orders? The French have one poor commander, the Russians two. In the first six moves my 4th Russian corps failed to move FOUR TIMES due to the Poor Card.

By move 9 things were looking very bleak for the Russians. The two brigades of the French reserve cavalry were poised to charge and break the Russian centre. They charged a cuirassier and a Cossack brigade. The result was inconclusive, with both sides winning and losing one melee each. The overall effect was worse for the Russians, as the resulting confusion caused two corps to halt their advance to bolster the centre.

Then the completely unexpected happened. The French right consisted of 3 French corps and 14 Westphalian corps. They were advancing against the badly shaken 4 Russian corps, the same one that had all the bad luck with the Poor Card. One Westphalian infantry brigade was Shaken. It would have to test its morale, if it passed it would become Formed at the end of the move. If it failed it would Rout, and open a gap between 3rd and 14th corps. The Westphalian commander joined the brigade, which would add one pip to its dice throw to make morale. But if it failed he would join the rout and not be available for the rest of its corps for a full move. He rolled a 2, and the brigade would have routed if he were not present. Because he was it still failed to make its morale, and remained Shaken, but it did not rout.

Next card drawn was 4 Russian. Their artillery fired and hit the Shaken brigade, who then had to test their morale again. This time they failed, despite the corps commander being with them, and routed – taking the commander with them. In these circumstances any unit within 4” must test their morale. There were two such units, one Westphalian infantry brigade and the 3rd corps artillery. Both were Formed and had no casualties. First the artillery tested, failed and routed. Then the supporting infantry tested, again failed and joined the rout. The Westphalian artillery was outside supporting distance of the original rout and did not have to test their morale. However second infantry rout was within 4” so the gunners now had to test morale. You guessed it, they failed and routed. Within the space of one move the whole game had done an about turn and the advantage gone from the French to the Russians.

To be honest this was a too much influence from luck. It is not unusual with our rules for a slight change in odds to result from a good or bad dice, but never anything on this scale. I have no idea what the odds against so many units routing, but certainly it is very unusual – and so it should be. And if you are going to allow the element of luck, then you must be prepared to accept the chance of such a thing happening.

The game is far from over, and the French could still very easily win. It has at the very least opened up the game again. The Russians are still in great disorder and it will take some time to sort them out. The loss of the French right flank does not have to mean that they lose, as they still have three corps well placed to take advantage of the Russian confusion. It will be interesting to see how it all ends.

If you want to read the full battle report you can find it here: