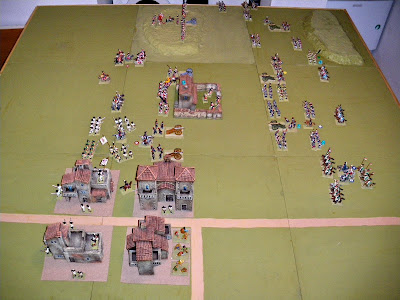 Our first wargame of the year is proving to be a very close run one, and very enjoyable. Its strange how hard it can be to get back into gaming after even a short break, and then when you do you realise how much you have been missing it.

The break was caused by two weeks in UK, followed by two weeks trying to sort out the PBEM campaign. I had to make a real effort to set up this game, which is the latest in our Wellingtons Battles series of games. But once we started it was if we had never stopped.

The rules are working really well, and the game is really enjoyable. The French had planned to "soften" the British infantry between the medellin and the city with artillery fire, and then storm them with two corps. The remaining corps, and the cavalry, would pin the Spanish.

So the game started with the French moving into position, but as soon as they came within range of the Spanish guns they started to suffer casualties. In my rules even one casualty has an effect of morale, and three casualties usually sufficient to cause a rout. The Spanish guns needed at least 9 with two D6, and scored at least one hit each round.

When a unit routs any other unit within 4" must also test morale. So it is possible, if not likely, for one rout to spread. So the French (me) started to panic, and ordered an advance before the "softening" had taken effect.

There are two types of attack. "Engage" means that the infantry skirmish or firefight, depending on what the player decides. French are better at skirmish, British better at firefight. But both depend on the dice. In either case it will usually take two or three rounds to decide. "Attack" means attempting to break and rout the enemy. This is decided in one round, but again dependent on the dice. Even if better quality troops, and outnumbering the enemy, the attacker can still lose if he rolls poor dice. So in either case it is something of a risk.

Each game lasts a maximum of 12 moves, and the above photograph is taken at the end of move 6. You can see that the French infantry are approaching within skirmish range, whilst the cavalry are holding back out of artillery range.

The game is about to become very interesting.

We have a free afternoon today and I will find out whether my risky attack is about to pay off or not.

You can read the battle report so far at: