Working on a new campaign 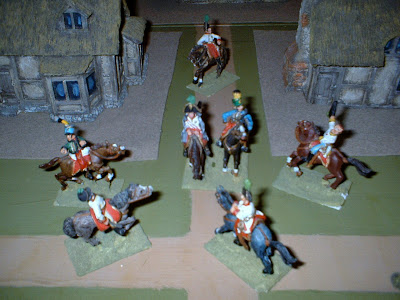 The weather here has been quite miserable lately with two days of low clouds and heavy rain. It’s also been very cold, for southern Spain anyway. So we have had not been able to get out much, and had to cancel our weekly walk. As a result I have had plenty of time to sit down and sort out the new campaign.

It will be a return to our solo 1813 campaign, after a break of almost seven months whilst I dabbled with PBEM campaigns. The 1813 campaign began in April 2009, and is only loosely based on the historical campaign. The first phase consists of five mini campaigns, three in Germany and two in Spain. Three have already been completed leaving southern Germany or western Spain to choose from.

It took me most of the day to read back into the campaign and to decide which of the two remaining areas to tackle next. I eventually decided on southern Germany. A Bavarian and Baden army is based on Munich to observe the Austrian army and prevent them from marching north to join the Russians and Prussians. The Austrians make a surprise march down the southern bank of the river Danube in an attempt to take Passau. Not unlike the 1809 campaign in fact.

I want to include some of the interesting elements of the PBEM campaign, in particular to avoid too much instant reaction. This is difficult to achieve with a solo campaign, and I am not sure whether it will work or not yet. I will keep the CinC strategic objective and daily orders, and the corps commander three moves within each day. I will also introduce terrain penalties on the tactical (battlefield) map. Plus I have three tactical maps, one for each side and one for the campaign diary. All of the paperwork has been done, and I am ready to start the campaign.

But first I must finish off the Halle PBEM campaign. We are enjoying the final wargame of the campaign, it is proving more interesting than any of the previous games. Deployment is taking longer than expected, as reinforcements are arriving throughout the first day. So it might be necessary to fight a second day if there is no obvious winner by move 12.