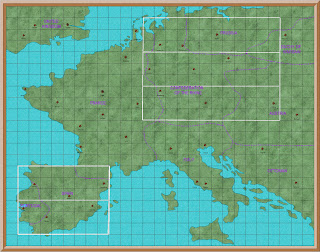 Like so many others, I had a lot of time on my hands last year

When this happens I usually review my 1813 campaign, and see how I could improve it.   Most often this exercise results in minor, or no, amendments.   The campaign has run non stop since April 2009.  It has of course changed since then, mostly in the maps I use.

Starting with hand drawn maps, I soon discovered Profantasy maps.   This is a computer based system for creating maps.  It transformed my poor maps into something very practical, if not very pretty.   I am not artistic, as was very obvious from my first hand drawn maps. But with Profantasy I could at least produce neat maps.

I needed maps to cover all of Europe, but in particular Germany, Portugal and Spain.   I needed national maps for strategic movement, and very detailed maps to transfer from the campaign map to the wargames table.

I quickly found that it was difficult, if not impossible, to find the type of maps I wanted online.   I did have quite a few useful maps in my library.   The most important of which was the West Point Military History and Atlas of the Napoleonic Wars.   This was very useful for detailed maps of battlefields, and also for grand strategy maps.   But the terrain details and borders of the smaller countries, particularly the Confederation of the Rhine, was difficult to obtain.

I could manage a reasonable series of maps with cities, towns and even villages in relation to each other.   Major rivers were not too much trouble.   But mountain ranges, medium rivers, and forests were the problem.

Making the smaller campaign maps, about the size of the Waterloo campaign, was not difficult.   But putting them together to form a map of Germany, let along Europe, was another matter.

I compromised for many years, but this year I decided to find a solution. 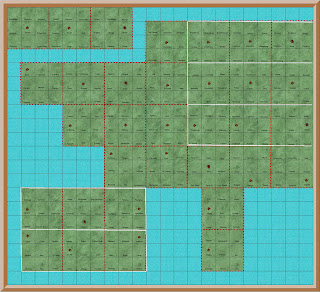 Each region was named after a major city.   National borders were ignored, for example Lisbon region included Badajoz, which is in Spain.   This was done because any campaign aimed at taking Lisbon would use Badajoz as a base for the French invaders.

Each of the five campaign areas have three regions

In Germany the left hand one is the French reserve area

The right hand is the Allied reserve area

The centre region is where the campaign will be fought

What I had not anticipated just how much work all of this would require.   Making the campaign maps (see photo 2) was relatively easy.    But that then had to be transferred to a scenic map for each region and district.   And that was only the start of my problems.

Since the start of the 1813 campaign I have kept a blog which is a diary of the whole campaign.   This has grown up over the years, and is now quite a complicated document.

This was not only to replace the old maps

But also to explain the new regional concept

Just as I completed all of the above I decided that I wanted to replace the old four corps army system with six corps.   But that is a project for 2021.