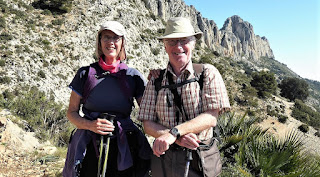 I don’t always do a review of each year, but this year was pretty exceptional and surely deserves one.

I try to keep this blog confined to wargaming and things military, I have another blog which records our hill walking and living in Spain generally.   But the coronavirus has had a major impact on our wargaming as much as any other aspect of our lives over the past year.

It is hard to believe that a year ago few of us had even heard of covid19, let alone how much it was going to change every aspect of our lives almost overnight.

We have had a better experience than many.  The first six weeks were a nightmare.   We were confined to our house and could only leave for essential shopping or to visit the doctor or chemist.  Even then only one could leave.   The Spanish police enforced these restrictions to such an extent that roads, villages and towns were deserted.   My wife was stopped by a police checkpoint who demanded the shopping bill to check the date, and then checked the boot to confirm that the groceries agreed with the bill.   One of our neighbours was fined for walking to the end of our road just to exercise.   Not pleasant, but it did result in total acceptance of the restrictions.  And still does, even though the police enforcement was greatly reduced at the end of the first lockdown.

However we do live in a lovely and isolated village inland from Denia on the Costa Blanca.   The village has a population of just 1000 and most work on the land.   Visitors are unusual and everyone knows everyone else.   It has a very safe feel in these difficult times.

Our normal routine is to walk twice a week with each of the two hill walking groups we run.   We also visit the coast once a week and go for short walks on most days.   In addition we have a couple of wargame moves each day.  We are fortunate to have a permanent wargames room, and there is always a game set up.

During lockdown we could not leave the house at all, so we relied even more than usual on our wargaming.   Without the distraction of walking I also spent a lot of time reorganising our long running 1813 campaign.

First I reorganised the index to this blog, which took me many weeks.

But the biggest task by far was to reorganise the whole concept of the campaign.

I always found it very difficult to make wargame maps which showed the main physical terrain of Germany and Spain.   Current maps do not show such terrain in the sort of detail which I would require for wargaming.   I was also difficult to find borders of regions and smaller nations and states.    It becomes very easy to become bogged down in detail of the areas where campaigns and battles were fought, but then impossible to find such detail of the rest of Germany and Spain.

I finally decided to create fictional military regions.   I will review how that has gone in the next blog.