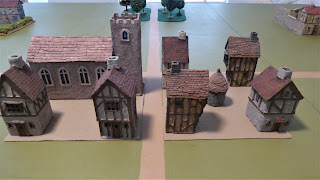 The first day of our new campaign involved a battle for the town of Weissensee.   It highlighted the difficulty of having simple rules for fighting in BUA.

On our wargame table BUA are represented by 6x6” squares of felt.  Suitable wargame houses are placed on them to represent villages (1 square), towns (2 squares) and cities (4 squares).   These buildings are removed to allow us to measure distance when troops enter them.

Our latest game involved a town, which is two squares.   Each square requires one infantry brigade to garrison it.   All casualties, morale and combat are calculated on one square.  So a city requires four combats, one for each section. 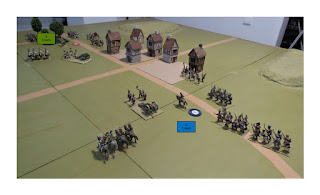 The French commander has detached two infantry brigades to attack the nearest section of the town.   The leading brigade has just entered the town, and a couple of buildings have been removed to ease measurement.   Only infantry can enter a BUA, and they move at 4” per move, which is half of column speed.

A second brigade is moving up in support.   Only one brigade can fight in a BUA, and one of our big problems is trying to write simple rules to cover supports.

Towns can only be attacked by artillery and infantry.  Artillery roll 2D6 and require 10 at long range or 6 at short range.   Minus 1 for each casualty and if the guns fired last time.   So you can spend a lot of time firing at a town and doing no damage at all, especially at long range.

Infantry can skirmish a town, roll 1 D6 and need 6. Get plus 2 for B class skirmishers.   Minus 1 for each casualty and also for target in hard cover.   So again it can take a long time to inflict any casualties.

Infantry can storm a town.   The garrison get plus 2.   If two brigades attack together the get plus 1.   The garrison usually wins unless they have casualties or are poor quality troops.   Elite troops in garrison are a real challenge.

But the latest problem is for fighting inside the town 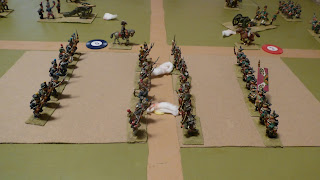 Previously we only allowed one brigade inside each town section.   Supports had to wait outside.   However it takes two moves to get  from one edge of the square to the other.

In our first attempt at Weissensee we followed that rule.   Both sides moved to the far edge of their town and the French charged the Russian brigade.   The first combat was a draw, both lost 10% casualties.   The second, third and fourth was the same.   In a draw both brigades are disordered, but carry on the melee.   When they reached 40% both brigades were automatically routed.   So after four moves of fighting both ran away!    By the time the reserve brigade came into contact it would be at least  move 10, too late to resolve the combat.

We then tried it with the reserve brigade allowed inside the town section, but not allowed to fight unless they moved through the forward brigade.  This would mean that if the forward brigade routed, the reserve brigade would require a very good dice throw to stand.  And even if they swopped over, both would be disordered for two moves.   Swopping could only work if there was a lull in the fighting.

It should not be a surprise to hear that after just one round of melee the forward French brigade routed.   The reserve brigade rolled their dice, and got 1.   They also routed.

Clearly we have not yet resolved the problem.   But we will continue with the reserve brigade allowed in the town, but not allowed to fight until swopped over.  I may have to adjust the rules, because they should have at least a 50% chance of being able to do so.