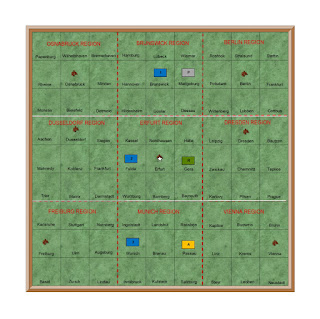 The next campaign is set in central Germany.

This is the second campaign phase of the new campaign

There are nine regions in Germany, and three in central Germany.

This phase is fought in Erfurt, the central of the three

Each square on this map is three wargames tables. 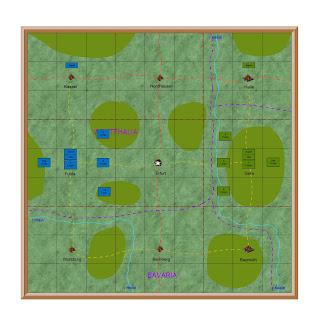 This map shows the main geographical features of the region, and also the location both armies and their supply depots.

There are nine towns on the map.  Each is a military district.   Each is also a possible campaign phase.

Each square on this map is also one wargames table 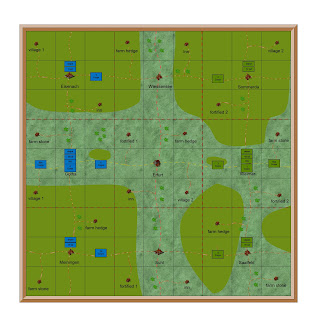 This is the campaign map, used for movement and transferring to the wargames table.    This map shows considerably more terrain features, such as villages and farms.   I use this map for the campaign movement. 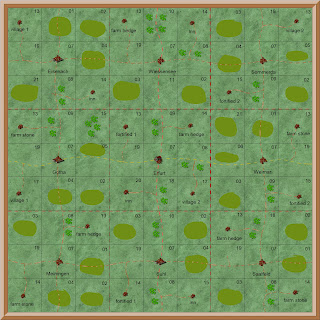 This map shows the same details as the previous one, but shows the actual terrain as it will appear on the wargames table.   For example the hills cover the same area, but are shows as they will look on the table.

Each square is numbered the same as the 2x2 foot scenic terrain.   Villages and farms are also numbered to identify the wargame models.   Where appropriate hedges and stone walls are also noted.

You will note that the strategic campaign planning maps, such as Regions of Germany, are in the new grid system.  The aim is to make it easier to identify the new military regions and districts.   Terrain features are not important at this level of planning.    These maps are used to decide where the next campaign phase will be fought.

The rest of the maps are more traditional.  They shows different levels of terrain features, because they are very important in the campaign and on the table.   The last map is designed to show exactly what the wargames table will look like.

With our summer routine we spend a lot more time on the campaign and the wargames table.  With the cooler weather we resume our two hill walking groups, and we have much less time for wargaming.