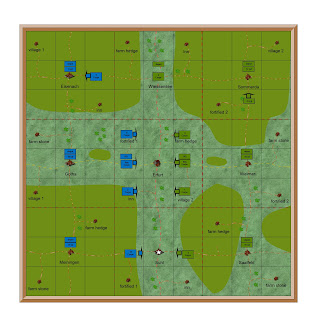 In the centre both armies concentrate for a major battle

In the south there is an encounter battle at Suhl 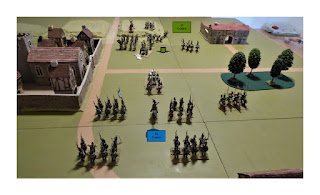 The civilians lock the gates and refuse entry to both armies

The next four moves consist of an exchange of artillery fire, which proves completely ineffective and no casualties on either side.

With just four moves left someone must advance and attack, or it will be a draw.

The Westphalians take up the challenge.

The infantry are ordered to advance, and the lancer brigade to engage the Russian cavalry.   Before they do so the Westphalian gunners fire one last time on the enemy cavalry.   The cuirassiers suffer 10% casualties, fail morale test and are shaken.   As a result they are unable to counter attack the lancer, break and run away.

This exposed the Russian artillery to a flank attack, and they withdraw immediately to avoid this outcome.   Their supporting infantry form square.   The Westphalian cavalry rally and threaten the enemy infantry

Meanwhile the four Westphalian infantry brigades advance in two columns of two in each.

The leading brigade on the right smash the conscript brigade opposed to them.   They rout into the elite Russian grenadier brigade trying to deploy behind them.   Both brigades run away

The Russian brigade on the left has to remain in square, due to the hovering lancer brigade.   This is not a good formation to meet a column attack.   However they not only hold their own, they win the first round of melee.

By now two Russian infantry and the cavalry brigade are in rout. The artillery are retreating with their guns.   Two infantry brigade cover the retreat.

Fortunately it is also nightfall, and the Russian corps can retreat under cover of darkness.   The Russians have lost 1500 casualties, the Westphalian only 400.

This battle was memorable because the walled town of Suhl was able to close their gates and defy both armies.   This was only possible because neither side could spare any infantry to storm the town.   Had they done so the town would have had to surrender immediately, as it did not have a military garrison.

This was only memorable because it gave me a good excuse to avoid a second wargame of both sides fighting over a built up area.   These never make for interesting games, because they rely entirely on the luck of the dice.   An there is always a good chance that the result will be inconclusive.

The Westphalian victory was a good result because both the Russians and the French have won one battle each.   Neither side have any strategic advantage, and both are in position to fight the first major battle of the campaign, which will be at Erfurt.

And whichever side lose the battle for Erfurt, their earlier victory will prevent an immediate collapse and will allow for a longer campaign as a result.