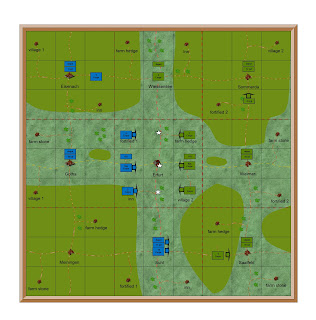 First major battle/wargame of the campaign

French attack Erfurt with two corps and their reserve

Russians counter attack with two corps and their reserve 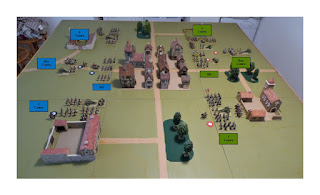 The city of Erfurt is represented by four town squares

The French army is deployed to the left of the city

Each army has 9 infantry and 3 cavalry brigades, plus 3 batteries of artillery

The cavalry and artillery of the reserve corps are C class, minus 1 for melee and morale 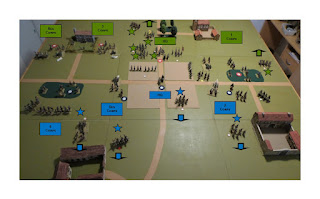 The battle is concentrated on the fight for the city

Both armies commit three brigades of infantry, each commanded by their CinC

This allows us to measure movement, deploy to fight, and measure retreats

The Russians hold both flanks, but lose more casualties than the French

But the French win because they capture the city

This was an unusually complicated game.   There were two reasons for this.

First the table was quite crowded for such a large army, and particularly the area taken by the city of Erfurt in the centre

Both flanks had terrain which was easy to defend, and the approaches were very narrow.

The Russians occupied the terrain on their side of the table, and only advanced into the city.

The French intended to attack, but found it too difficult to advance beyond their own terrain.   Consequently they also deployed to hold.

The French attack on the city was heavily supported by their artillery, and caused casualties to the Russian garrison.  This provided decisive when the French infantry attacked.

The Russian artillery concentrated on the French infantry and cavalry.  They caused a few casualties, but more important they made a French attack likely to be very expensive.  This resulted in a lack of fighting on the flanks.

Interesting wargame, but a little disappointing that it was again decided by town fighting.   This is always decided by the luck of the dice, though the French artillery did help the French attack.

I’ve only just managed to read the first three blog posts of your current campaign, and it seems to be developing into an interesting conflict ... although the presence and importance of the built-up areas seems to be changing the nature of the fighting.

This phase was not planned to test the town fighting, but it seems to have developed into that. Strange how you accept certain rules for years, and then one game prompts you to question how well they work. This has happened with the town fighting, and subsequent battles have given me an opportunity to test out alternatives.

Paul,
Your summary makes it sound like the adjustments to the town fighting have worked? Or perhaps not if it is still down to luck of the dice?!
Regards, James

Yes, much happier with town fighting.
With my wargame rules dice do play a very important part.
This is necessary my wife Jan and I always wargame together
We have done so for many, many years
Consequently we both know the rules VERY well
We rarely make mistakes based on the rules
So the dice element is really important to add a little spice to the game