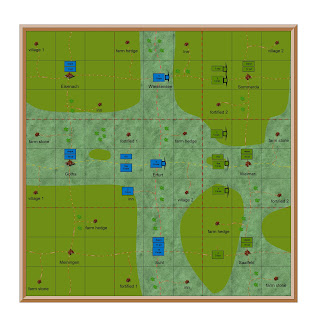 After three days of fighting both armies are urgently need of rest, regrouping and resupply.

Despite this Davout orders 5th corps to attack Wiessensee in the north.    However Wittgenstein has ordered 3rd corps to abandon the town and retreat to Sommereda.   They have closed the depot at Weissensee and taken all supplies with them.

In the centre 1st, 3rd and reserve Russian corps are forced to retreat to Weimar following their defeat at Erfurt.   1st corps is now out of supply, and the other two corps have only one day left.

The French are now in a very strong position.   In three days of fighting they have taken all three towns in the centre of the map, including Erfurt which is the campaign objective.   They have also managed to resupply four of their five corps.   Only 6th corps is now in urgent need of supply, and they can be supplied from the main depot at Gotha.

The Russian Army has managed to break contact and retreat to the three towns on the right of the map.   However they are now in urgent need of supply.   Two of their five corps are in supply, two have only one day’s supplies left and the fifth is out of supply.

This campaign is following the usual line.   First a period of intense fighting as both sides try to achieve an advantage.   This leave them both disorganised and short of supplies.   Both are now faced with a period of regrouping and sorting out their lines of supply in order to enter the second phase, which is larger and more decisive battles.

At this stage the winner of the earlier fighting is actually faced with more difficult problems than the loser.  To advance he must establish a new system of supply depots, otherwise he will move out of supply range.

The loser has fallen back on his supply line and is now within range of at least three of them, including the main depot.

In our campaign supply rules both armies always maintain a minimum number of supplies.   This is set at four days for each corps, plus four days reserve.   At the end of each campaign day I total the number of days held by each corps, plus the number held in all of their depots.   If this comes below the minimum, in this campaign 24 days, the balance is delivered to the army main supply depot.   In this campaign that is Gotha for the French and Weimar for the Russians.   This again is always to the benefit of the retreating army.

The French commander now has to plan the final offensive, and also reorganise his lines of supply to support the advance.   This will mean bringing his depots very close to the enemy.  So a defeat in the final battles could mean losing his supplies and having to retreat.

In this way I ensure that the campaign is never won until the final battle.