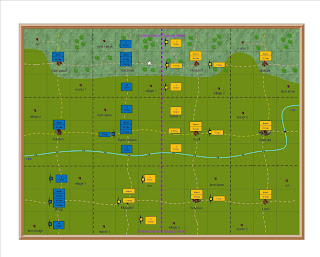 Marshal Massena is determined to hold the Kufstein/Salzburg border

9th army to rally at Worgl

General Schwarzenberg wants to follow up his victory at Kitzbuhel 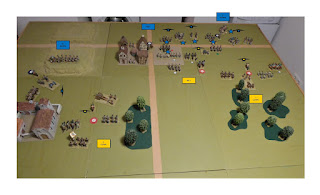 Austrians win the battle of Walchsee

At nightfall the Bavarians hold half of the town, but have six brigades in rout

During darkness they retreat and abandon the town

The battle was much closer than the casualties and final outcome would suggest.

The Austrians lost the first attack on the town, which was held by a militia brigade

Due to a poor dice throw, the attacking Grenadier brigade retreated shaken

Fortunately there were two reserve brigades, and they took half of the town on the second attempt

The Austrians also lost the first cavalry melee, but rallied and routed half of the Bavarian army

We fought this game twice, which is really very unusual

After just three campaign days, and two battles, the Austrians would have been reduced to two armies

Had it been a PBEM campaign, we would have felt obliged to accept the result

In doing so we salvaged the whole campaign phase.