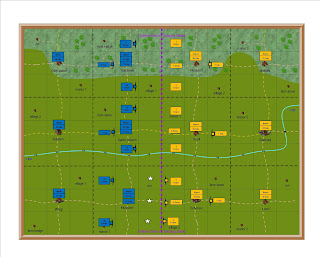 Marshal Massena orders the Bavarian army to advance towards the border.   His intention is to defend Walchsee, Sankt and Johann and Kitzbuhel and not to cross the border and attack the Austrian army.

General Schwarzenberg orders the Austrian army to halt on the border and resupply.   However he orders 3rd army, south of the river Inn, to cross the border and attack Kitzbuhel. 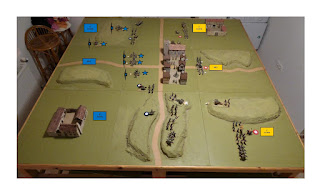 Both armies start the battle at full strength

The French have 9 infantry, 2 cavalry and 2 artillery brigades

The Austrians have 8 infantry, 2 cavalry and 2 artillery brigades

Their orders are to contain the enemy, but not to attack

The Austrians win the battle of Kitzbuhel.

The Austrians open the campaign with an attack on Kitzbuhel, south of the river Inn

Both armies are full strength, but the French also have a conscript brigade as garrison of Kitzbuhel

However both French corps are still in their peace time locations, four hours west of the town

The two corps will then be outnumbered and will attempt to pin, but not attack, the French

The French cavalry advance to attack the guns, but are driven off by the Austrian hussars

The terrain south of the town makes it impossible for 6th corps to deploy at close range of the town.

They exchange fire with 18th French corps, but neither side do much damage

The French played a very defensive game, and paid the consequences.   Both corps were stronger than the Austrian corps opposite.  But neither took advantage and attacked.  In the north this was due to the loss of their cavalry early in the game.   In the south it was due to difficult terrain

The French were outnumbered in the centre, and worse still half of the Austrian artillery were allowed to deploy within close range of the garrison.

The advantage always lies with the attacker.   The defender must deploy first, and the attacker can then concentrate to attack the weakest part of the defence.

Despite this the attacker must gain an advantage, particularly to attack a strong garrison.   This usually puts him at a disadvantage, for example 5th Austrian corps outnumbered by 17th French corps.  But the defender must counter this early in the game.  This is why the French sent forward their cavalry.  But having lost the melee, even though the cavalry did rally later in the game, they were unable to send forward their stronger infantry to attack 5th Austrian corps.

This was disappointing start to the campaign for the French.  However the Austrians needed an early victory to push the French back from their strong defensive positions on the border.